The presidential candidates offered only brief remarks on the budget during the third and final presidential debate. We hosted a
Facebook Live discussion with Steve Bell and Shai Akabas to o
utline the fiscal challenges ahead in 2017 and beyond.

Debate moderator Chris Wallace tried admirably to hold both presidential candidates accountable for their budget plans in last night’s debate. Unfortunately, but predictably, both simply ignored the fiscal elephant in the room that one of them will confront on January 20, 2017.

The Congressional Budget Office currently projects that the national debt as a percentage of gross domestic product (the annual value of all goods and services produced in the economy) is projected to rise from 77 percent today to 86 percent in 2026. Left unsaid was how much worse the problem gets in the following two decades: by 2035, the debt is projected to surpass its record high of 106 percent of GDP, and by 2046 (the end of CBO’s projection period), it would be an unprecedented 140 percent of GDP. 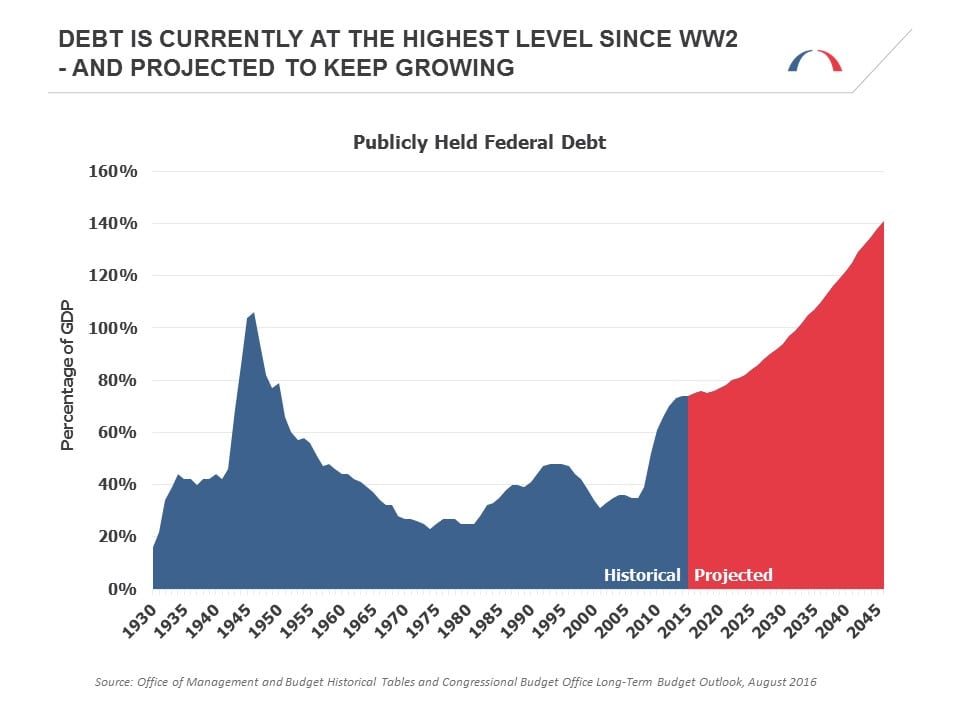 So how would these two candidates prevent such a dangerous outcome? Hillary Clinton pledged that she “would not add one penny to the national debt.” This is an admirable pledge, one that she will hopefully stick to. It is, however, insufficient because it neglects the fact that the national debt is already projected to increase by $2.7 trillion over the next four years and $6.6 trillion over the next eight. “Doing no harm” is simply not enough.

Clinton also constrained her ability to address the problem by pledging to neither cut benefits for entitlement programs nor raise taxes on all but the wealthiest Americans. For illustrative purposes, it is worth noting that stabilizing the national debt as a percentage of GDP solely by taxing the ever-popular “top one percent” of households would require permanently increasing their tax burden by roughly one-third starting next year?and that would just be to cover current spending policies. Should Clinton’s proposals for increased spending be adopted, that tax increase would need to be even larger.

And what of Donald Trump’s tax and spending plans? Numerous independent analyses have found that they would add several trillion dollars to the national debt above current projections in the next ten years alone. Trump’s response was that a growth rate in America’s economy not seen in decades will solve the impending insolvency of Social Security and Medicare and justify his multi-trillion-dollar tax cuts. The non-partisan Tax Policy Center actually found that the debt burden created by his economic agenda would lead to slower growth rather than faster. 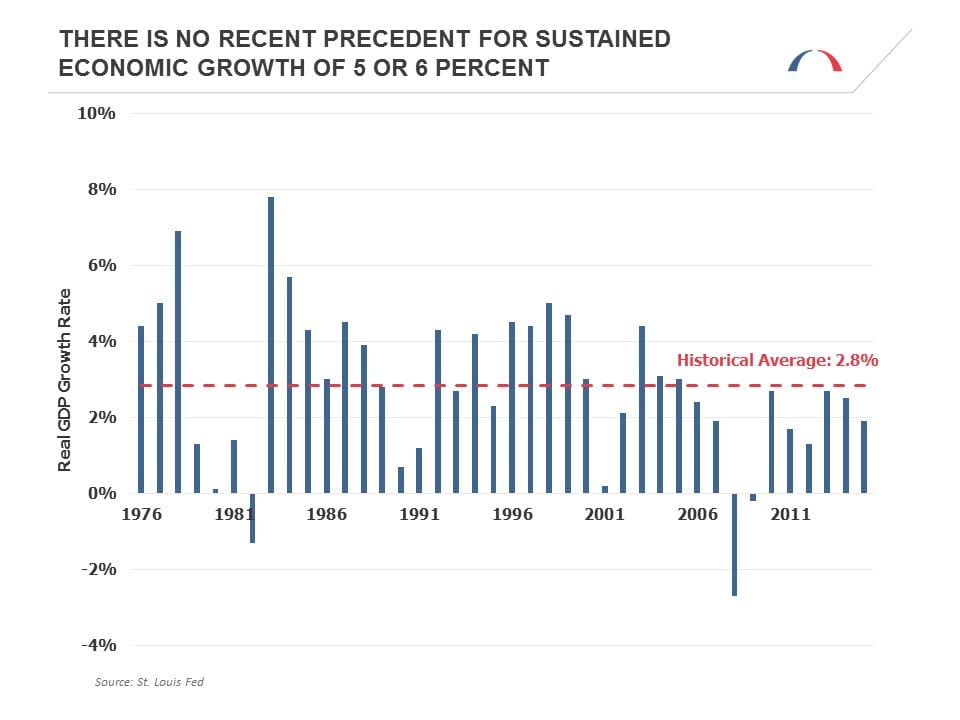 So, once again, those who wish to lead the nation simply ignored the budget elephant in the room. As the chart below shows, we now spend more money on the Social Security and health care benefits that both candidates refused to address than federal investments in defense, science, education, health research, infrastructure and other elements that propel a nation’s economic growth. 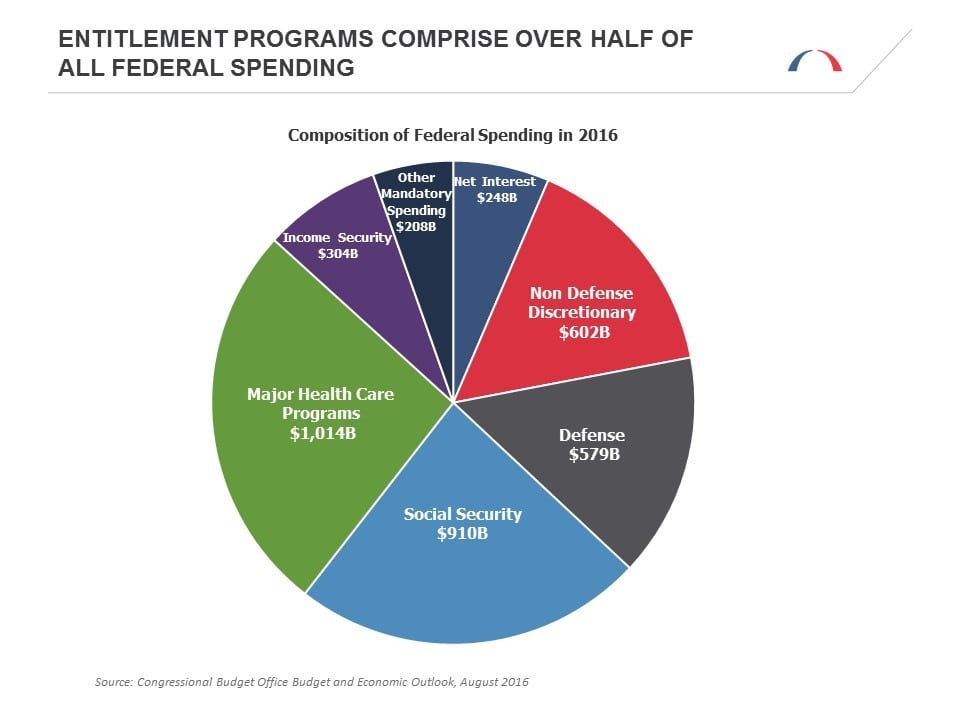 After declining in the years since the financial crisis, projected deficits have now begun an inexorable rise. Driven by demographics and “the new normal” of a historically slow recovery, worsened by very slow global growth, America finds itself reaching debt levels unparalleled in seven decades.

When asked if they would support a “grand bargain on the budget” to address the soaring deficits shown below, both candidates ignored the question. While hopes for a serious budget discussion have been increasingly slim, chances for bipartisan cooperation on an overall budget reform deal next year now seem to be approaching zero. 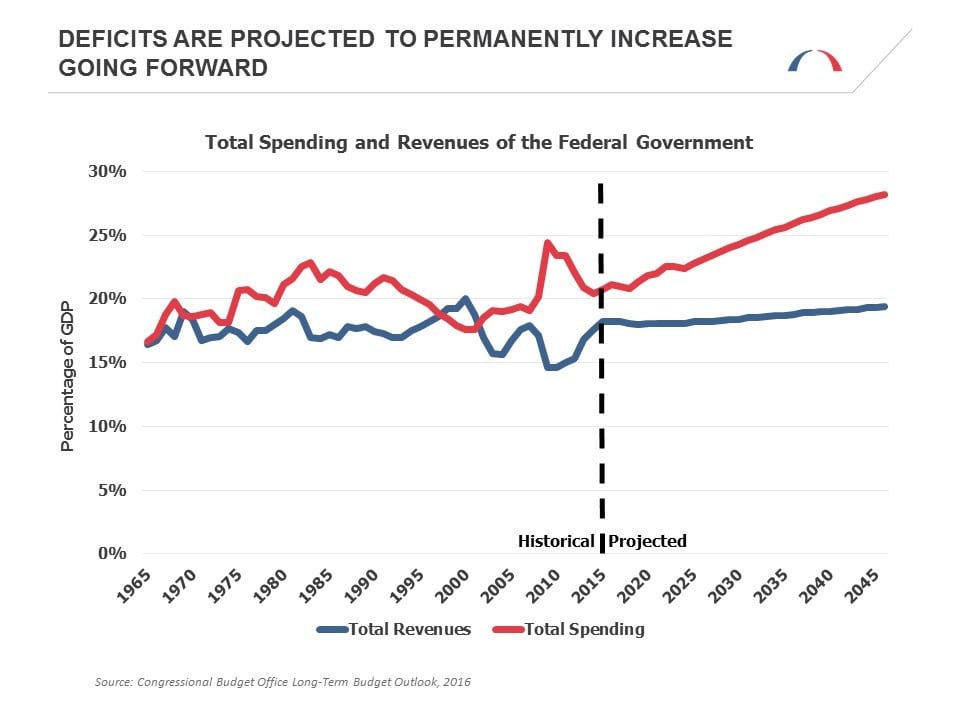 If the budget facts were in question; if the Medicare and Social Security Trustees reports, warning of the impending insolvency of Social Security and Medicare, were questioned by any serious analyst; if the smaller and smaller proportion of the budget going to investments in future economic growth were debatable, then one might excuse policymakers’ hesitancy in proposing solutions to looming dangerous federal debt levels. But none of those facts face serious rebuttal.

What we saw in the last presidential debate of this election was the beginning of another bipartisan cop-out on the budget, a tradition as old as Social Security itself. To quote J. Douglas Brown, the Chairman of the Social Security Advisory Council in 1938, when he was warned that pay-as-you-go financing would create tremendous cost obligations in the future: “[By then] we will all be dead.”

What we saw in the last presidential debate of this election was the beginning of another bipartisan cop-out on the budget, a tradition as old as Social Security itself.

But the problem is much closer today than it was back then. Whether you believe the Congressional Budget Office, which predicts insolvency for both Social Security and Medicare within 14 years, or the more optimistic forecast by the programs’ trustees that Medicare will become insolvent by 2028 and Social Security in 2034, the future of simply ignoring these issues is clear?slower growth, greater debt, a weaker nation.

It is critical for voters to hold the presidential candidates and our lawmakers accountable for solving these challenges that will affect all of us. Elephants, even if ignored, have a bad habit of leaving real messes behind?and we simply can’t continue to leave this one behind for someone else to clean up.