This is the first post in our Budget Challenges Series, which explores the budget challenges facing the next president.

On this day 55 years ago, President John F. Kennedy stood before a joint session of Congress and declared that the United States would pursue what was then an incredibly ambitious goal: sending an American to the moon by the end of the decade. This mission led to record levels of federal investment in research and development (R&D), laying the foundation for many technologies that are integral to the modern economy. Unfortunately, the president who takes office next year will inherit a federal government where commitment to scientific discovery has waned significantly over the last half-century.

There are four main categories of federal spending on research and development, each of which has contributed to our daily lives in ways many of us take for granted:

Federal R&D spending fills a void left by the private sector, facilitating technological advances that are not immediately profitable. Yet despite these clear societal benefits, federal investment in R&D has fallen significantly from its peak during the “Space Race.” At its all-time high in 1964, federal R&D spending amounted to almost 2 percent of gross domestic product. Today, it’s just 0.7 percent, the lowest level in over 50 years. 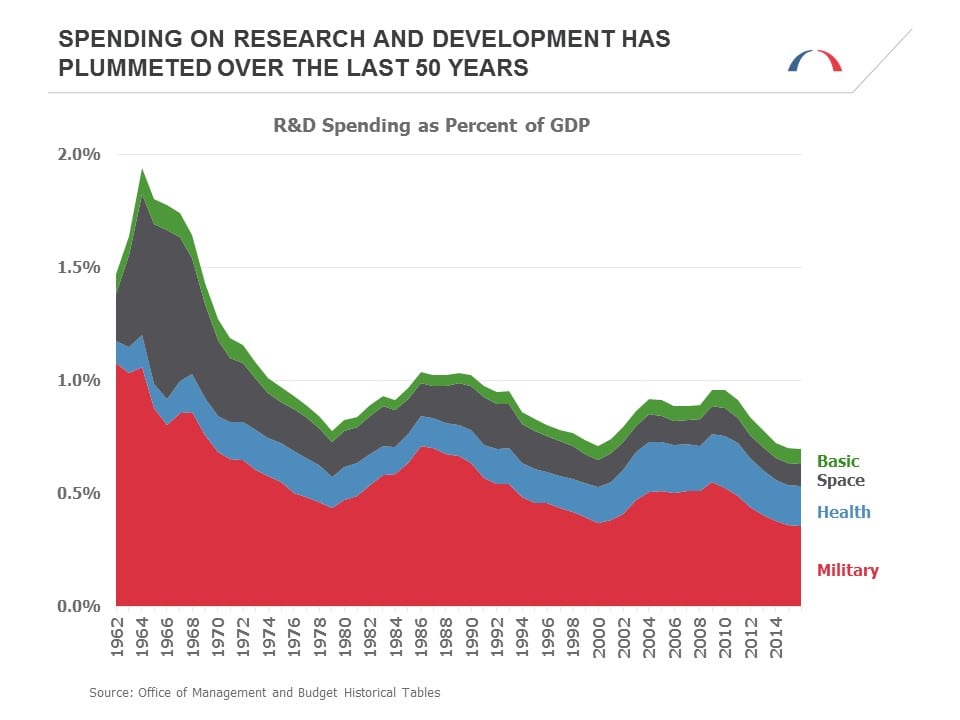 As our society ages and mandatory spending programs such as Social Security and Medicare consume a growing portion of the federal budget, policymakers have struggled to maintain important investments in our future. But in lieu of reforming the largest federal programs or raising additional revenue to fund them, lawmakers instead imposed tight caps on discretionary spending and made them enforceable through across-the-board cuts known as sequestration. Since virtually all R&D spending is discretionary, these tight caps reduce available funding and can stymie projects.

Even interest on the national debt, which only pays for past deficits, is almost twice the size of the total budget for federal R&D.

Reducing spending on R&D to close the federal budgetary shortfall is especially short-sighted given that those investments offer large returns for relatively low costs. All four major categories of federal R&D spending totaled just under $125 billion in 2015. To put in perspective, that’s less than one-seventh the cost of Social Security and barely one-eighth of what the government spent last year on health care services. Even interest on the national debt, which only pays for past deficits, is almost twice the size of the total budget for federal R&D. 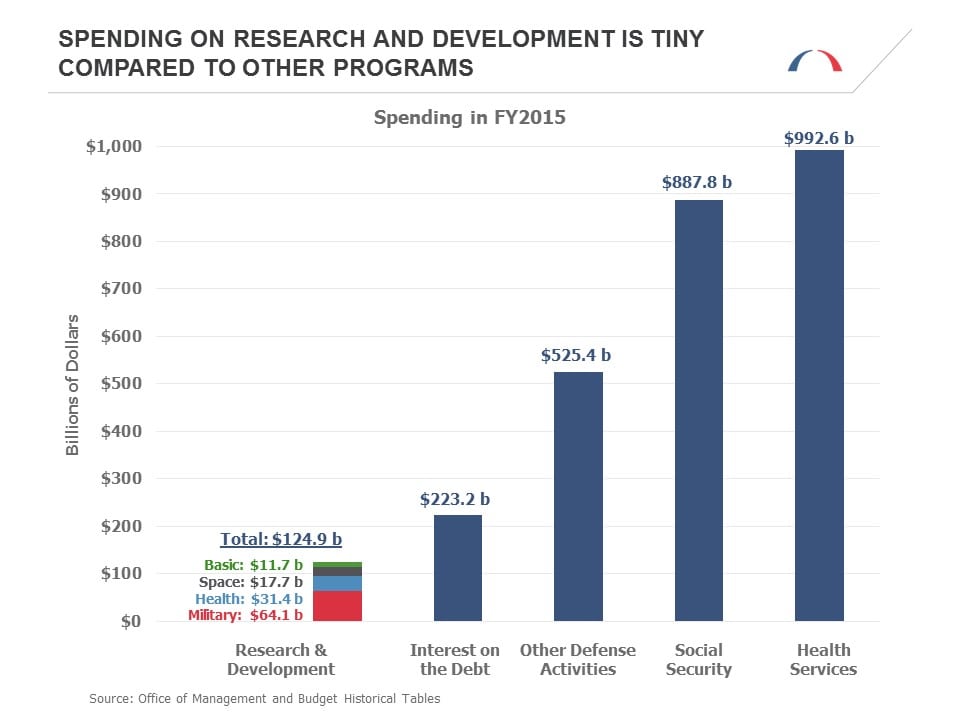 There are some hopeful signs that policymakers may finally be switching course. In last year’s omnibus, Congress provided NASA with $750 million over its original request for Fiscal Year 2016 and gave NIH a $2 billion funding boost for biomedical research, its largest in 12 years. The House also passed the 21st Century Cures Act, which would authorize expanded patient access to new medical treatments and therapies, support critical research, promote safe and effective drug and device development, and advance biomedical innovation. And in President Obama’s final State of the Union address, he called upon the nation to renew its commitment to R&D and announced a “moon-shot” effort to cure cancer.

These are all welcome developments, but they don’t come close to offsetting the steep reductions in funding over recent decades. Furthermore, even these modest investments will be difficult to maintain under tight spending caps and increasing pressure from growing mandatory spending programs. The next president should focus on crafting a budget that increases important investments and pays for them by lowering the rate of growth in mandatory spending programs, increasing revenues, or a combination of the two. Only by doing so can we build upon our legacy as a nation of innovation.

Investing in Innovation is an American Tradition