This is the fourth post in our Budget Challenges Series, which explores the budget challenges facing the next president.

From terrorist attacks by ISIS to alleged cyber-attacks by Russia, there have been no shortage of national security concerns raised during the course of the current presidential campaign. In response, both candidates have pledged to strengthen our national defense to combat these threats. But to do that, the next president will have to confront the Defense Department’s (DoD) increasingly tight budgetary constraints.

As part of a legislative package meant to help curtail the growing national debt, the Budget Control Act of 2011 (BCA) imposed spending caps on both defense and non-defense discretionary spending through 2021. The BCA also required policymakers to identify an additional $1.1 trillion in savings over the next decade, but their failure to do so triggered an automatic reduction in the spending caps, resulting in across-the-board cuts known as sequestration.

If the caps under current law remain in effect throughout the next president’s first term, defense spending would fall to its lowest share of the economy since before World War II.

While the original BCA caps were widely viewed as a necessary step toward getting the nation’s finances in order, the sequester-level caps were never meant to go into effect and are considered by many budget experts to be too restrictive to enable a robust national defense. In fact, if the caps under current law remain in effect throughout the next president’s first term, defense spending would fall to its lowest share of the economy since before World War II. 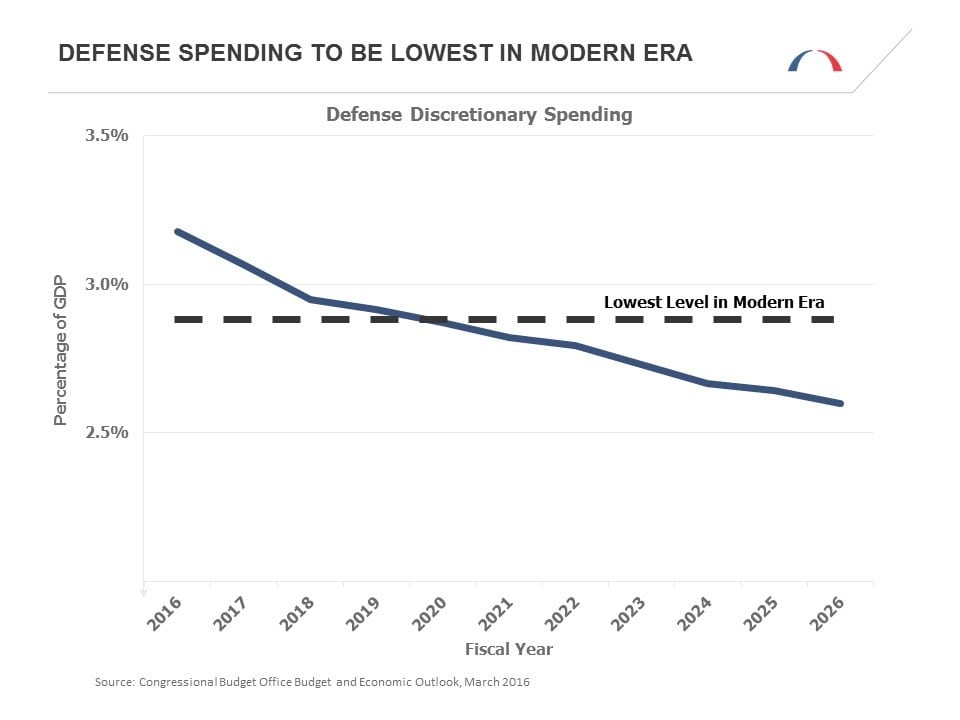 Along with its annual budget submission to Congress, DoD publishes a five-year plan known as the Future Years Defense Program (FYDP). And according to the Congressional Budget Office’s most recent FYDP analysis, DoD proposes to exceed the sequester-level caps by more than $110 billion between Fiscal Year 2017 that starts October 1 and FY 2020 (the last full fiscal year of the next administration’s first term). Yet even this understates the challenges facing the defense budget for the next administration.

In recent years, policymakers have found a number of tricks to work around the caps that the next administration will have difficulty continuing to employ. One tactic has been reclassifying day-to-day expenses as emergency funding for foreign conflicts (known as Overseas Contingency Operations). But as BPC has argued before, this gimmick is both fiscally irresponsible and presents a number of logistical challenges.

Policymakers have found a number of tricks to work around the caps that the next administration will have difficulty continuing to employ.

Another way DoD has stayed below the caps has been by delaying important investments in hardware and equipment. The result is that dozens of major defense purchases are now slated to reach their peak cost in the early- to mid-2020s. These massive acquisition costs create a modernization “bow wave” that appears just outside the five-year FYDP window. As a result, the next administration will either have to increase the defense budget by at least $15-$20 billion per year above what is currently planned (and already in excess of the sequester-level caps) or make difficult decisions about prioritizing and/or cancelling projects that are already underway. 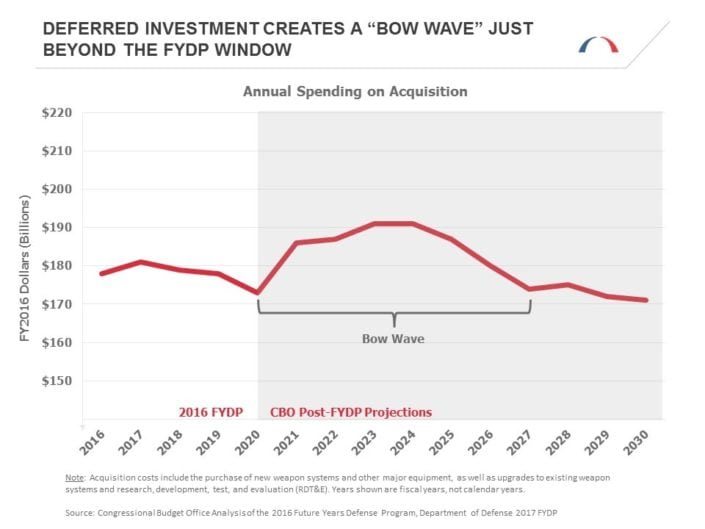 Acquisition bow waves are not a new phenomenon, especially during periods of declining defense budgets when the Pentagon often proposes optimistic acquisition plans and hopes for higher future funding or lower program costs. But the current bow wave has been exacerbated by DoD’s efforts to remain under the caps set by the BCA and subsequent bipartisan budget agreements, making it both larger and more difficult for the next administration to deal with.

The biggest driver of the military’s underlying budgetary problems, however, is the growing cost of its personnel. Ballooning compensation and health care costs are consuming an increasing portion of DoD’s budget and crowding out other important priorities, such as acquisitions and readiness. 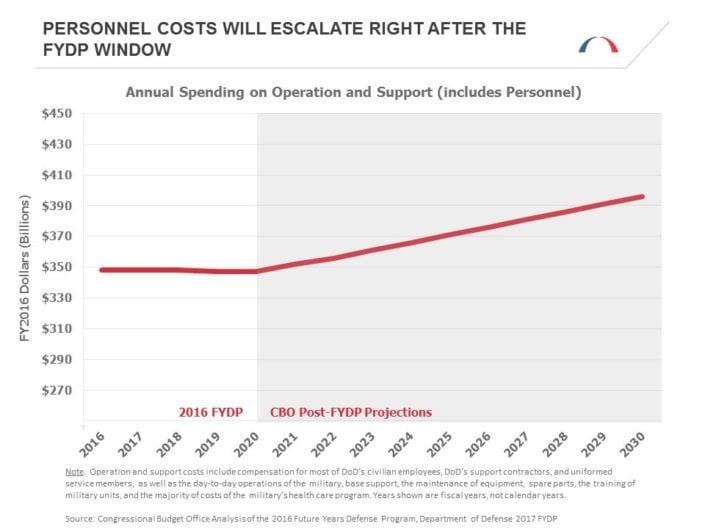 While the FYDP includes several proposed reforms to curb personnel costs, which are counted as part of DoD’s Operation and Support (O&S) budget, CBO notes that “In the past, DoD has misestimated the prices of various elements of its plans or has not been permitted by the Congress to implement some of the policies that underpin its budget submission and associated cost estimates. As a result, the O&S costs of DoD’s plans have often turned out to be different (usually higher) than it anticipated.” Accordingly, CBO’s projections (which are based on historical trends) show O&S costs escalating rapidly outside the FYDP window (during which O&S costs appear artificially flat).

Even if policymakers adopt reforms in this area and modernize personnel systems, there will remain a need to ease the sequester-level caps.

BPC recently convened a Task Force on Defense Personnel, which is examining personnel costs in the context of reforming how the military can best recruit and retain top talent for the future. But even if policymakers adopt reforms in this area and modernize personnel systems, there will remain a need to ease the sequester-level caps, relief which should be paid for with revenue increases and/or changes in federal spending programs. Only by addressing the combination of both internal and external budgetary pressures on the Pentagon can the next president truly ensure a strong national defense.