This is the second post in our Budget Challenges Series, which explores the budget challenges facing the next president.

There is very little that labor unions, business leaders, the three remaining presidential candidates, and bipartisan majorities in both Congress and the electorate all support. Yet one area of the federal budget, at least in theory, remains universally popular: spending on infrastructure. Enthusiasm, however, quickly dissipates when the conversation turns to how to pay for it. The result is years of deferral and neglect that have placed our national infrastructure in serious jeopardy.

In recent years, more than 60,000 bridges have been deemed “structurally deficient” and in need of serious repair. There are 240,000 water main bursts annually. According to an analysis released just last month by the American Society of Civil Engineers (ASCE), an organization that supports infrastructure development, the United States would need up to $1.4 trillion in additional investment beyond what is currently planned over the next decade just to maintain and repair our existing infrastructure. 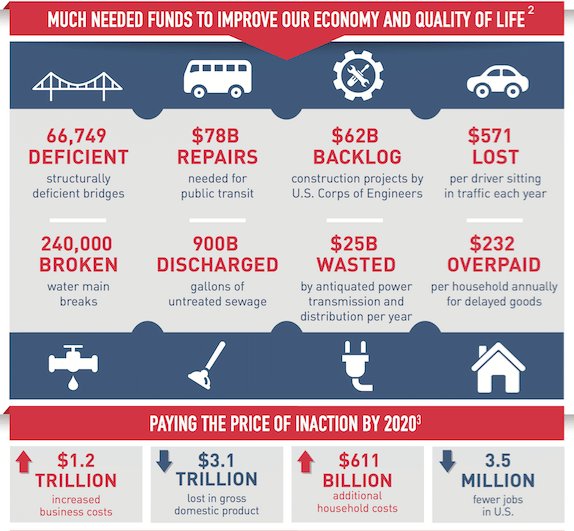 View a larger version of this infographic

Failure to plug this gap would have significant economic ramifications. The ASCE study projects losses of up to $3.9 trillion in gross domestic product and 2.5 million jobs by 2025 if our infrastructure deficiencies are not addressed. ASCE estimates that this would translate into an average cost of $3,400 per year in lost disposable income for each American family. Moreover, the longer we wait to act, the more expensive restoration becomes, as minor repairs increasingly turn into costly overhauls. But instead of acting to address the challenge, policymakers have responded with years of costly can-kicking.

Lawmakers failed to adequately fund the highway bill they passed last year despite the fact that federal highway trust fund spending is actually declining as a percentage of GDP.

The perennial financing shortfall facing the federal highway trust fund is a perfect microcosm of the problem. Since the trust fund’s creation in 1956, it has primarily been funded by motor fuel taxes, which provide a relatively reliable source of revenue. They also create a pricing mechanism that both influences demand for highways and assesses their costs directly to those who benefit. 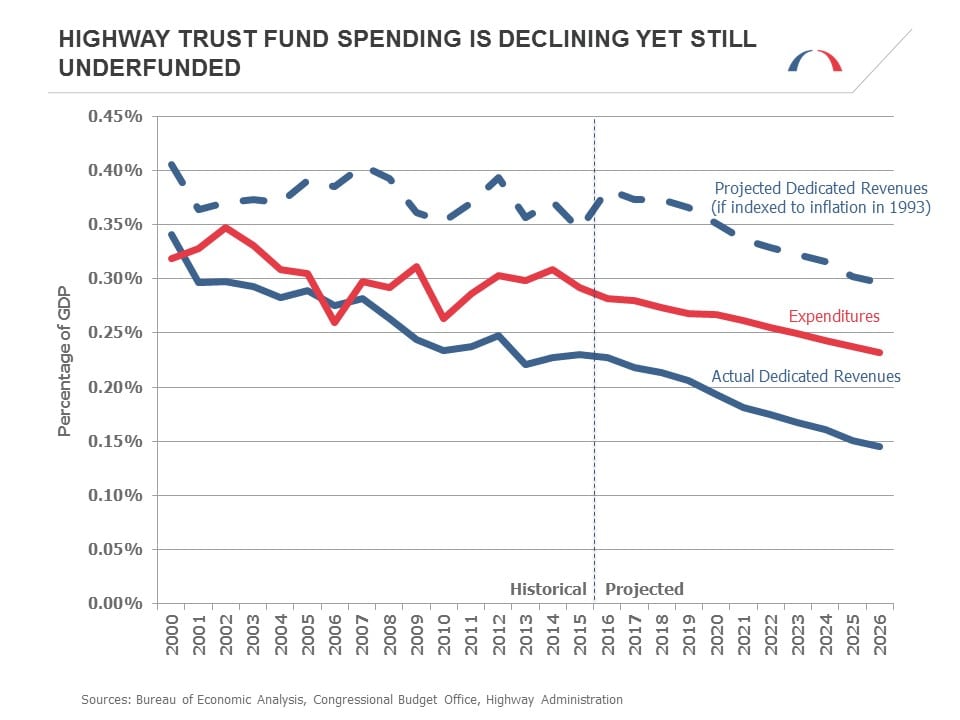 Yet instead of identifying an adequate source of revenue to pay for transportation spending in a fiscally responsible manner, policymakers enacted a series of 34 stop-gaps, which were often “paid for” with general-revenue transfers and budget gimmicks. Lawmakers also failed to adequately fund the highway bill they passed last year?the first multi-year authorization in a decade?despite the fact that federal highway trust fund spending is actually declining as a percentage of GDP.

Such funding shortfalls for the highway program are particularly concerning as the vast majority ($1.1 trillion) of the $1.4 trillion infrastructure investment gap estimated by ACSE is in surface transportation, such as roads, bridges, and public transit.

Fortunately, there is no shortage of solutions that the next president and Congress could implement to address this shortfall. BPC’s Executive Council on Infrastructure recently proposed a comprehensive approach to address the nation’s infrastructure deficit through regulatory reform, public-private partnerships, and a menu of over 20 possible revenue sources that could be tapped by the federal government. Additionally, during last year’s debate over the highway bill, several groups of lawmakers introduced bipartisan proposals that would have restored needed funding to the highway trust fund.

The next president should draw upon these ideas and others to provide a reliable, long-term source of funding for these critical investments in our domestic infrastructure.