While the next president will face countless challenges upon taking office next year, most of them can be found in just one place: the federal budget. The federal budget is more than just numbers on a spreadsheet?it is the blueprint for our government and represents our priorities as a nation. Unfortunately, the next president will inherit a fiscal situation fraught with obstacles.

Under current law, the federal government’s annual budget deficit is projected to top $1 trillion starting in 2022. The national debt, which is the total amount of money borrowed by the government to finance deficits in previous years, is already at its highest level relative to the size of the economy since World War II. The debt burden will only grow further as deficits worsen, requiring the federal government to increasingly borrow from the private sector. 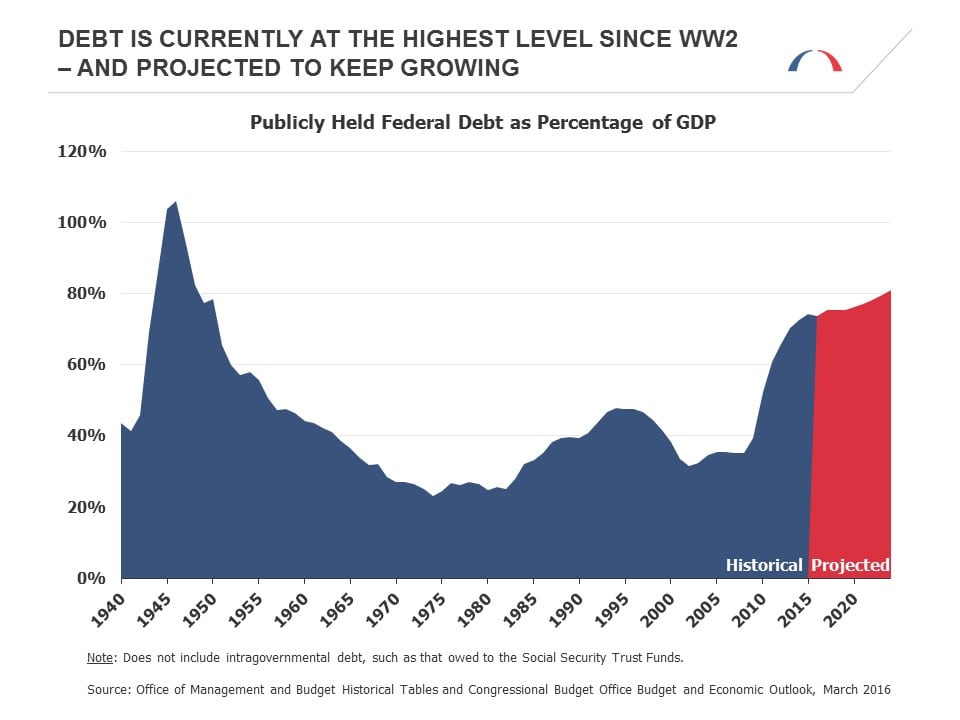 The next president has an opportunity to change course and put the country on a sustainable trajectory towards a brighter fiscal future. But in order to do so, he or she will need to address these seven challenges:

Over the next few months, we’ll explore each of these challenges individually in greater detail. We’ll also analyze some potential solutions. However, if policymakers fail to act soon, the consequences will materialize quicker than they and their constituents might expect.

There are two main categories of federal spending: discretionary spending, which Congress appropriates annually; and mandatory spending, which is predetermined by formula and includes major entitlement programs such as Social Security and Medicare. Last year, mandatory spending programs, along with interest payments to service the growing national debt, consumed 78 percent of the tax revenue raised by the federal government. Just eight years from now, this spending is projected to nearly eclipse all federal revenues. To put in perspective how soon that is: eight years from now the president whom we elect this November could still be in office if re-elected to a second term. 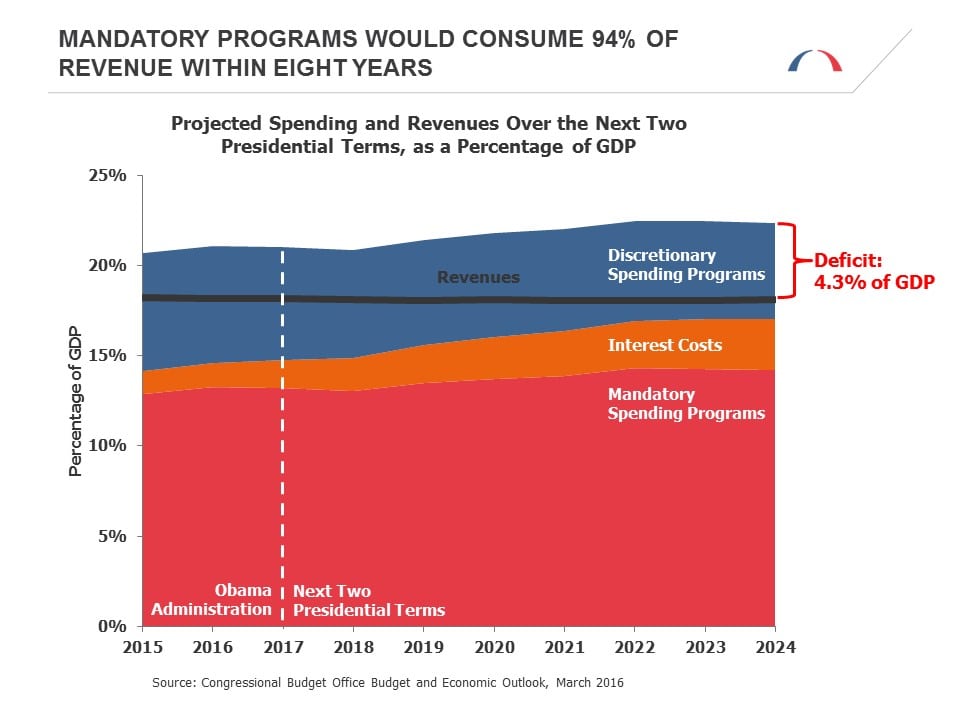 Allowing this imbalance to continue would have serious consequences. With an increasing proportion of the federal budget growing rapidly on auto-pilot, and revenues roughly stagnant, discretionary spending is being effectively squeezed out. This part of the budget includes critical functions of government, such as national defense and domestic investments like infrastructure, education, and scientific research. Failing to address the growth of mandatory spending programs and/or raise the revenue necessary to pay for them makes it nearly impossible to develop a sustainable budget without jeopardizing national security or deeply cutting important investments in our nation’s future that support economic growth.

Therefore, the next president needs to not only reduce the deficit but also do so responsibly. In recent years, policymakers have enacted unpaid-for tax cuts, expanded entitlement programs without offsets, and imposed reckless across-the-board spending cuts in lieu of actually developing a comprehensive budget plan to address the growing national debt. None of these actions alleviated the underlying structural problems facing the federal budget and, in many instances, the changes actually made things worse. The next president and the lawmakers we elect this November simply cannot afford to continue this trend.