This is the fifth post in our Budget Challenges Series, which explores the budget challenges facing the next president. 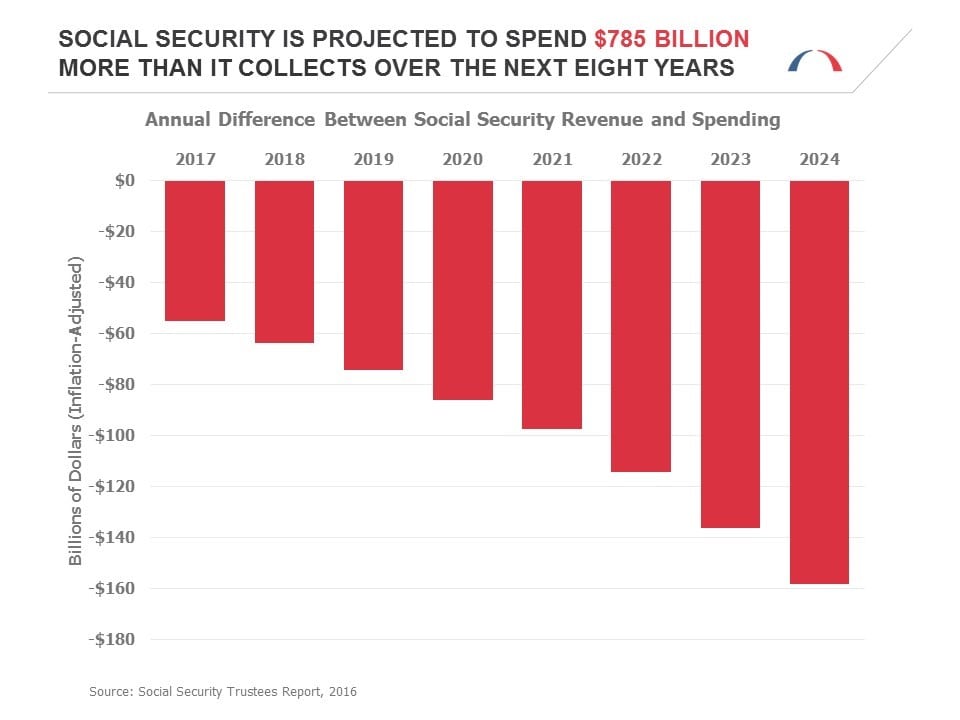 Social Security is the largest program in the federal budget. The program consists of two components: Old-Age and Survivors Insurance (OASI), which last year paid $743 billion in benefits to 49 million older Americans, their dependents, and their survivors; and Disability Insurance (DI), which paid $143 billion in benefits to 11 million individuals with work-limiting disabilities and their dependents. But this week’s report warned policymakers that both OASI and DI are in need of significant reform if they are to continue reliably paying benefits to the people who depend upon them.

Allowing sudden and steep reductions in Social Security benefits would be unconscionable, inflicting the greatest harm on lower-income beneficiaries, who depend on the program most.

Years ago, Social Security collected more in payroll taxes than it spent on benefits. These surpluses were credited to two trust funds: one for OASI and one for DI. But increasing life expectancies have turned these surpluses into deficits, as there are now fewer workers paying taxes per beneficiary collecting benefits. The ratio of workers per beneficiary is projected to continue declining through 2038, at which point the program would be running an annual deficit of $348 billion (in today’s dollars), or about 1.2 percent of gross domestic product. Deficits would then roughly stabilize (albeit at unprecedented levels) relative to program costs in subsequent years. 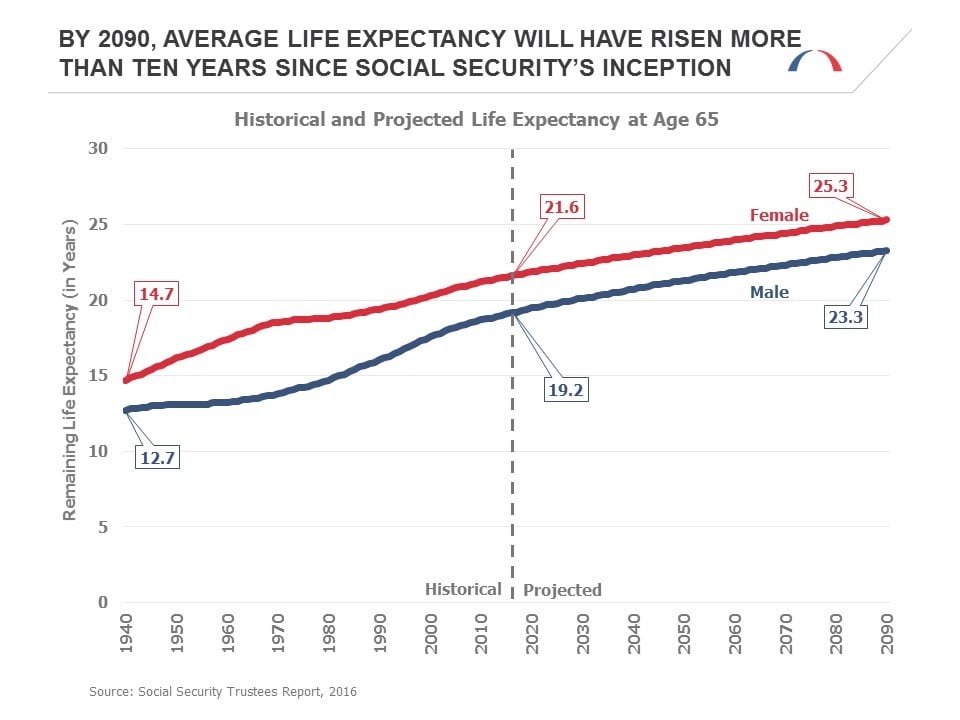 Social Security can continue to pay benefits as scheduled so long as it can make up these deficits by drawing upon its trust funds. But once the trust funds are exhausted, benefits will be limited to what is payable with incoming revenue. According to the trustees, OASI beneficiaries would start having their benefits reduced by 23 percent beginning in 2035 (when the OASI Trust Fund is projected to be exhausted), while DI beneficiaries would have their benefits reduced by about 11 percent beginning in 2023 (when the DI Trust Fund is projected to be exhausted).

Allowing such sudden and steep reductions in Social Security benefits would be unconscionable, inflicting the greatest harm on lower-income beneficiaries, who depend on the program most. For example, estimates prepared for BPC by the Urban Institute show that a 23-percent cut to OASI benefits in 2035 would increase poverty among Americans aged 62 and older by almost half. This outcome must be prevented, but time is running out to do so. 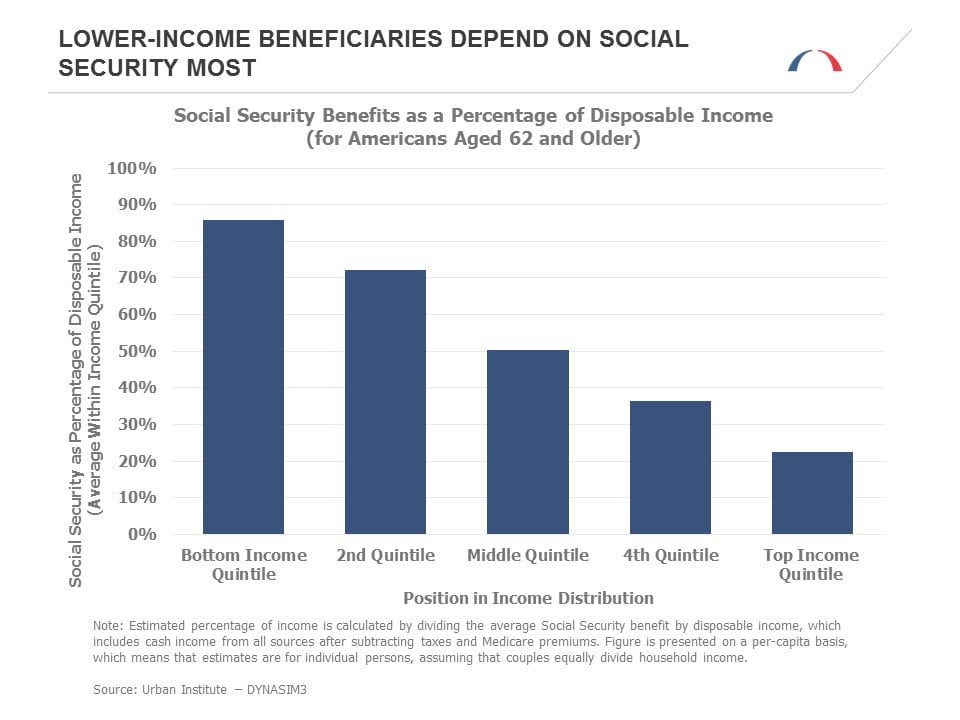 If the president elected this November serves two consecutive terms without addressing Social Security’s shortfall, the DI Trust Fund would be exhausted by the time he or she leaves office. The OASI Trust Fund would, in turn, be just a decade from exhaustion, meaning that policymakers would no longer have the luxury of gradually phasing in the tax increases and/or benefit savings that are necessary to maintain the program’s financing.

There is an alternative: the next president could instead work with Congress in a bipartisan manner to secure the future of Social Security. BPC’s Commission on Retirement Security and Personal Savings provides an excellent model for how this can be accomplished, one that primarily focused on improving the program’s benefit structure and was endorsed by ideologically-diverse commissioners, including former government officials, policy experts, and leaders from both the labor and business communities.

As part of a comprehensive plan to improve retirement security in the United States, the commission proposed a roughly even mix of revenue increases and benefit savings that would make Social Security solvent for 75 years and beyond. Adopting such a package would ensure that today’s workers can plan around and depend upon their Social Security benefits.

The commission’s proposals would not only secure the program’s finances; they would also strengthen work incentives and improve benefit adequacy for the most vulnerable beneficiaries. If these recommendations were adopted in their entirety, not only would OASI benefits be increased above payable levels for Americans across the economic spectrum, but they would be increased above even scheduled levels for beneficiaries at the bottom of the income distribution. Fully adopting the commission’s proposals would cut poverty among Americans aged 62 and older in half relative to what it would be in 2035 if policymakers failed to act. (Separately, BPC’s Disability Insurance Working Group proposed a package of recommendations last year that would improve DI for beneficiaries of that program.)

Social Security is at an important crossroads. If the next president (and Congress) heed the trustees’ warning and act soon, they could significantly improve both retirement security and the federal government’s finances for decades to come.