This is the sixth post in our Budget Challenges Series, which explores the budget challenges facing the next president.

Major federal health care programs (Medicare, Medicaid, the Children’s Health Insurance Program, and the Affordable Care Act’s tax credits and cost-sharing subsidies) comprised more than a quarter of federal government spending (just over $1 trillion) in 2016, making health care the largest category of spending in the federal budget. Moreover, it is also the fastest growing. In the next eight years, health care expenditures are projected to grow more than twice as fast as all other federal spending programs, making health care cost growth containment one of the most significant federal budget challenges facing the next president and Congress.

Between 1989 and 2009, federal health spending grew at a rate of about 7 percent per year (after adjusting for inflation). Roughly half of this growth was due to rapid advances in more effective, and more expensive, new treatments and technology. While the recession caused by the 2008 financial crisis slowed the growth in federal health spending, it is beginning to increase once again, this time as a result of the aging population, among other factors. 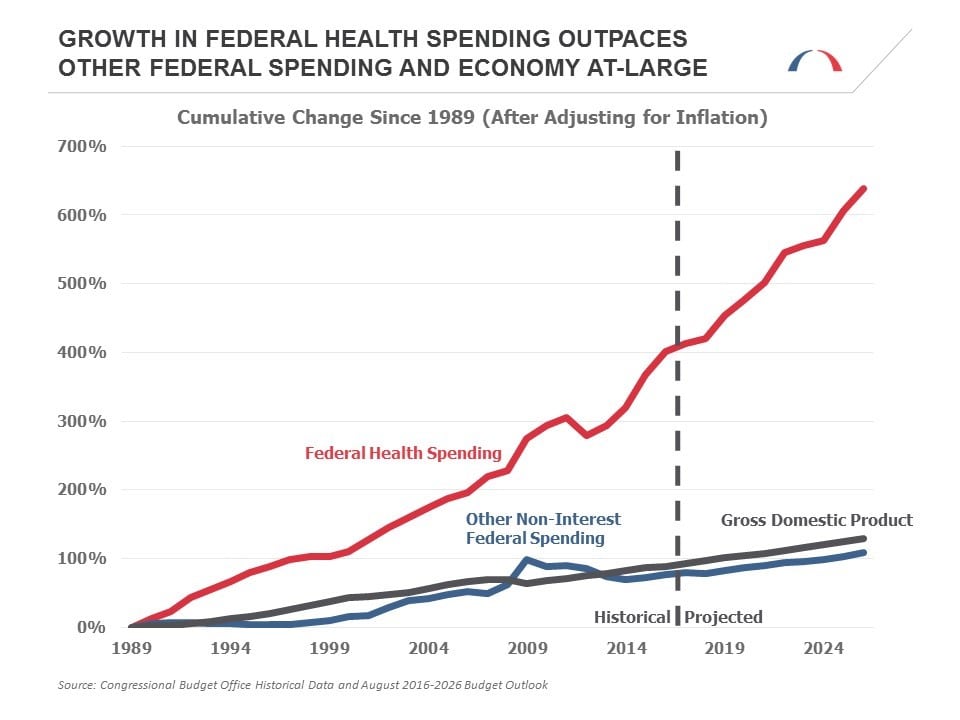 As the Baby Boom generation moves into retirement and life expectancy continues to rise, the proportion of the population receiving Medicare benefits will rise from 17.2 percent in 2015 to a peak of 23.4 percent in 2036. This challenge is similar to the one facing Social Security. But in addition to costs rising due to more individuals receiving coverage, costs per beneficiary are also projected to rise. This too is in part a result of an aging population. Over the next 25 years, the proportion of eligible Medicare beneficiaries who are aged 80 and older will increase from 1-in-4 today to more than 1-in-3, and these older beneficiaries are more expensive to treat than younger ones.

The proportion of the population receiving Medicare benefits will rise from 17.2 percent in 2015 to a peak of 23.4 percent in 2036.

In addition to the increased prevalence of these conditions, the medications required to treat them are becoming more expensive. The impact of this trend can be seen by comparing projected spending for Medicare Part A (hospital services, care in skilled nursing facilities, home health and hospice) and Part B (physician and outpatient services, medical equipment) with spending for Medicare Part D (prescription drugs). While real per-beneficiary spending for Parts A and B combined is projected to grow by 20 percent between now and 2024, per-beneficiary spending for Part D is projected to grow by 43 percent, more than double the growth of the rest of Medicare and quadruple the growth in per-capita GDP. 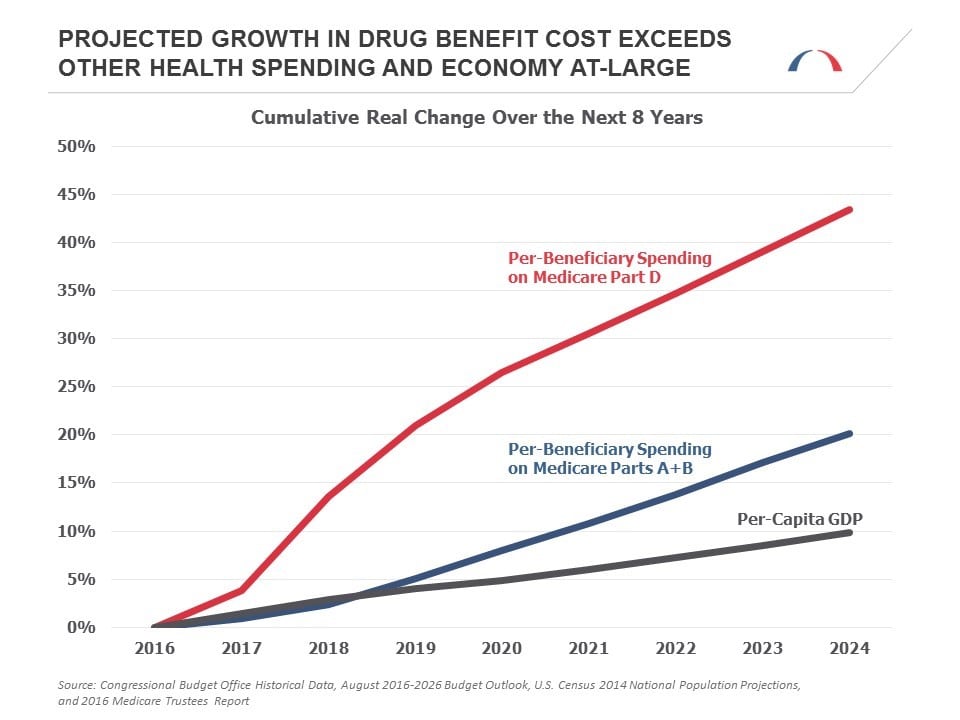 First, they can support and build upon successful efforts already underway to move towards alternative payment models that reward outcomes rather than the quantity of services rendered. BPC’s Health Care Cost-Containment and Delivery System Reform Initiatives offered a number of recommendations to accelerate these system-wide reforms, several of which were included in the Medicare Access and CHIP Reauthorization Act of 2015. Other recommendations are reflected in models under testing by the Center for Medicare and Medicaid Innovation, some of which are already achieving success.

Second, policymakers can draw upon two more recent BPC reports to improve care coordination and outcomes for high-risk, high-needs individuals. BPC offered recommendations to improve the financing of long-term care, and just last month published additional recommendations to reform the delivery of these services and improve integration of care for beneficiaries who are “dually eligible” for both Medicare and Medicaid. These beneficiaries often require long-term services and supports. Implementing the reforms from these two reports would make it easier both for the federal government and the private sector to provide care for an older, sicker population.

Tax levels under current law are insufficient to fully finance projected benefits without making drastic cuts to nearly every other area of the federal budget.

Policymakers can also look to recent BPC forums highlighting issues surrounding affordable medicines. These educational forums examined possible improvements to price transparency and regulatory structures, along with ideas for incorporating prescription drugs into value frameworks and alternative payment models. Such reforms could improve access and affordability of medicines in the U.S.

Finally, the Affordable Care Act included other cost-containment mechanisms that remain politically contentious. Both the Independent Payment Advisory Board and the excise tax on high-cost employer-sponsored health insurance plans (a.k.a. the “Cadillac Tax”) are on track to be triggered during the first term of the next administration. These two provisions could have a substantial impact in reducing the growth of health care costs, the former by capping Medicare spending, the latter by putting downward pressure on the cost of health plans, but many lawmakers want to prevent them from ever going into effect. Delaying or repealing current law cost-containment mechanisms without adopting a suitable replacement (such as the one proposed by BPC last year) could have adverse effects for addressing our nation’s rising health care costs.

The fact is that tax levels under current law are insufficient to fully finance projected benefits without making drastic cuts to nearly every other area of the federal budget. Realistically, policymakers will either have to increase revenues, reduce Medicare spending (through changes in benefits or payment policy), or some combination of the two to accommodate changing demographics and make the program sustainable. The next president and Congress should draw upon BPC’s recommendations and others to ensure a healthy federal budget in which rising health care costs do not crowd out other critical federal spending priorities.

Improving Care for Individuals Dually Eligible for Medicare and Medicaid