The Congressional Budget Office’s recently published Long-Term Budget and Economic Outlook for 2016 features a number of troubling findings that clarify just how big of a fiscal challenge the next president and Congress will face when they take office next year.

Federal debt is on track to reach unprecedented levels

Over the past 50 years, U.S. debt held by the public (which excludes intragovernmental debt, such as that held by the Social Security trust funds) has averaged around 39 percent of gross domestic product (GDP). Despite being below that level as recently as 2008, CBO’s latest report projects publicly held debt will rise to roughly double its historical average before 2020, within the first term of the next president.

Unfortunately, the projections only get worse from there. By 2035, less than 20 years from now, publicly held debt will surpass the all-time high it reached during World War II. And 30 years from now (the end of the report’s projection period), publicly held debt is projected to be over 140 percent of GDP. This means that the national debt would be 40 percent greater than the value of all the services and goods produced by the country in a year, an unprecedented and unsustainable position.

In CBO’s 2015 long-term outlook, it projected that publicly held debt as a percent of GDP would grow by 36 percentage points between now and 2046. But this week’s projection shows a 66 percentage point increase over the same time frame, nearly double the previous estimate. 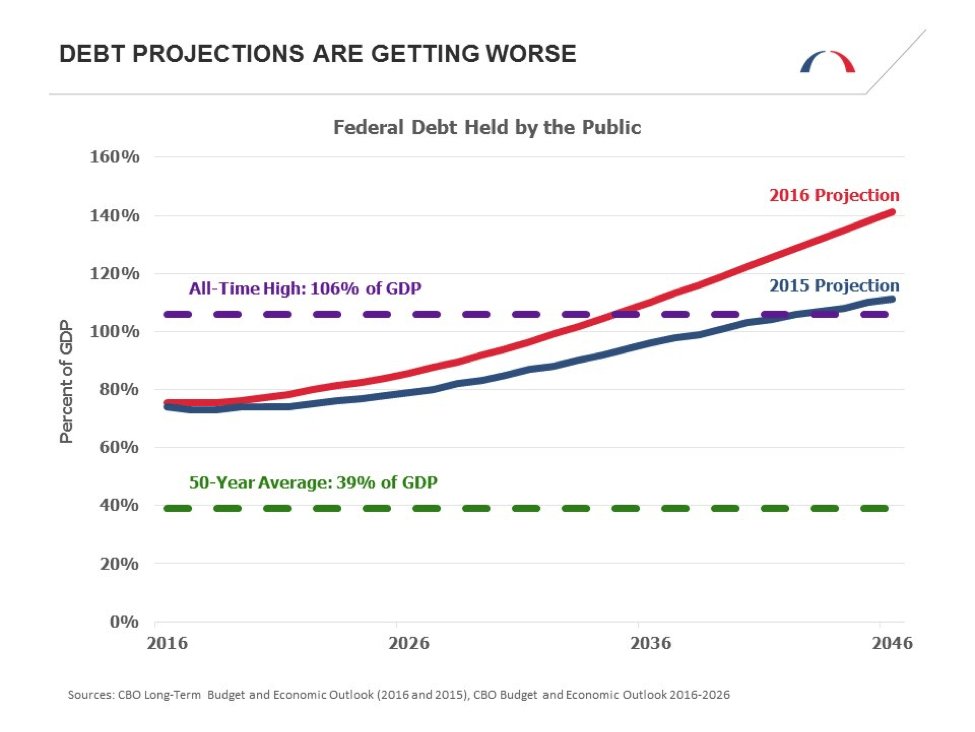 The bulk of this dramatic change is due to the passage of legislation at the end of last year that permanently extended several expiring business tax provisions. This was effectively a massive unpaid-for tax cut, estimated to add $800 billion to the deficit in the first ten years alone. The dramatic increase in CBO’s debt projections over just one year ought to remind policymakers that their decisions have the power to quickly erode the fiscal outlook.

The dramatic increase in CBO’s debt projections over just one year ought to remind policymakers that their decisions have the power to quickly erode the fiscal outlook.

A smaller factor contributing to the worsening debt picture is a change in CBO’s methodology. In a departure from previous projections, this year’s report incorporated macroeconomic effects into its estimates. The drag on GDP that is assumed to result from such high debt levels makes the debt appear even larger as a relative percentage.

This year’s federal budget deficit will be equal to roughly 2.9 percent of GDP. Yet in 2046, CBO projects the government’s annual deficit will reach 8.8 percent of GDP, more than triple its current value. Larger deficits mean that not only will the total debt be greater, but the rate at which it grows will also increase. The ballooning deficit is largely due to the mismatch between tax revenues and the rising cost of federal entitlement programs (plus interest payments to service the growing national debt).

Today, spending on Social Security and major health programs, such as Medicare and Medicaid, totals about 10.4 percent of GDP. In 30 years, they’ll be more than 15 percent of GDP. If policymakers allow these programs to grow as such without raising additional revenues to pay for them, interest costs to service the swelling national debt will more than quadruple (from 1.4 percent of GDP today to 5.8 percent in 2046).

All other spending is being crowded out

While major entitlement programs are expected to grow substantially over the next 30 years, all other non-interest spending is projected to shrink relative to the size of the economy. Such spending currently equals 9.2 percent of GDP, but by 2046, that will fall to just 7.3 percent, a reduction of more than one-fifth, which would leave that category below its lowest level in the modern era.

After 2037, every penny of incoming revenue will be consumed by just three things: Social Security, major health programs, and interest on the debt. A full decade before then, total mandatory spending (which includes these three categories plus all other automatic spending not annually appropriated by Congress) will start consuming all incoming revenue. That means just 10 years from now, there will be nothing but debt available to fund any of the discretionary programs that provide critical investments in our future and keep our nation safe, a highly impractical proposition.

After 2037, every penny of incoming revenue will be consumed by just three things: Social Security, major health programs, and interest on the debt. 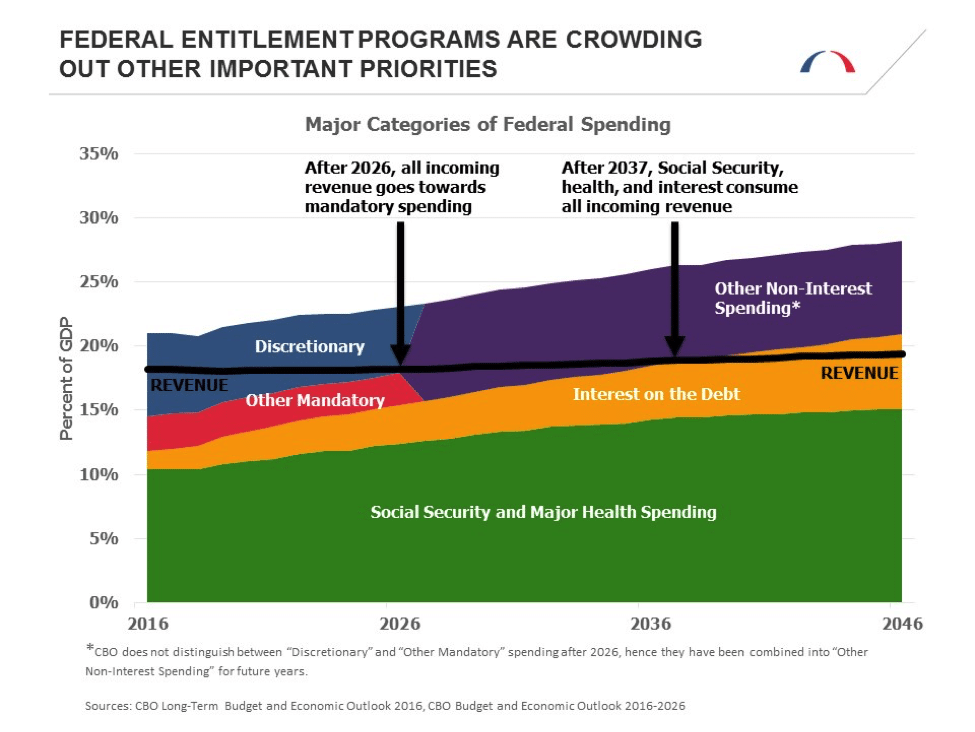 Social Security is in serious trouble

The squeeze on non-entitlement spending is not the only symptom of our unsustainable fiscal trajectory. CBO predicts that Social Security’s combined trust funds will be exhausted by 2030, four years sooner than was estimated by the program’s trustees just last month. At that point, CBO estimates that beneficiaries would face an across-the-board cut to benefits of almost 30 percent, even steeper than the 21 percent predicted by the trustees. The difference in these estimates is largely due to differing assumptions on economic growth and interest rates; CBO has been reducing its estimates after years of sluggish growth, while the Social Security Administration’s chief actuary has generally remained more optimistic.

The warnings of both CBO and the Social Security trustees serve as important reminders of the financial straits facing the nation’s largest public program. Policymakers would be wise to work in a bipartisan manner to strengthen and secure the future of Social Security, as BPC’s Commission on Retirement Security and Personal Savings recently recommended.

Amid all the gloom-and-doom projections, CBO reminds policymakers about the benefits of gradually implementing reforms that reduce the deficit in a responsible and sustainable way. CBO’s report estimates that phasing in $4 trillion of deficit reduction over the next decade would both stabilize the national debt and increase economic output by almost 5 percent at the end of the projection period.

But there is a flip side: if policymakers act to make deficits substantially worse (as they did with last year’s tax legislation), it will lead to harmful economic consequences. CBO modeled an illustrative scenario in which total deficits over the next ten years are increased by $2 trillion and found that economic output would be almost 4 percent lower at the end of the projection period than it would be under current law, resulting in real annual household incomes thousands of dollars below current projections.

Against the backdrop of a campaign in which both major party presidential candidates have offered expensive policy proposals, some of which would increase deficits by more than seven times the amount modeled in CBO’s illustrative scenario, the latest CBO report serves as another important reminder of the fiscal constraints facing the next administration.