This is the third post in our Budget Challenges Series, which explores the budget challenges facing the next president.

A major topic of discussion on the campaign trail this year has been the personal debt burden placed on students and their families and the rising cost of attending college. The average sticker cost of tuition and fees for a four-year public university has almost quadrupled since 1975 (even after adjusting for inflation). As a result, students are increasingly dependent upon federal assistance programs for financing their education. Yet not only do policymakers disagree about the appropriate structure of these programs?they aren’t even sure how to measure the associated costs.

Of the many ways that the federal government subsidizes higher education, student loans have become by far the largest. The number of students with outstanding federal loans has increased by 44 percent since 2007 (from 28.3 million to 41.7 million), while the average balance of these loans has increased by 59 percent (from around $18,000 to $30,000 per borrower). In total, there is currently over $1.2 trillion in outstanding federal student loan debt.

The number of students with outstanding federal loans has increased by 44 percent since 2007.

Unfortunately, a potentially toxic combination of low repayment rates and high loan volumes could soon place a significant strain on the federal budget resulting in increasing future public debt. Ironically, a policy designed to help students today prepare for their future may also be placing an additional burden on them when it comes time to fund that future debt.

Around 3.4 million borrowers are between 31 and 360 days delinquent on their payments and hold a cumulative loan balance of $70 billion. But even those without delinquent debt are struggling to reduce their loan burden: in 2014, just 63 percent of borrowers were able to put a dent in their principal balance within three years of their loans going into repayment.

Low repayment is in part due to the many options borrowers have that allow them to avoid making monthly payments without risking delinquency or default. Borrowers who experience economic hardship, return to school, or pursue military service can enter forbearance or deferment. Under these regimes, monthly payments are suspended, though interest continues to accrue. Currently, 22 percent of the total federal student loan balance is in deferment or forbearance, totaling $269 billion.

The federal government also offers a variety of income-driven repayment (IDR) plans, which are designed to provide flexibility to struggling borrowers who have trouble meeting their monthly payments under the standard, 10-year repayment plan. Under IDR plans, the borrower’s monthly payments are tied to their income level, with loan forgiveness occurring after a given number of years (generally 20 or 25, depending on the plan).

The number of direct loan borrowers, those who borrow directly from the federal government, enrolled in IDR plans has tripled in just the last three years, from 1.6 million to 4.9 million. This rapid growth creates significant budgetary uncertainty, as these arrangements are relatively new and it is difficult to predict what percentage of these borrowers will end up having their loan balances forgiven before being fully repaid.

Predicting the long-term budgetary effects of the federal student loan portfolio is further complicated by the ongoing debate over the appropriate methodology used to forecast costs. The Congressional Budget Office (CBO) uses the rules laid out by the Federal Credit Reform Act of 1990 (FCRA) to project the program’s cost over the next 10 years. According to these estimates, the federal loan portfolio will actually generate $38 billion in savings between 2016 and 2025. However, CBO also provides an alternative set of estimates using a separate methodology known as fair value accounting. Under fair value, the federal loan portfolio is projected to cost taxpayers $190 billion over the same timeframe. 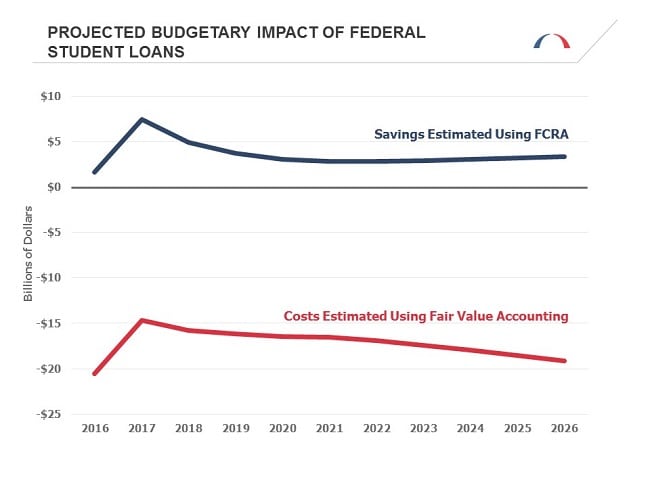 How can these projections differ so wildly? The answer lies in varying assumptions about the discount rate, a calculation that is used to quantify the present value of future cash flows. Under FCRA, the discount rate is tied to the interest rate on U.S. Treasury bonds, which some analysts believe is appropriate because the government can borrow more easily and with less risk than private firms. Meanwhile, fair value ties the discount rate to the market-value interest rate, which is essentially the interest rate that borrowers would receive for a comparable loan on the private market.

Market interest rates for student loans are higher than the interest rate on U.S. Treasury bonds for two reasons. First, students are inherently riskier borrowers than the federal government. Supporters of fair value believe that it is a more accurate method, as it accounts for such risk. The higher market interest rate, however, is also due to the fact that private lenders have a higher cost of raising capital than the government (because they too are riskier borrowers than the Treasury). Opponents of fair value accounting argue that adopting it would have the government account for a cost that it does not actually incur.

But regardless of how federal student loans are scored, the long-term budgetary effects of the system are a concern that the next administration and Congress will need to consider. Rather than continuing to pump tens of billions of dollars into the current system, policymakers should look to address the root causes of rising tuition in a way that controls costs for both students and taxpayers.