Spending on transportation in the U.S. has been run off the road by policymakers who have neglected to arrange a sustainable source of revenue on 32 different occasions between 2008 and 2014. That figure reached 33 last month as Congress passed a two-month stopgap, ensuring another funding crisis by the end of July. With both the House Ways and Means and Senate Finance Committees holding hearings this week on the long-term financing of the highway program, here’s a look at why exactly transportation programs are underfunded.

The highway bill, which was originally designed to last for six years, provides authorization for highway infrastructure and public transportation projects. Those projects are carried out by states and paid for by grants from the Highway Trust Fund (HTF). Since its creation in 1956 under President Dwight Eisenhower, the HTF has primarily been funded with user fees, meaning that the transportation system is supported by motor fuels taxes levied on the motorists who utilize it. Taxes on users, if set at an appropriate rate, can provide a reliable source of revenue; they can also create a pricing mechanism to both influence demand for the system and assess its costs directly to those who benefit. 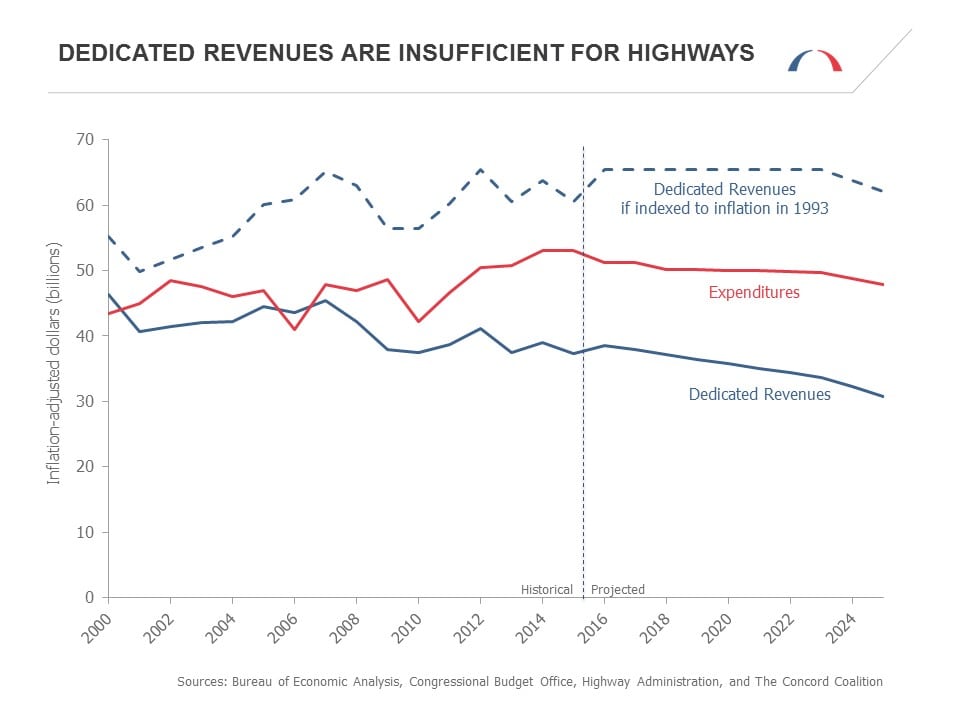 Unfortunately, the 18.4-cent tax per gallon of gasoline and the 24-cent tax per gallon of diesel fuel no longer provide an adequate source of revenue for the HTF, largely because neither has been adjusted for inflation since being set at those levels back in 1993.1 That inadequacy has left the HTF perennially unable to fully fund transportation programs since the early 2000’s and allowed a disturbingly large portion of the country’s transportation infrastructure to fall into disrepair.

Instead of addressing the shortfall in a fiscally responsible way, policymakers have repeatedly funded transportation spending through a series of stop-gaps that have been “paid for” by general revenue transfers and budget gimmicks. These stopgaps have already taken over $50 billion from general government revenues and are projected to cost three times that much over the coming decade if the current trend continues?talk about highway robbery!

The stopgap passed last month expires on July 31. If the highway bill is allowed to expire, expenditures would no longer be authorized from the HTF. Similarly, if the trust fund is exhausted (now projected to occur around the same time), expenditures would be limited to incoming revenue. This would force states to delay or cancel infrastructure projects, threatening tens of thousands of jobs and wasting billions of taxpayer dollars.

With such a threat constantly overhead, state and local governments have struggled to make strategic decisions about transportation projects. In fact, many projects have already been stalled because the uncertainty caused by short-term stopgaps impedes the ability of states to negotiate contracts with construction companies. Passing a fully-funded, six-year highway bill would provide states with the certainty they need to effectively carry out their responsibilities.

The act, which already has 31 bipartisan cosponsors in the House, would immediately index motor-fuels taxes to inflation and borrow an amount equal to the additional revenue to be generated over the next 10 years from the general fund. This would allow full funding for transportation programs through 2016. In the meantime, a bipartisan commission would seek to propose a new funding mechanism. If the commission fails to come up with a proposal, or Congress refuses to enact it or an alternative by the end of 2016, taxes on gas and diesel would automatically be increased in two phases to cover transportation spending for the remainder of the decade.

The key strengths of this proposal are its bipartisan support and the fact that it would guarantee states a reliable source of transportation funding for the foreseeable future. Additionally, this approach would promote discussion of a wide variety of alternative funding mechanisms, such as adopting a vehicle-miles-traveled tax or increasing the use of tolls, which would meet two important criteria: maintaining the “user-pays” principle on which the HTF has historically been based and avoiding erosion from ongoing changes in fuel efficiency that are beginning to impact the gas tax base.

Other bipartisan proposals?the UPDATE Act introduced last Congress by Reps. Earl Blumenauer (D-OR) and Tom Petri (R-WI), and another approach by Sens. Bob Corker (R-TN) and Chris Murphy (D-CT)?would also return the trust fund to a sustainable path for an extended period of time by raising motor fuel taxes. The Joint Committee on Taxation also just released an overview of options for addressing the long-term shortfall in the HTF. With many sensible proposals already introduced, and with both the expiration of the highway bill and the exhaustion of the HTF only months away, policymakers should shift gears, stop detouring around the problem, and drive towards a long-term solution.

1
A potential longer-term issue for the HTF revenue base is that vehicles are becoming more fuel efficient.