It will be years before the total cost of Hurricane Harvey’s devastation is known, but an emergency federal spending package is coming into focus as policymakers return to Washington this week from the August recess. Proposals for an initial down payment are on the order of $8 billion, but recognizing the scale of destruction, the full government response will likely total in the tens (if not hundreds) of billions of dollars.

The timing of this spending has implications for Congress’s upcoming battle over the debt limit. With only about a month to go until BPC’s projection of the debt limit “X Date,” when the federal government will be unable to pay all of its bills in full and on time, some key questions arise: How would not raising the debt limit affect emergency spending? How will emergency spending on Hurricane Harvey affect the federal government’s ability to meet all its obligations?

How would going beyond the “X Date” affect emergency spending?

If the “X Date” is reached without legislation extending the debt limit, emergency response payments for Hurricane Harvey could be delayed. In fact, Treasury Secretary Steven Mnuchin raised this possibility over the weekend.

Since reaching the point when the federal government is unable to fully pay its bills would be unprecedented, there is high uncertainty as to how Treasury would or could respond. The outcome would depend upon a combination of the Treasury Department’s operational capabilities and decisions made by Secretary Mnuchin. BPC’s latest debt limit report outlines two possible scenarios should the debt limit not be raised by the “X Date”: either Treasury would prioritize payments, making some federal payments and not others, or all payments would be delayed (with the potential exception of interest payments).

Notwithstanding operational and legal challenges, if the Treasury prioritized payments, it is unclear where emergency spending would rank. On any given day, Secretary Mnuchin may have to decide whether those payments should be made before or after Social Security benefits, Medicare provider payments, or military active duty pay. If emergency response payments were not prioritized, those payments would not be made until policymakers extended the debt limit.

Should the Treasury choose to delay all payments, emergency spending on Harvey would presumably also be delayed. BPC’s projections indicate, for example, that if the “X Date” occurred on October 2, payments on that day would be delayed until October 6.

How does emergency spending affect the “X Date”?

Relief spending has begun and will grow in the days leading up to the “X Date.” But based on the federal government’s spending patterns after Hurricanes Katrina and Sandy, emergency spending on Hurricane Harvey will have only a minimal effect on the “X Date.” Relief, recovery, and rebuilding funds are disbursed gradually, meaning that most of the federal government’s assistance will occur far beyond the timing of this year’s debt limit impasse. Only a relatively small amount of emergency spending will go out the door prior to BPC’s projected “X Date” range of early to mid-October.

Emergency spending on Hurricane Harvey will have only a minimal effect on the debt limit “X Date.”

As shown in the figure below, although total spending for Hurricanes Katrina and Sandy was high, the amount occurring in the initial months that followed each storm represented a small percentage of the total. Specifically, Department of Homeland Security emergency response spending totaled $6.8 billion and $4.5 billion during the two months immediately after Hurricanes Katrina and Sandy, respectively. By comparison, the average federal spending for a single day in October is $16.2 billion in BPC’s 2017 projections. 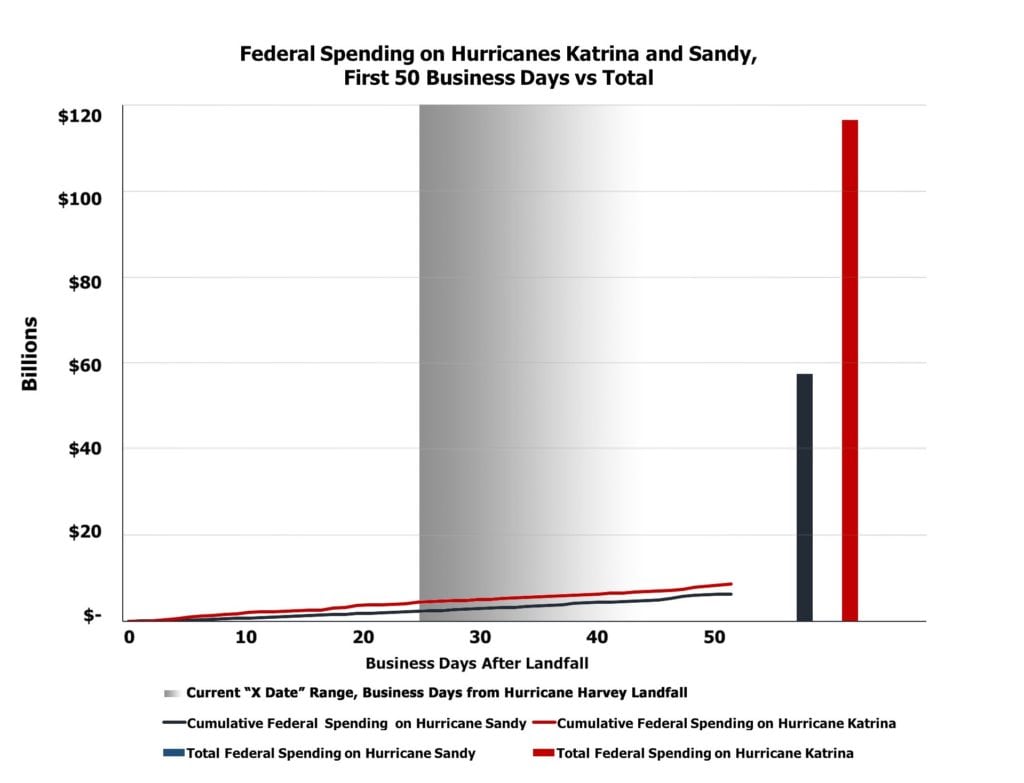 Source: BPC analysis of daily Treasury statements, Congressional Budget Office
Note: Daily totals for emergency spending represent all DHS emergency preparedness and response spending in nominal dollars. The totals do not account for spending from other agencies in response to Hurricanes Katrina and Sandy, or conversely, emergency spending that may have gone to other purposes. Spending on days for which data are not publicly available is assumed to increase at a steady rate between days with observable spending. The total federal spending bars are also in nominal dollars and incorporate spending from several different agencies.

Hurricane Harvey ups the stakes on the debt limit

Even though Hurricane Harvey relief spending will have minimal effect on BPC’s “X Date” range, the urgent need for funds raises the stakes for policymakers to come to a deal to extend the debt limit. On top of significant risks to the economy, failing to extend the debt limit before the “X Date” could now put the timing of emergency relief payments in jeopardy. These complications add to the list of considerations for policymakers as they negotiate a response to Harvey, federal spending for Fiscal Year 2018 (which begins October 2), and action on the debt limit.