As the debt limit “X Date” approaches, much attention is justifiably paid to the potential consequences of an unprecedented federal default. Often lost in the mix are warning signs that appear ahead of time, which in and of themselves carry costs for American taxpayers. These costs materialize well before the “X Date” , the point at which the federal government is unable to fully pay its bills.

The federal government borrows money using Treasury bills, notes, and bonds, all are backed by the full faith and credit of the United States, making them some of the safest investments on the market. Credit rating agencies have long labeled U.S. debt as AAA or AA+, the two highest ratings available. As a result, the interest rates that the U.S. pays on its borrowing is extremely low relative to most other debt in the global economy.

Lost in the mix are warning signs that appear ahead of time, which in and of themselves carry costs for American taxpayers.

Despite the long-term stability of Treasury securities, a recent study by Federal Reserve researchers found that approaching the debt limit “X Date” increased the government’s borrowing costs by hundreds of millions of dollars in 2011 and 2013. The costs increase when interest rates rise on Treasury bills, indicating that investors are demanding higher rates of return from the government to hold that debt.

A Government Accountability Office study similarly found that the 2013 debt limit impasse increased government borrowing costs by tens of millions of dollars in just that year,  and much more if calculated over the duration of all the debt that was issued.

This year, investor concerns have already surfaced in the market for U.S. securities. There has been a sharp interest rate increase for 3-month Treasury bills that mature shortly after the early to mid-October “X Date” projected by BPC and the Congressional Budget Office. The increase indicates that, as in 2011 and 2013, the federal government will incur increased borrowing costs from this year’s debt limit impasse.

Many factors can cause fluctuations in government borrowing rates, but the timing of these market reactions is almost certainly a signal that investors see a heightened possibility, however remote, that Treasury may be unable to pay its debts back on time and in full. The interest rate of these short-term bills peaked in late July at 1.16 percent, the highest level observed since 2008. These bills mature in the second half of October, timing that could coincide with market disruptions should the “X Date” arrive without any action on the debt limit. 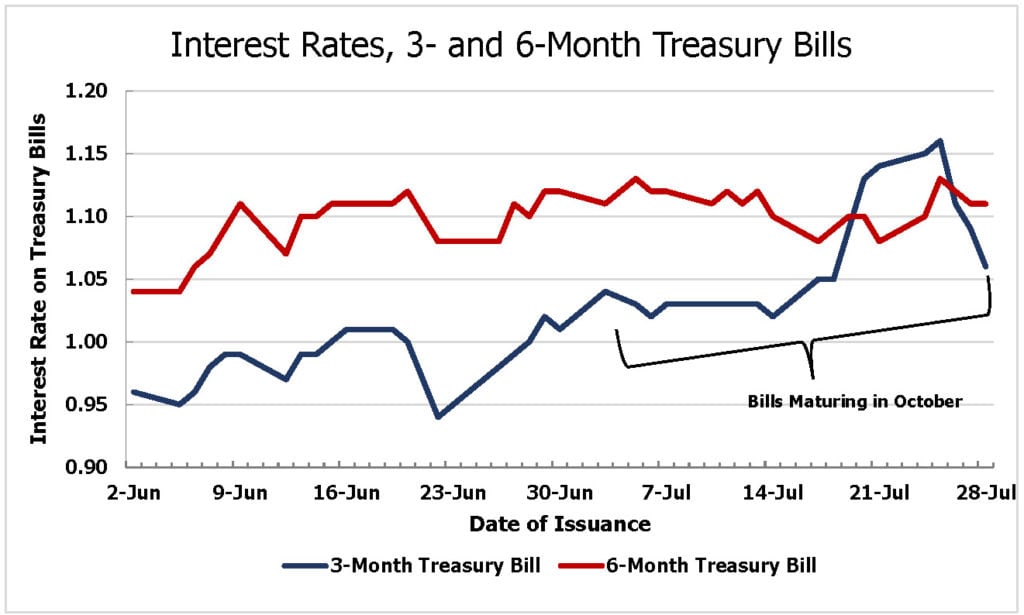 As the figure above shows, the yield for 3-month bills maturing right after the “X Date” range actually surpass the returns on longer-term 6-month Treasury bills that were sold at the same time. This is called an “inversion of the yield curve,” because in general, interest rates for longer-term securities are higher than shorter-term securities. Since 2007, inversions of the value of the 3-month with the 6-month Treasury bill have only occurred on three occasions: during and following the 2007/2008 financial crisis, during the debt limit impasse in 2013 for a single day’s worth of auctions, and last month. This is a clear sign that a potential default is on the minds of the federal government’s creditors, and they are accordingly demanding a higher price to hold 3-month Treasury bills.

The spike in 3-month Treasury bills is not the end to the potential costs of this year’s debt limit impasse. While their interest rates have since reverted back to their trend line, other short-term Treasury bill rates, such as the 4-week bill, may also experience fluctuations as the “X Date” draws closer. Additionally, the market for credit default swaps on U.S. sovereign debt may expand and contract in response to this “X Date” episode, as it did in 2011. So, while these debt-limit driven market signals, seen and unseen, will fade after this impasse is resolved, they will not do so without leaving behind long-lasting financial consequences for the federal government, and ultimately, taxpayers.