On March 16, 2017, the debt limit was reinstated from its suspension, and the Treasury Department began to implement its so-called “extraordinary measures” to continue meeting all of the federal government’s financial obligations. BPC’s updated projections show that, absent legislative action, those measures and the cash they generate will only last until October or November 2017. The day those measures are exhausted and Treasury runs out of cash on hand, known as the “X Date,” the federal government would no longer be able to pay its bills in full and on time.

The Congressional Budget Office (CBO) in its own projection similarly estimates that the X Date will most likely arrive in fall 2017.

All of these projections carry significant uncertainty, due to the unpredictable nature of the federal government’s cash flows. Moreover, major changes in fiscal policy or economic conditions could impact the timing of the “X Date.”

For basics of the debt limit and extraordinary measures, see The Debt Limit at 100: What you need to know and Extraordinary Measures, Simplified

The State of Play

Similar to 2015, the tax-season timing of the debt limit reinstatement allows extraordinary measures to last longer than other occasions when the federal government has bumped up against the debt limit. By mid-March most tax-refunds have typically been paid out, while April is among the strongest financial months of the year for the federal government, as revenue flows into Treasury’s coffers from individual tax returns. The March reinstatement also allows Treasury to take advantage of certain extraordinary measures that only become available in June and September.

While extraordinary measures will provide Treasury with necessary breathing room, operating at the debt limit carries costs. Many Treasury employees spend time (that would normally be spent on other work) executing extraordinary measures and ensuring that the debt does not exceed its limit on a day-to-day basis. In addition, delayed action on the debt limit can increase Treasury’s borrowing costs. The Government Accountability Office estimated that the debt limit impasse of 2013 cost the federal government $38 million to $70 million in that year alone.

Fitting in action on the debt limit will be difficult with a congressional calendar already packed with deadlines. Fiscal Year (FY) 2017 appropriations for the federal government are scheduled to run out on April 28. Without appropriations, the government would undergo a partial shutdown, ceasing operations and closing everything deemed “non-essential,” such as national parks. While finalizing FY2017 funding, Congress will also need to review and conduct hearings on the new administration’s FY2018 budget. Beyond just the budget, President Trump and congressional leaders have set out an ambitious legislative agenda, planning to repeal and replace the Patient Protection and Affordable Care Act, pass large-scale tax reform, and enact a large infrastructure package all within the next year. Though Treasury Secretary Steven Mnuchin sent a letter urging Congress to raise the debt limit as soon as possible, it is not yet clear how addressing the debt limit fits into lawmakers’ broader goals.

How does BPC project the “X Date”?

Projections of the “X Date” rely on three main factors: Treasury’s cash on hand, the amount of extraordinary measures available, and the Treasury Department’s daily cash flows. Each of these areas has its own nuances that need to be accounted for in estimates of the “X Date.”

Due to uncertainties in Treasury’s daily cash flows it is impossible to predict a specific day on which Treasury will run out of cash and extraordinary measures. To deal with this uncertainty, we provide an “X Date” range, a window that will narrow as additional data become available over the course of the year. 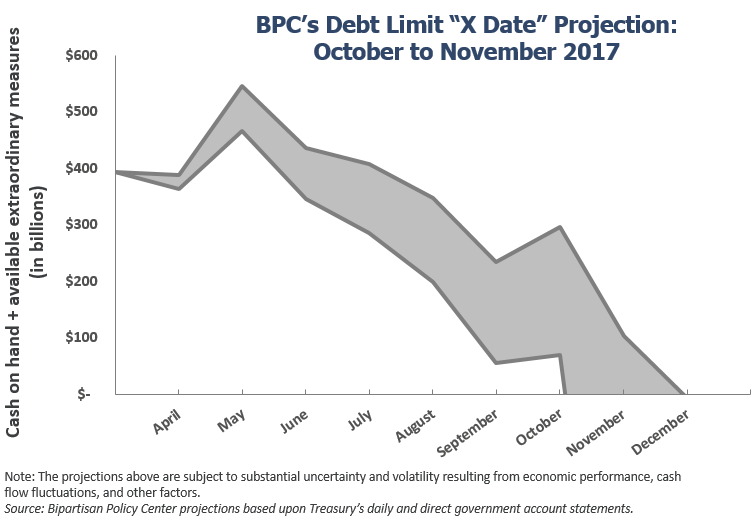 BPC’s projections are based on current policy and historic trends and are subject to substantial uncertainty. Consequently, they could shift due to dramatic changes in fiscal policy or economic conditions. Heightened volatility around tax revenues this year make our estimates particularly uncertain. We will update these projections when appropriate.

Download the PowerPoint: The Debt Limit: 100 Years and Counting

Updated for some minor clarifications on July 12, 2017.