This BPC-staff authored post is the 10th in a series that will outline the state of retirement in America and provide a sense of the challenges that the commission seeks to address in its 2015 report.

For more information on the topics below and in the rest of this series, see our recently released staff paper, A Diversity of Risks: The Challenge of Retirement Preparedness in America.

Eligibility criteria for many programs, such as asset tests, are set at the state level. In some of those programs, like LIHEAP and SNAP, most states have eliminated stringent asset tests in favor of income tests alone. Medicaid asset tests vary by state and whether the beneficiary qualifies because of age, disability, very high health care and long-term care expenses, or another category of eligibility.

The federally administered program that retains the strictest asset test is the Supplemental Security Income (SSI) program. SSI provides a safety net by guaranteeing a minimum level of cash income to all people aged 65 and over and to people with disabilities who are under age 65. Payments to beneficiaries ensure a minimum income of 74 percent of the federal poverty guidelines for individuals and 82 percent for couples. Although small, SSI plays an important role in retirement income for the poorest Americans, who may not be eligible for Social Security or who may receive very modest Social Security benefits. As of April 2014, SSI provided benefits to over two million Americans over age 65 and to over six million Americans with disabilities.

The asset limit in SSI counts almost all of a beneficiary’s non-housing assets (with the exception of cars up to a certain value), including retirement accounts, and the limits have not been updated for inflation in over 40 years. Applicants to SSI are ineligible if they have more than just a few thousand dollars in liquid assets. 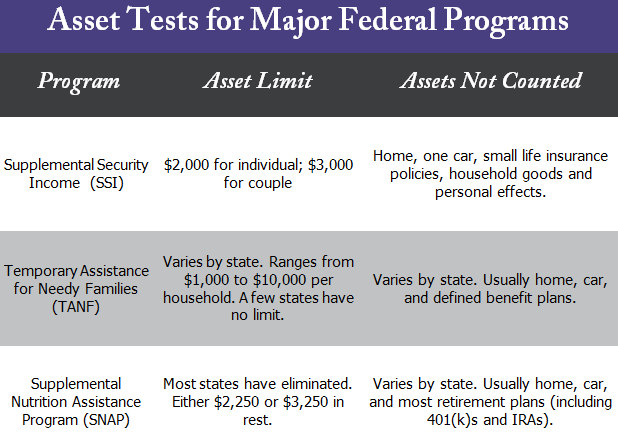 Asset tests also incentivize (and in many cases, necessitate) people who need long-term services and supports (LTSS) to spend down their savings. Our fifth blog in this series, “Needing Help: Long Term Care Risk,” explained that individuals with LTSS needs who do not have sufficient insurance often end up spending down almost all of their non-housing assets until they qualify for Medicaid.

Asset tests are clearly a strong savings disincentive for Americans who benefit from means-tested programs. Those individuals are effectively penalized for saving — even what little they may be able to — for retirement or other purposes. The small amount of assets permitted does not allow program recipients to build up even a modest rainy-day fund, making participants unlikely to save at all. BPC’s Commission on Retirement Security and Personal Savings is examining asset tests and other challenges that low-income Americans face in their attempts to save.

Up Next in Retirement in America:
#11: The $1.2 Trillion Problem Hurting Americans’ Savings
#12: One Big Asset: Homeownership
#13: Social Security and You

Register for “Starting to Save: Innovations for Working America”