On December 8, 2017, the debt limit suspension authorized by Congress’s September budget deal will expire, following which the debt limit will be reinstated at approximately $20.4 trillion. Absent legislative action, BPC projects that the debt limit “X Date” when the Treasury Department can no longer meet the federal government’s financial obligations in full and on time will arrive sometime in March 2018. This is similar to the recent Congressional Budget Office projection that the Treasury Department would run short on cash in late March or early April.

Barring a new budget agreement that includes an extension of the debt limit, the federal government will bump up against its borrowing limit immediately after December 8. Treasury Secretary Steven Mnuchin is expected to once again implement so-called “extraordinary measures” accounting maneuvers that temporarily allow the government to continue meeting all of its obligations. BPC estimates that Treasury has approximately $270 billion in extraordinary measures available with roughly $50 billion in cash on hand.

These maneuvers would be exhausted within several months, and at that point, Treasury would be running on fumes, with no borrowing authority and only a limited amount of cash reserves available (supplementing incoming revenue) to pay the bills. Because the federal government operates on a deficit, that cash would eventually run out, forcing Treasury to miss or delay federal obligations, with the possibility of severe consequences for the economy 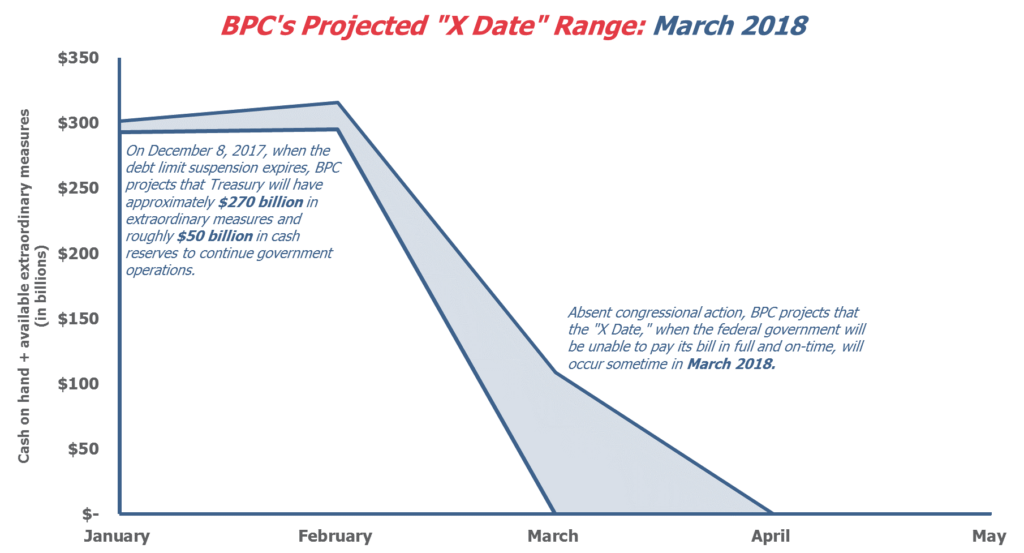 Note: The projections above are subject to substantial uncertainty and volatility resulting from economic performance, cash flow fluctuations, and other factors. Dates on axis indicate beginning of month.
Source: Bipartisan Policy Center calculations based upon Treasury’s daily and direct government account statements

BPC’s debt limit projections carry significant uncertainty due to the unpredictable nature of the federal government’s cash flows and the possibility of unforeseen changes in either fiscal policy or economic conditions. This uncertainty is heightened further by the lack of clarity on major policy issues like tax reform, Fiscal Year 2018 spending levels, and disaster relief funds.

What has changed since the last time the U.S. government bumped up against the debt limit?

When the debt limit was last reinstated in March 2017, we gave an overview of the methodology behind BPC’s projections, which consist of three main factors: the Treasury Department’s cash on hand, the amount of extraordinary measures available, and Treasury’s cash flows. Because these components are dynamic, the timing for each debt limit episode is unique. In March, an October “X Date” was projected. Since then, key factors have changed, and extraordinary measures and cash on hand likely will not last as long as they did earlier this year.

Timing of Treasury’s cash flows. Treasury cash flows are by far the most uncertain variable in our projections, because they are highly volatile on a day-to-day (and even monthly) basis. As shown in the figure below, the months that follow December are typically cash flow neutral or negative for the U.S. government. February in particular drains federal coffers more than any other month during the year because many tax refunds are distributed that month. This contrasts with the last debt limit episode in March, when Treasury benefited from a large cash influx in April as federal income tax returns came due. 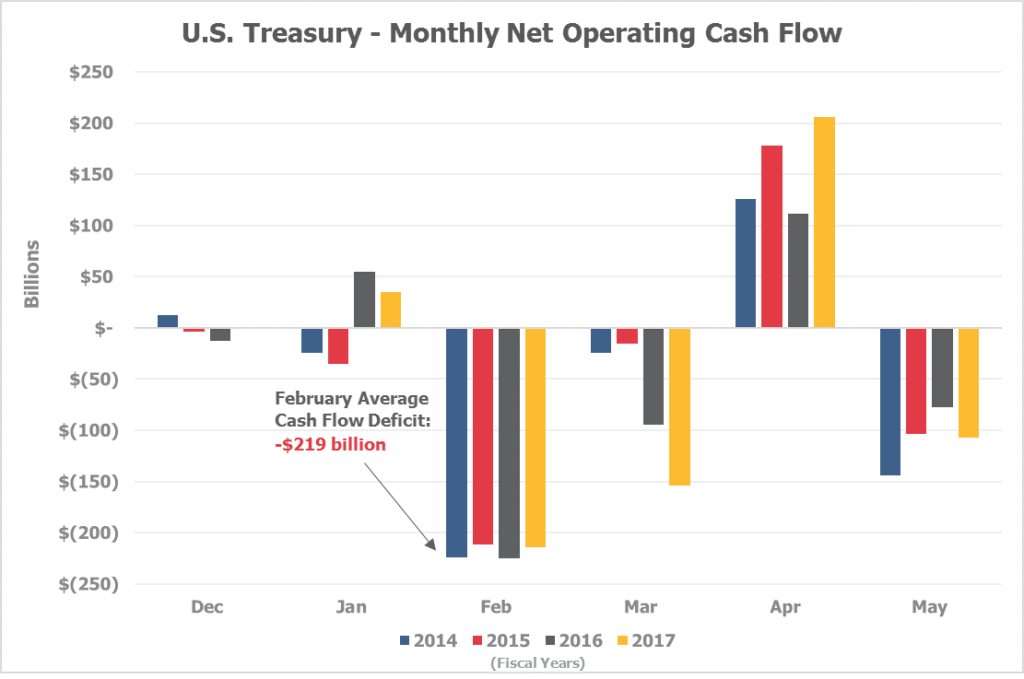 Increased Disaster Spending. Elevated federal spending on disaster relief can accelerate “X Date” timing. In 2017, the United States and its territories were struck by three major hurricanes and severe wildfires. So far, Congress has appropriated tens of billions of dollars in supplemental disaster spending for the areas affected by these storms, but the funding to date has been described as only a “down payment.” Under any scenario, outlays from the federal government for emergency spending will continue to be elevated in the coming months, as the funds that have been allocated are spent. An additional disaster relief package, however, would increase those outlays further.

Fiscal Year 2018 Federal Appropriations. Policymakers are currently debating appropriations levels for FY 2018. If a deal is reached that increases defense and/or domestic discretionary spending significantly relative to prior years, this could move the “X Date” closer.

Tax Reform. The Joint Committee on Taxation’s cost scores, both traditional and dynamic, of the latest tax reform packages being debated in the House and Senate indicate that the bills would reduce revenues in Fiscal Year 2018 (which runs from Oct. 1, 2017 to Sept. 30, 2018). If a tax reform bill becomes law, it could affect BPC’s projections as individuals and corporations modify (primarily reduce) their tax withholdings, lowering federal revenues in the months following enactment. Financial analysts have also projected that tax reform could cause a one-time payment from the Treasury Department of approximately $10 billion to $20 billion to Fannie Mae and Freddie Mac.

Any one of these changes alone would likely be insufficient to warrant an adjustment to BPC’s “X Date” range, but a combination of them or an accompanying shift in economic circumstances could alter the landscape. BPC will continue to monitor these and other issues that could affect the debt limit “X Date” and publish updates as warranted.

Also, this blog originally stated Treasury will have an additional $23 billion of cash-on-hand available on December 8. This figure has been corrected to roughly $50 billion. At this time, the adjustment is not significant enough to affect BPC’s “X Date” projection.