Early in the morning of August 24, Turkish forces finally did what the United States had long been asking them to: they launched a major offensive, called Operation Euphrates Shield, against the Islamic State (ISIS) in Syria. This offensive comes two years after the United States launched its own anti-ISIS campaign, which begs the question: what took Turkey so long?

The most obvious answer, and the one given in many press reports, is that this offensive is a reaction to the August 20 suicide bombing of a wedding in Gaziantep, which killed 54 and is believed to have been orchestrated by ISIS and potentially carried out by a child. But this attack was not the first ISIS attack in Turkey, nor was it the deadliest. Moreover, as data collected by BPC shows, after past ISIS bombings, such as the June 2016 attack on Istanbul airport or the October 2015 attack on a peace rally in Ankara, Turkish reprisals have been very limited. Thus, the Gaziantep attack alone is not enough to explain the impetus for Operation Euphrates Shield. It is more likely that Turkey finally realized that their policy of ignoring the ISIS threat was actually undermining one of their chief priorities in Syria: preventing the emergence of an autonomous Kurdish political entity.

Turkish reprisals had been very limited after past ISIS bombings.

The critical divergence between U.S. and Turkish policy in Syria occurred in September 2014, when ISIS laid siege to the predominantly Kurdish border town of Kobani. Ankara turned a deaf ear to the pleas of Syrian Kurds for help in repelling the attack, even though it offered humanitarian assistance to civilians fleeing the fighting. Turkey, it seemed, was willing to tolerate ISIS so long as it was helping suppress Kurdish aspirations for self-rule in Syria. Indeed, Turkey has done little to support the fight against ISIS, it was only a year after President Barack Obama announced the formation of an international coalition to fight ISIS that Turkey joined it and gave the United States access to its airbases.

Washington, on the other hand, heeded Kobani’s pleas, airdropping weapons and supplies to Kurdish fighters. It also understood Turkish reluctance to engage ISIS at Kobani to mean it would have to seek other on-the-ground partners to combat the terrorist threat. And the Kurds proved able and willing to be those partners. From those initial airdrops at Kobani grew a robust relationship between the United States and the Kurdish Peoples’ Protection Units (YPG). Now, two years later, the U.S. provides air support for YPG operations and has deployed Special Forces units to train and advise Kurdish fighters.

Today, Turkey might very well rue its decision to refrain from intervening at Kobani since it actually resulted in empowering Syrian Kurds and drawing them closer to the United States. Two recent events suggest that the YPG’s strength and ability to carve out an autonomous enclave is growing.

Turkey decision to refrain from intervening at Kobani drew the Syrian Kurds closer to the United States.

First, on August 12, the YPG and other rebel forces, fighting together under the banner of the Syrian Democratic Forces, took the vital town of Manbij from ISIS. This set the stage for the YPG to rout ISIS from the remainder of the territory it held along the Syrian-Turkish border. Were it to do so, the YPG would gain even greater international renown and U.S. support as the vanquishers of ISIS. Perhaps more worrying for Turkey is that the Manbij victory meant the YPG was on the cusp of conquering a swath of land that would connect thus far disparate Syrian Kurdish enclaves into a single, contiguous body, the prerequisite for a Kurdish play for independence.

Second, Turkish perception of a growing Kurdish brazenness might have been further supported by the YPG’s recent willingness to take on the Assad regime. For most of the five-year-old Syrian civil war, the YPG and Assad forces have avoided clashing. But on August 22, the YPG launched an operation to take the city of Hasaka, which had been divided between YPG and regime-controlled sections. 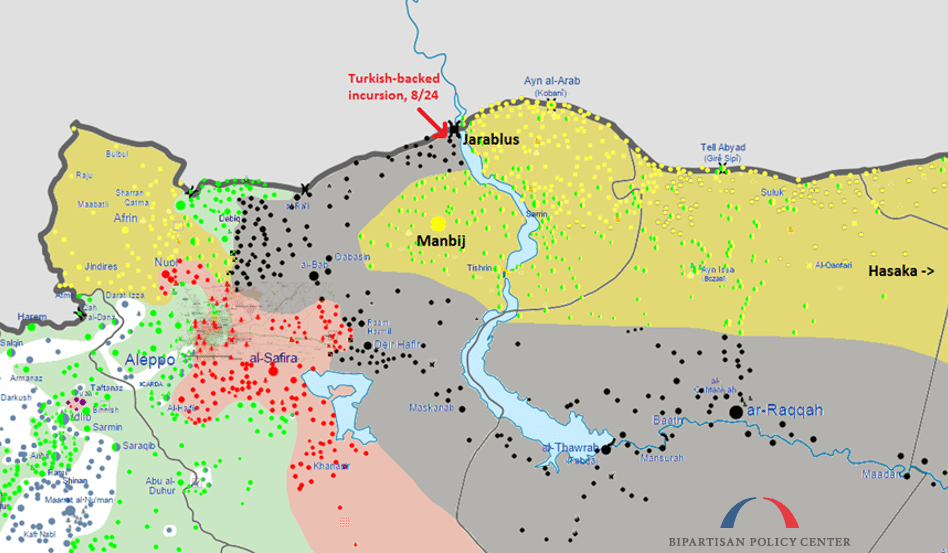 Together, the Manbij and Hasaka offensives might have raised concerns in Ankara that Syrian Kurds’ aspirations were growing increasingly expansionist and coming closer to fruition. By launching Operation Euphrates Shield, Turkey is doing what it should have a long-time ago. It is deepening its cooperation with the United States on Washington’s top regional priority, defeating ISIS, in the hopes that it can accomplish two of its own goals.

First, in the near-term, deny the YPG the ability to link up its territories of Jazira and Kobani in eastern Syria with Afrin in the west. If Turkey, or Turkish supported rebels, can capture Jarablus, it will have effectively driven a wedge between Kurdish territories.

Second, in the long-term, break the United States away from the Kurds. If Ankara can persuade Washington that it is now serious about fighting ISIS and that it can do so effectively, it might be able to reduce U.S. reliance on the YPG.

Will Turkey use fighting ISIS as an excuse to block Kurdish political ambitions?

This strategy already seems to be bearing fruit for Turkey. It was clearly timed to coincide with the visit of Vice President Joe Biden to Ankara and signal to the United States that Turkey was finally willing to help defeat ISIS. The U.S. reaction was immediately positive and beneficial for Turkish interests. Standing next to Turkish Prime Minister Binali Yildrim, Biden made it clear that Washington would not support Syrian Kurdish forces if they continued violating Turkish red lines by moving West of the Euphrates river. Two things, however, remain unclear about Operation Euphrates Shield.

First, whom exactly is Turkey trying to shield the Euphrates from? Is this an anti-ISIS operation or an anti-YPG one? That is, will Turkey now take an active role in fighting ISIS everywhere?In Turkey, in Iraq, in other parts of Syria, perhaps even helping liberate ISIS’s capital of Raqqa? Or will it only use fighting ISIS as an excuse to take actions designed predominantly to block Kurdish political ambitions? The former would open up new and important avenues for U.S.-Turkish cooperation; the latter would suggest Turkey still does not share U.S. strategic interests.

Second, what does this Turkish operation mean for the ultimate fate of Syria? Turkey recently seems to have suggested it is ready to cooperate with Russia to support a transition strategy in Syria that allows Assad to stay in power, at least for now. And it is unlikely that bombing runs into Syria by Turkish F-16s could have occurred without some sort of notification of, if not coordination with, Russian forces.

Thus, while Operation Euphrates Shield is a welcome, though belated, action, the United States should remain clear-eyed about Turkey’s strategic objectives which still might not align completely with its own.

Turkey After the Coup

What Can Biden Bring Turkey?

The U.S-Turkish Alliance Is Fraying at the Edges