Few federal programs warrant as much attention from the public and policymakers as Social Security and Medicare. Each program serves more than 50 million Americans, many of whom depend on the benefits as their primary source of income and health insurance. The importance of these programs is also reflected in their share of the federal budget. Combined, Social Security and Medicare expenditures total $1.5 trillion, comprising 38 percent of all federal spending in 2016. 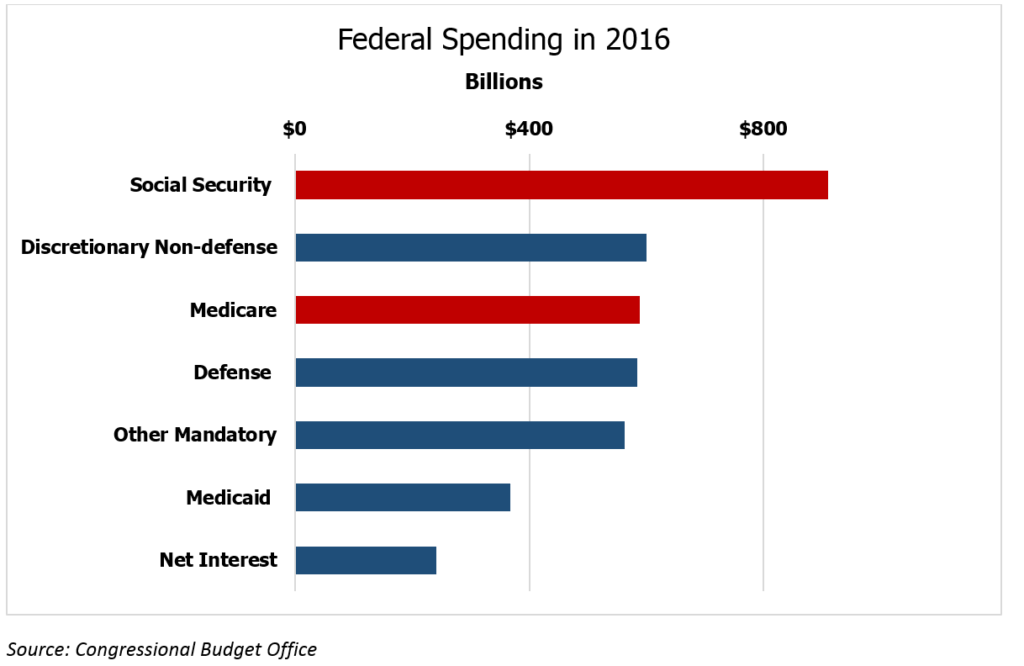 Given the size of these programs and the crucial support that they provide to so many Americans, monitoring and safeguarding their financial status is critical. Separate Boards of Trustees with a common membership have been charged with these responsibilities since the inception of the programs. For the first 44 years, the Board was composed of three members of the administration ? however, public trust in the long-run solvency of the programs began to wane in the late 1970s as their financial challenges mounted. In response, a blue-ribbon group of experts and policymakers in 1983 recommended that two public trustees be added to the existing Board of Trustees for Social Security and Medicare.[i] Legislation was enacted that adopted this recommendation.[ii] The public trustees are required by law to not be of the same political party, providing the opportunity for independent review of the financial status of the Social Security and Medicare trust funds.

Public trustees have thus been an essential part of the oversight management of these programs in almost every year since the first appointments in 1984.[iii]  Unfortunately, for nearly the past two years, these positions have gone unfilled. This lack of oversight is particularly troubling given the precarious financial position of both programs and the long-term fiscal trajectory of the federal government, which is greatly impacted by these entitlements.

Assets in the Social Security and Medicare Hospital Insurance trust funds are projected to steadily decline over the coming years and, absent congressional action, eventually be depleted, which would necessitate cuts to programmatic spending, such as Social Security benefits or payments to health care providers. Restoring the trust funds to fiscal sustainability will require spending cuts, tax increases, or more likely, both. The size of the problem has grown over the years with the aging of the baby boomers and increasing longevity. Politically difficult reforms were enacted in 1983 to successfully close a Social Security funding shortfall, but that gap was much smaller than the one looming today. If policymakers continue to wait to enact reforms, the adjustments needed for both Social Security and Medicare will only become larger and more challenging to address.

So what exactly do the public trustees do?

As members of the Boards of Trustees for Social Security and Medicare, which oversee the finances of both programs, the public trustees share the boards’ key responsibilities, including:

One of the key methods that the trustees use to execute their responsibilities is the publication of annual reports on the status of Social Security and Medicare. For each respective program, the report serves as the primary source of information on financial conditions and future projections.

Why does having public trustees matter?

The data and analysis released in the annual trustees reports serve as the basis for policy discussions in Congress and in the administration relating to changes to Social Security and Medicare. Maintaining the credibility of these reports is essential so that all sides can agree on the size and scope of any financial challenges facing the trust funds when developing possible reforms. The existence of public trustees bolsters that credibility by including independent, public stakeholders in the development of these critical information sources.

Maintaining confidence in the independence of the trustees reports carries broad importance, because their analyses and economic assumptions are used extensively both within and outside the federal government to evaluate Social Security, Medicare, and overall government finances. For example, data from the trustees reports are used in the Treasury’s Financial Report of the U.S. Government, which includes projections of the long-term financial health of the federal government. Additionally, options for improving program solvency, produced by the Social Security Actuary’s Office, and others rely on the trustees’ assumptions.

If public confidence in these programs is to be maintained, there must be trust in their financial information and management, which has been waning in recent years. A 2015 Gallup poll found that 51 percent of non-retirees did not believe the Social Security system would be able to pay them any benefits when they retire. Similar polling has found that trust in the government at large is at historically low levels. Maintaining an independent, bipartisan, and public role in the financial oversight of these critical programs is a necessary step towards restoring public trust in their future.

In recognition of this problem, the Bipartisan Policy Center is undertaking an initiative with the most recent public trustees, Charles P. Blahous III and Robert Reischauer. Through this initiative, they will provide independent and bipartisan financial analysis of the Social Security and Medicare programs while the public trustee positions remain vacant. Their work at BPC will not by any means replace the need for official public trustees to be nominated and confirmed in an expedited fashion, but rather will help to maintain expert public oversight of these programs while the official roles remain unfilled.

[ii] The Board was expanded to include the Commissioner of Social Security when SSA became an independent agency in 1994.

[iii] Since the Boards of Social Security and Medicare were expanded to include public trustees, individuals in those roles have signed 27 out of 32 annual trustees reports.

[iv] Having a fund “in trust” means, generally, to hold or be legally responsible for property you do not own. In this case, the trustees are responsible for the financial management of the trust funds, even though they are publicly owned. Notably, the Social Security and Medicare trustees do not bear fiduciary responsibility.