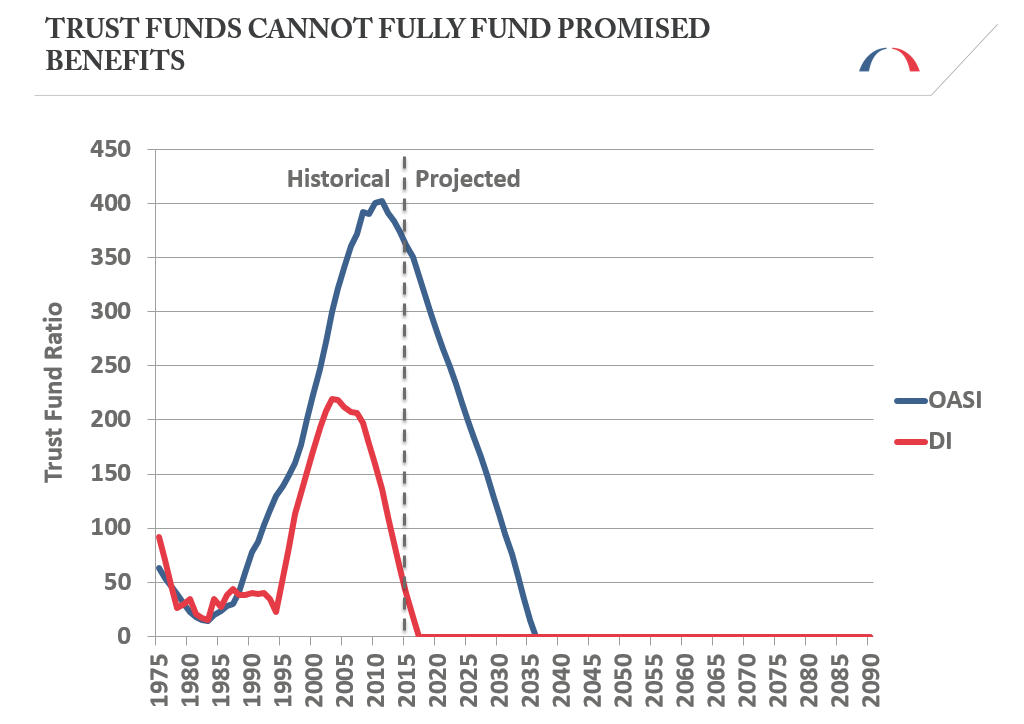 Social Security faces major funding shortfalls in both the short and long term as it approaches its 80th birthday, according to the latest report on the program’s finances by the Social Security and Medicare Trustees. The program’s two public trustees, Bob Reischauer and Chuck Blahous?both members of BPC’s Commission on Retirement Security and Personal Savings?joined Treasury Secretary Jack Lew yesterday to warn of impending financial challenges.

The immediate problem facing policymakers is the impending insolvency of the Disability Insurance (DI) Trust Fund; the trustees project it to be exhausted in late 2016?before the next president takes office. If this Congress and president do not reach a bipartisan agreement to shore up DI’s finances by late next year, the program would only have enough revenue to pay 81 percent of promised benefits to individuals with disabilities, meaning that they would face an automatic 19 percent benefit cut. Policymakers must move responsibly to prevent these cuts to a particularly vulnerable population from taking effect.

The greater challenge, however, is the shortfall facing the Old-Age and Survivors Insurance (OASI) Trust Fund. Reischauer and Blahous write that “the imminent depletion of Social Security’s DI Trust Fund reserves is but the first financing crisis arising from program cost growth trends that have been evident for the past few decades.” They go on to note that “the projected imbalance of the OASI Trust Fund is larger in both absolute and relative terms than that facing the DI fund and arises from many of the same sources.”

While DI is projected to have a shortfall equal to 0.31 percent of taxable payroll over the 75-year window, the deficit facing OASI is nearly eight times larger?2.37 percent, according to the trustees’ projections. They expect the trust fund for that program to be exhausted in 2034, at which point 25 percent of OASI benefits would be unfunded as well. 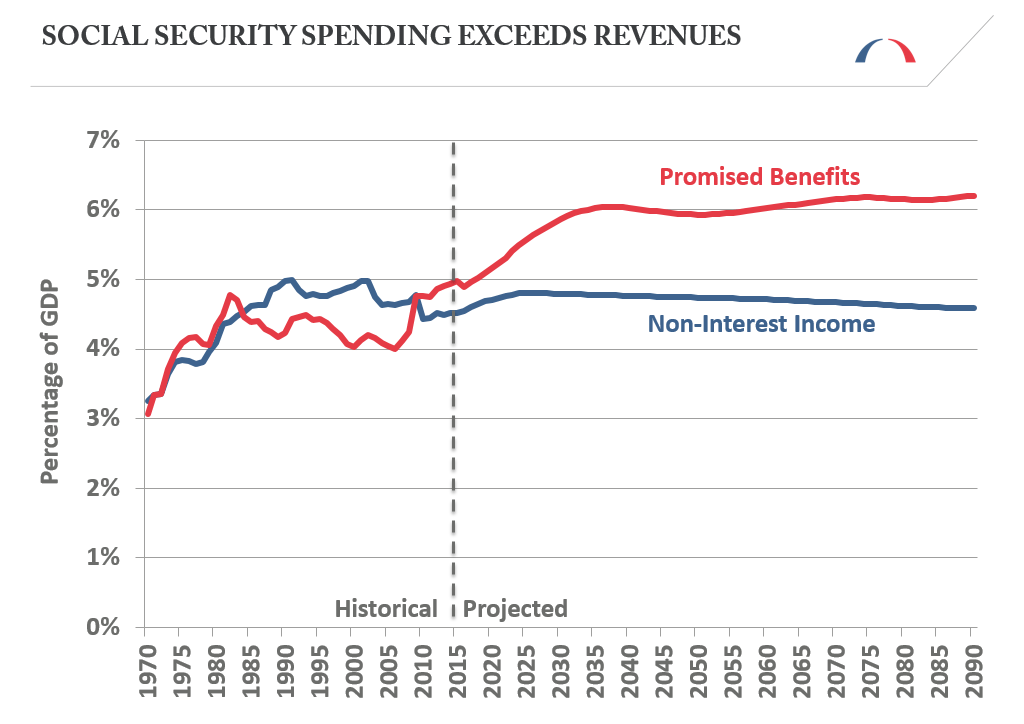 While these numbers are deeply concerning, they are by no means surprising. The trustees have repeatedly warned policymakers and the public that Social Security has substantial financing challenges. Social Security has already (since 2010) been spending more on benefits than it collects in dedicated revenue and is never projected to return to annual balance absent policy changes. Moreover, these deficits are projected to swell as the population of older Americans grows. Clearly, such an imbalance is unsustainable.

Back in the 1960s, four workers paid dedicated Social Security taxes for every beneficiary. Today, that number is less than three?and as Baby Boomers move out of the labor force and into retirement, the ratio of workers to beneficiaries will drop to roughly 2:1 by 2034. That means each worker will have to shoulder more of the burden for tomorrow’s retirees than they do for today’s seniors. And not only are there more retirees: These seniors are also living significantly longer. According to the trustees, average life expectancy at age 65 has risen almost 30 percent since the program was last reformed in 1983, thus increasing the amount of time individuals are drawing benefits.1 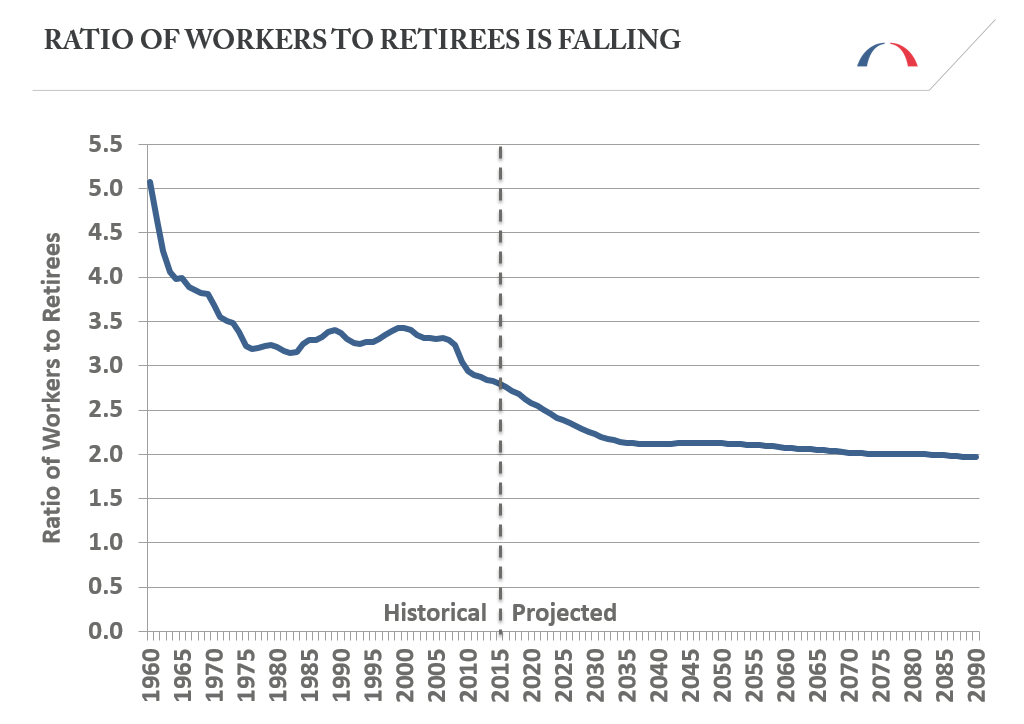 This demographic transition is also contributing to the financial strain on the DI program. Almost three-quarters of DI beneficiaries are above the age of 50, reflecting the wave of baby boomers who are reaching the age bracket when it is most common to enroll in DI. In a way, the impending insolvency of the DI Trust Fund can be seen as a canary in the coal mine for the problems facing the OASI program. Case-in-point: the DI program’s annual deficit is actually falling from its current levels as baby boomers move out of the program and into OASI. 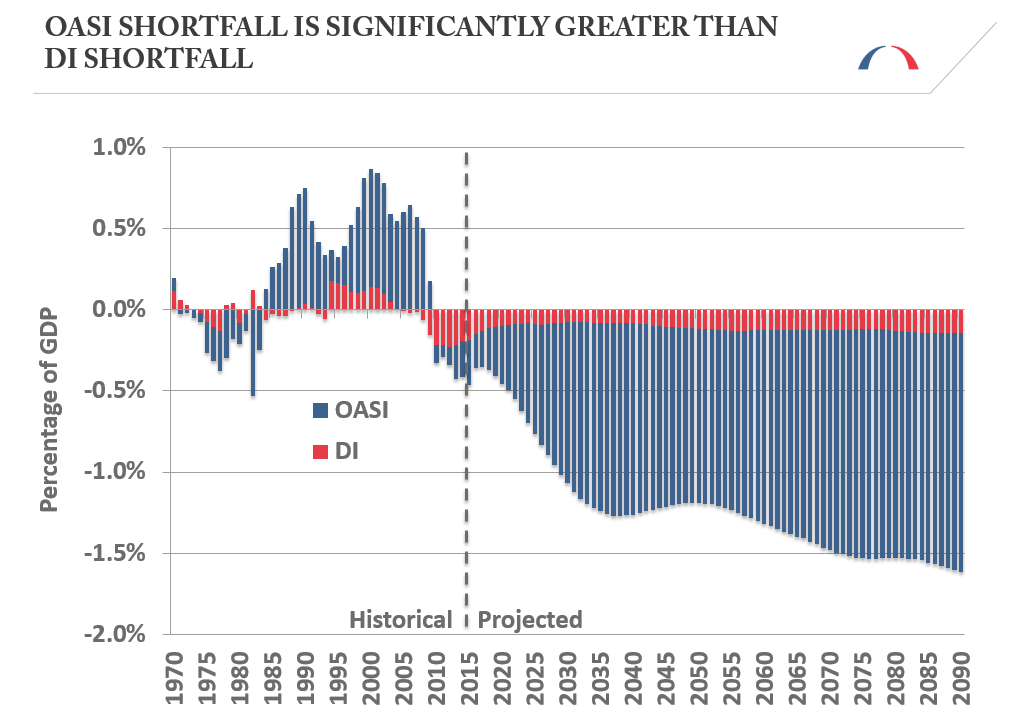 The magnitude of the shortfall facing the combined program, however, is daunting. To demonstrate this, the trustees estimate that making both the retirement and disability portions of Social Security solvent over the 75-year window would require one of the following immediate and permanent actions: either a 2.62 percentage-point increase in payroll taxes (a relative revenue increase of 21 percent), a 16 percent cut in benefits for all beneficiaries, or some combination of the two.

The longer policymakers wait to fix the problem, the worse it becomes. In fact, Reischauer and Blahous warn that waiting until trust fund depletion in 2034 would mean “even the total elimination of Social Security benefits for those newly eligible in 2034 would be insufficient to restore short-term financial balance. Similarly, a payroll tax increase of the magnitude needed to maintain scheduled benefits would have a profound adverse impact on the economy and employment.” Such a delay would “likely preclude any plausible opportunity to maintain Social Security’s historical financing structure” because “there is no historical precedent for closing annual gaps of this size within the space of just a few years.”

For this very reason, policymakers will need to adopt some form of short-term financing fix for the DI Trust Fund. No policy changes to the program could reduce the shortfall sufficiently in the next 18 months to eliminate that need. But such a “patch” should not take place in isolation, as the trustees clearly state in their report: “Any necessary resource reallocation that does occur should not be regarded as a substitute for action to sustain the finances of DI and Social Security as a whole.”

Given that OASI is a much larger program with an even more troubling financial outlook, policymakers should similarly not stand idly by and continue to postpone action while one of America’s most important social safety net programs heads towards insolvency. Instead, our leaders should heed the warning of the program’s trustees and act promptly to solidify the bedrock of retirement security for the seniors of both today and tomorrow.

Jillian Zook and Jordan Berne contributed to this post.

1 One important point to consider for policymaking is that increases in life expectancy have not been equally distributed across the income spectrum.