The bombing in Ankara last weekend is a despicable act of terrorism, made all the more heinous by the fact that it targeted a rally calling for peace amid growing violence and unrest in Turkey. The attack is made even more tragic by the many voices that have warned that the growing presence of terrorist networks within Turkey and spiral of political violence that is engulfing the country, if left unaddressed, could have such horrific consequences.

Rather than retrospection, however, the bombing should prompt U.S. policymakers to seek answers about the attack and question what it might portend for the U.S.-Turkish relationship. 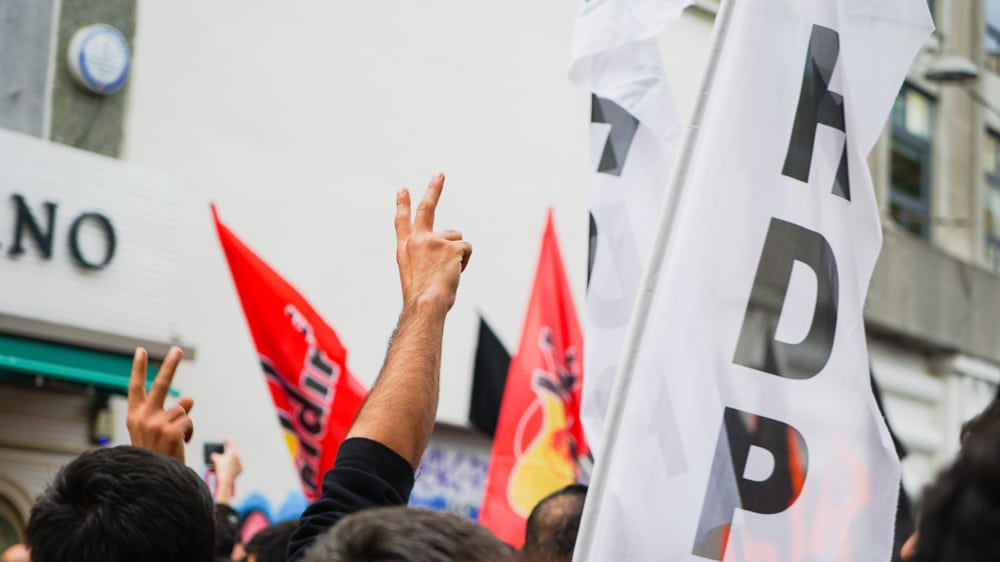 Protesters in Istanbul, Turkey gather for a peace demonstration following the bombing in Ankara (October 10, 2015)

So far after the Ankara attack, no one has claimed responsibility, while Turkish authorities are focused on ISIS. It is in U.S. interests to determine who was responsible, and U.S. policymakers should offer intelligence and investigation assistance to Turkey in pursuit of this goal.

If ISIS is now carrying out attacks not just along the Syrian border near territory it controls, but in the heart of Turkey itself, that means the group has effectively embedded itself in Turkey to a much greater degree than the Turkish government has been willing to admit and will require a concerted and aggressive effort to rout. If some unknown terrorist group is behind the attack, both U.S. and Turkish authorities should be alarmed that they do not have a full understanding of who is operating in Turkey. If it is a known group other than ISIS, the motive can only be determined once that comes to light.

The lack of a clear perpetrator is highly destabilizing to Turkey’s already fraught and polarized society. Without any group claiming responsibility, imaginations are left to run wild and the attack becomes a political tool, with every party in Turkey’s bitterly divided political sphere pinning responsibility on its adversaries. Laying to rest such speculation and the further divisions it fuels is critical to Turkey’s stability ahead of elections in November.

Could it have been prevented?

Turkey has a highly regarded intelligence apparatus, the National Intelligence Organization, and has recently shown great success at identifying terrorist groups acting inside its borders.

The United States and other allies have repeatedly warned Turkey of the need to be more vigilant of ISIS and other Sunni extremist groups within its territory. Concern over the use of Turkey as a recruitment, training, staging, and transit hub by foreign fighters seeking to join ISIS or al Nusra or other groups in Syria has been a common refrain in conversations U.S. and European officials have had with their Turkish counterparts, especially in the last year. Increased U.S.-EU-Turkish intelligence sharing has been implemented to try and stem this flow of jihadists and Turkey has stated it is stepping up efforts to keep terrorists out of the country.

With such an impressive track record of spotting and catching domestic terrorist organizations, international intelligence sharing on foreign threats, as well as a stated commitment to countering the ISIS threat, it is concerning that Turkey’s security apparatus was not able to prevent this attack. The U.S. intelligence community should work with its Turkish counterparts to identify whether any intelligence failures occurred. It is important that, as a critical U.S. ally in the fight against terrorism and recipient of U.S. intelligence, Turkey’s national security and intelligence organizations are functional and trustworthy.

How will Turkey respond?

Given previous unexpected Turkish reactions to terrorist attacks, such as undertaking airstrikes against the Kurdistan Workers’ Party (PKK) just days after a suspected ISIS bombing, U.S. officials should seek to fully understand their Turkish counterparts’ plans following this latest attack and proactively discourage any actions that might exploit this tragedy. Catching those responsible and preventing them from carrying out future attacks should not be the only objective for either the United States or Turkey. Putting an end to the vicious cycle of distrust, accusations, and violence that is threatening to rip Turkey’s society apart should be the paramount concern.

Thus, U.S. policymakers should avoid redefining, or allowing Turkey to redefine, the U.S.-Turkish relationship as entirely focused on counterterrorism in the wake of this attack. Instead, they should work to ensure that the Turkish response is limited to legitimate counterterrorist targets and be willing to publicly object if Turkey uses the objective of preventing terrorism to pursue unrelated political goals?such as the recent arrest of Bülent Kene?, the editor of a prominent newspaper that has been critical of the government and President Recep Tayyip Erdo?an in particular.

Without peace or free media, can November elections in #Turkey be free and fair? http://t.co/TIrJQQzkF2

What will the impact be on Turkey’s elections?

The upcoming November election will hinge upon the performance of the pro-Kurdish Peoples’ Democratic Party (HDP). In June, it garnered 13 percent of the vote, exceeding Turkey’s 10 percent electoral threshold for the first time and earning 80 seats in parliament. The HDP’s strong performance contributed heavily to the Justice and Development Party (AKP) losing its ruling majority. The simplest way for AKP to regain power in November would be for the HDP’s share of the vote to fall back below the 10 percent threshold. And the most obvious way to achieve that would be to suppress turnout in Turkey’s predominantly Kurdish southeast. With widespread violence in this region of the country, it is not difficult to imagine this happening.

With ongoing clashes between the PKK and Turkish forces as well as the Ankara bombing, Kurds might already be wary of large public gatherings. Indeed, a number of Turkey’s largest political parties suspended all electoral rallies following the most recent attack. Attempts by the government to instill peace by, as it has in some places, boosting the presence of security forces and imposing curfews could actually be seen as an attempt to intimidate Kurds and spark even greater clashes. On the other hand, there is also worry that the PKK might be able to coerce voters in the Southeast’s rural communities where?with only a handful of voters for any given voting place?ballots are less than anonymous. The government’s proposed solution, to bus villagers to vote in larger towns, is equally problematic.

With so much at stake, U.S. policymakers should not only remind their Turkish partners of the importance of free and fair elections but also work with them and European counterparts to devise a strategy, such as robust international election monitoring, to help ensure Turks can cast their ballots without fear of tampering or violence.