Spanning four countries?Turkey, Syria, Iraq, and Iran?and comprising over 28 million people, the Kurdish community is complex and fragmented but plays a critical role in the strategic calculus of the region’s ongoing conflict. Kurdish forces have proven to be instrumental in combating ISIS, especially where Syrian rebel factions and U.S. trained militias have fallen short. Recently, however, the Turkish government began military operations against a Turkish Kurdish group that it considers a terrorist organization, which some observers warn could impact the willingness of Syrian Kurds to continue fighting ISIS. To follow these dynamics requires understanding the relationship between various Kurdish groups as well as the conflicting relationships between these groups and NATO allies Turkey and the United States.

This piece aims to break down the organizational, ideological, and operational linkages between five key Kurdish organizations operating in Syria and Turkey. While sharing a Marxist ideology and pro-Kurdish goals, the various organizations diverge in terms of how to achieve these goals, ranging from using violence to participating in the political system. Many other offshoots, splinter groups, and advocates also exist to promote Kurdish interests, but will be detailed in a separate post. Understanding the nexus between the five groups and their role in fighting ISIS helps to shed light on regional dynamics as well as the complicated American-Turkish-Kurdish triangle.

Inspired by Vladimir Lenin’s anti-imperialist writings, Marxist-liberationist theories have driven these organizations to adopt egalitarian, communal, and often radical policies in pursuing the creation of a Kurdish state. 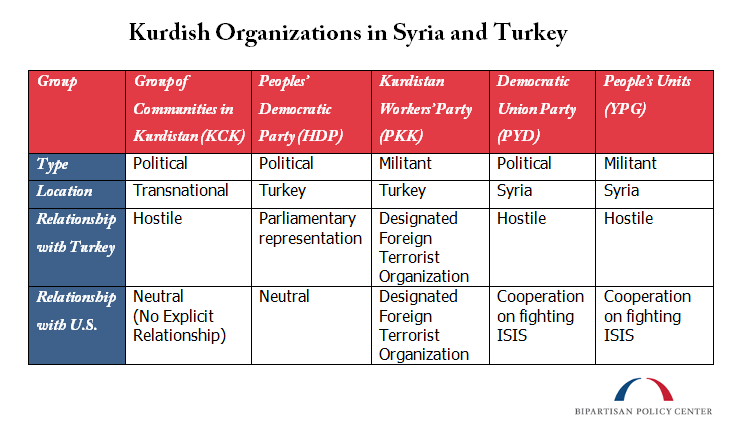 This overarching ideology manifested into two distinct organizations in Turkey and Syria with different bases of support: The HDP, a pro-Kurdish political party in Turkey, and the KCK, which functions as an umbrella organization for political and militant Kurdish groups throughout the region. While there are speculative links between the two organizations, the HDP and KCK theoretically operate independently of each other.

The KCK also encompasses the three other Kurdish organizations mentioned above: the PKK in Turkey, and the PYD and YPG in Syria. 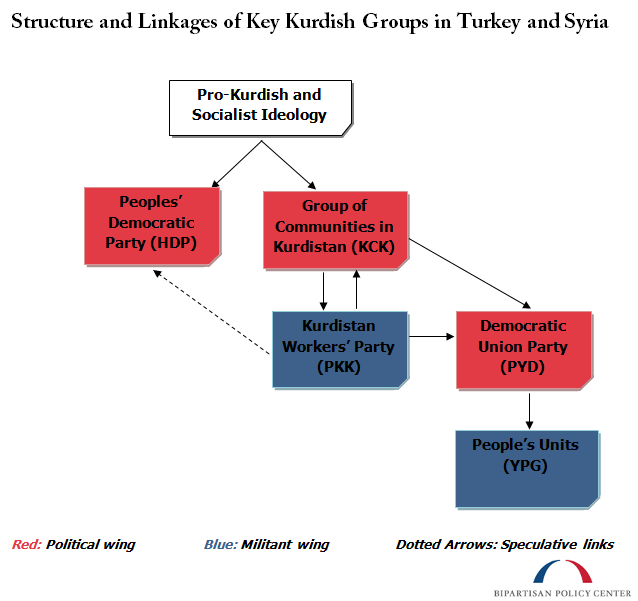 The HDP: The Peoples’ Democratic Party (HDP) was founded in 2012 and rose to prominence in 2014 after merging with the Kurdish Democratic Regions Party. In 2015, the HDP surpassed the 10 percent barrier to parliamentary representation in the June 2015 general election on a liberal platform that supported a continued Kurdish peace process, and advocated for women’s and minority rights. The HDP, in order to become a legitimate political player in Turkish politics, advocates moderate policies and compromise within a legal framework. The party has been committed to using negotiation, representation, and diplomacy to achieve its goals.

The KCK: Founded in 2005 by PKK leader Abdullah Öcalan, the KCK is thought to be heavily controlled by the PKK and often swayed by the group’s interests. Directed by an elected executive council, the KCK functions ostensibly as an umbrella organization of Kurdish groups and is responsible for overseeing both political and militant Kurdish factions throughout the Middle East. Though technically a political organization, the KCK has been alleged to engage in nefarious tactics akin to the PKK.

The PKK: The Kurdistan Workers’ Party (PKK) was founded as a Marxist-nationalist movement by leader Abdullah Öcalan in 1978. After launching a bloody conflict with the Turkish government in 1984, which killed more than 40,000 people, the PKK was labeled a terrorist organization by Turkey, the United States, the European Union, and NATO. Turkish Prime Minister Recep Tayyip Erdo?an announced a ceasefire with the group in 2013 and opened a peace process aimed at getting the PKK to lay down its arms and bring the conflict to a close. This progress, coupled with the group’s role in defending the Syrian border city of Kobani from ISIS, markedly raised the PKK’s international standing, with some observers beginning to question whether it should be taken off the terrorist list.

But the once-promising ceasefire was broken in July, prompting Turkey to conduct airstrikes against PKK targets and round up PKK suspects. The PKK, in turn, has resumed attacks on Turkish military and police units. The PKK asserted that it had no choice but to return to violent struggle, claiming, “[the] Turkish government with its arbitrary actions has already resumed the war against the Kurdish people.”

The PYD: In 2003, the Democratic Union Party (PYD) was formed as the political offshoot of the PKK in Syria. In 2012, following the Arab Spring and uprising against the Bashar al-Assad regime, the PYD established an early, unarmed military defense program for Kurdish regions in Syria. The party advocates for pluralistic democracy and Kurdish autonomy in Syria rather than separatism. Despite the group’s known connection to the PKK, the United States does not consider it to be a terrorist organization and cooperates with the PYD on fighting ISIS.

The YPG: The People’s Units (YPG) is an armed Kurdish militia in Syria operating as the PYD’s militant offshoot. It functions as a people’s army whereby leadership decisions are based on direct democratic votes and the security concerns of local populations are top priority. Like the PYD, the militia group is committed to uniting the historically Kurdish regions of Syria under an autonomous or semi-autonomous state. Recently, the YPG has garnered increasing importance due to its instrumental role in protecting Kurdish areas from opposing forces in Syria. The YPG is not considered a terrorist organization by the United States and helps to combat ISIS on the ground.

The KCK and PKK: Though the KCK maintains that its role is to act as a parent organization for all relevant Kurdish interest groups, it has publicly aligned itself with the most radical contingent, the PKK, from which it was founded. The 2013 ceasefire was brokered and extended by mutual agreement of the KCK and PKK but, with the collapse of the peace process in July, the KCK has begun to support more violent and separatist positions in Turkey.

While KCK Councilman Zübeyir Aydar stated on August 6 that, “We desire that both sides return to the negotiation table,” the official message of the organization has since eliminated any hopes for a return to peaceful talks. On August 10, the KCK issued a statement proclaiming that the only acceptable solution to the current conflict would be an independent Kurdish state. On the heels of recent attacks on Turkish military units by PKK insurgents, this statement places the KCK in line with its most extreme member, ignoring HDP calls to seek peace before a larger scale conflict erupts.

The PKK and HDP: Though Demirta? denies links to the PKK, the groups’ connections, shared ideological roots, and strong Kurdish support have led some to speculate that the PKK influences the HDP’s positions and actions. Recently, Erdo?an accused the HDP of being nothing more than “the PKK’s extension in Parliament.” Though the HDP claims to be independent, and has publicly called the PKK’s tactics “dirty,” it is unclear to what extent the KCK and PKK influence the party.

The PKK and Syrian Kurds: While the YPG has been largely credited for Kurdish success against ISIS, loose distinctions between the military and political arms of the KCK indicate PKK involvement in the conflict as well. Following conditions laid out by the 2013 ceasefire in Turkey, PKK fighters moved across the border to Iraq so as not to hamper political dialogue by the threat of violence. With many PKK fighters located within Iraqi’s Kurdish region, it became easy for them to slip into Syria and fight alongside the U.S.-backed YPG, especially after ISIS threatened the Kurdish city of Kobani in 2014.

Military linkages between the YPG and PKK could be quite significant in terms of defeating ISIS. Since the ceasefire with Turkey went defunct, however, Turkish bombings of PKK bases have resulted in hundreds of casualties, diminishing the group’s power and military capabilities.

Although Turkey and the United States are longstanding partners and NATO allies, they have continued to butt heads over the Kurdish issue, particularly when it comes to fighting ISIS. Due in part to the complex and interconnected nature of Kurdish groups in Turkey and Syria, the United States has committed itself to a somewhat inconsistent policy of support. While Erdo?an has explicitly linked the PYD to the PKK, the United States has stressed that they are legally different groups and therefore does not classify the PYD, and subsequently the YPG, as a terrorist organization. Turkey’s prior reluctance to allow the United States to use its airbases to strike ISIS was likely a result of the United States’ willingness to back the PYD and YPG on the ground.

The delicate balance between Turkey and the United States over the Kurdish issue, however, has limited the scope of the anti-ISIS coalition. The United States does not share tactical information with the YPG, officially a non-state actor, to coordinate attacks. Instead, Kurdish forces must resort to using Google Maps and other innovative techniques. Turkey, on the other hand, has ruled out sharing intelligence with PYD fighters altogether.

With the American-backed YPG making real progress in the war against ISIS, heightened Turkish antagonism toward PKK-affiliated groups has strained Turkish-American relations as each country prioritizes its national security concerns over the other’s. While Turkey views these Kurdish movements as threats to its sovereignty, the United States has strategically opted to pick and choose which groups are useful in combating ISIS on the ground.

The nexus between Turkish and Syrian Kurdish groups mean that the fate of the Kurds in each of those two countries is inextricably linked. And, with the relationships that the United States has with Turkey and simultaneously fostering with Syrian Kurds, it has now become embroiled in the broader Turkish-Kurdish struggle. Nothing demonstrates this more clearly than the frequency with which attempts are made to draw it into fray. In recent weeks, reports have surfaced claiming U.S. officials were talking with the PKK directly, though the United States has since denied them.

What is undeniable, however, is that, as hopes for a Kurdish peace process grow faint, American interests could be undermined by an escalation of the Turkish-Kurdish rivalry. Turkey’s ongoing campaign against the PKK could halt and even reverse the progress Kurds have made in recent months. Further, by allying with Turkey in the creation of a buffer zone, the United States may have inadvertently begun to lose the support of PKK and YPG fighters. KCK Co-Chair Cemil Bayik highlights the American conundrum well, stating, “If America continues to back Turkey’s policies, it is possible it will lose the Kurds. If America loses the Kurds, it will be difficult to defeat ISIL.”

In the Fight Against ISIS, Who Are Jaish al-Fatah?