For more than two months after the June 7 election, Turkey remained in a sort of political deadlock. The Justice and Development Party (AKP) of President Recep Tayyip Erdo?an might have lost its outright majority in parliament, but it was still the largest party and charged with trying to form a coalition government. Each of the three other parties in parliament, however, campaigned explicitly against the AKP’s central objective: changing the constitution to create a strong presidential, rather than parliamentary, system. Against this backdrop, it is unsurprising that the coalition formation process was unusually drawn out and failed to yield any workable government.

Now that the August 23 deadline to form a coalition has passed, Turkey has no choice but to head to the polls again. Will another round of voting lead to a significantly different result? Is there any path back to power for Erdo?an and the AKP? Although exit polls after the June 2015 vote suggest that voters would stick by their original choices in an early election, a closer examination of the vote outcome suggests there is a path back to power for Erdo?an and the AKP?a potentially dangerous path but one that they seem to have discovered and are fully committed to following. 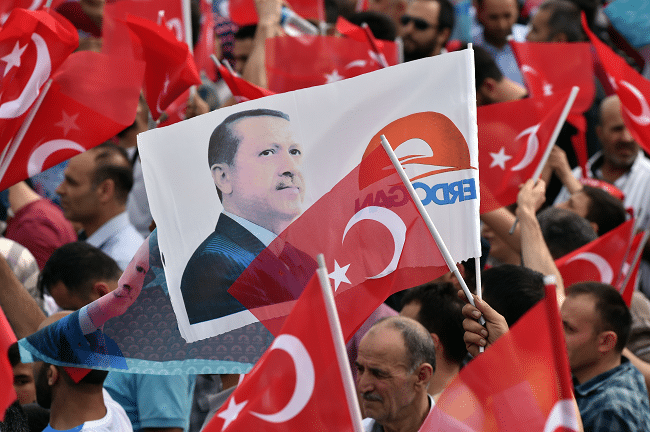 Constituency breakdown suggests the AKP can win back votes and a path back to power:

What has transpired since the election suggests that Erdo?an, determined to maintain power, is adopting precisely this strategy, gambling that a divisive, crisis-driven nationalist strategy will win back enough votes from the MHP in the snap election:

Our analysis of voting patterns in Turkey’s 2015 general election, coupled with recent polling, suggests that this strategy could very well prove successful: the AKP appears poised to regain its parliamentary majority, albeit by a very small margin.