First in a series

Last month, the Bipartisan Policy Center (BPC) introduced a report calling for a comprehensive approach to system-wide health care improvement and cost containment. As policymakers consider changes to federal health programs and the tax code, versions of many of the proposals included in our report have entered the national discussion. In this series of posts, we’ll provide a deeper dive into some of our proposals, along with comparisons to similar offerings, and, very importantly, how they fit into broader efforts at reform.

Today, the Congressional Budget Office released its own estimates of the president’s proposals in his fiscal year 2014 budget, including several health-related measures. One such proposal would reduce subsidies to higher-income Medicare beneficiaries by expanding an existing approach known as income-related premiums, and is projected to save $56.3 billion over the next ten years. Similar proposals have been made by both Republicans and Democrats in Congress, and BPC included such a proposal as part of a comprehensive, integrated approach to improving Medicare.

Since the launch of Medicare in 1966, Part B coverage of physician services has been financed by a combination of beneficiary premiums and general tax revenue, originally a 50/50 split. Today, almost 95 percent of seniors and people with disabilities who are enrolled in Part B pay a premium equal to 25 percent of the program’s cost ($104.90 per month in 2013, which is usually deducted from Social Security benefits). Higher-income beneficiaries, the other 5 percent, pay greater Part B premiums commensurate to their incomes, stemming from a provision in the 2003 legislation creating the Part D Prescription Drug Benefit. The Affordable Care Act (ACA) additionally applied the income-related premium system to the prescription drug benefit as of 2011.

Currently, Medicare beneficiaries with incomes starting at $85,000 (or $170,000 for couples) pay higher Part B and D premiums, which start at 35 percent of program costs and peak at 80 percent of program costs for beneficiaries with incomes over $214,000 (or $428,000 for joint filers). As of now, these higher premiums affect only 1 in 20 Medicare recipients. While the thresholds for higher premiums were originally adjusted annually for inflation, a provision in the ACA froze the income thresholds through 2019, at which point almost 10 percent of beneficiaries are projected to pay income-related premiums. Starting in 2020, however, the thresholds are scheduled to bounce back upward as if they had never been frozen, thereby reducing the proportion of beneficiaries who would be subject to higher premiums. 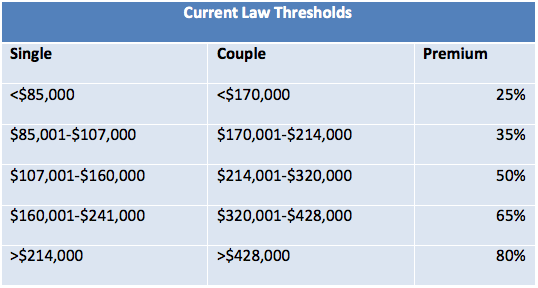 Importantly, because Parts B and D of Medicare are not pre-funded like Part A or Social Security, the federal government contribution through general tax revenue amounts to a subsidy for medical and prescription drug coverage. We believe that a generous government contribution is appropriate for low- and middle-income seniors and people with disabilities, but providing generous subsidies to high-income beneficiaries who do not need the assistance is unjustified given the perilous fiscal trajectory of the nation. 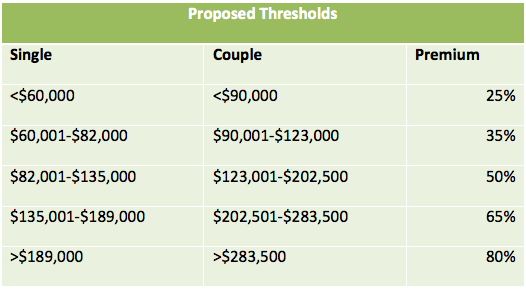 The Obama administration’s recently released fiscal year (FY) 2014 budget proposal, includes changes to income-related premiums for Parts B and D of Medicare beginning in 2017. The proposal would freeze the current thresholds until 25 percent of beneficiaries are subject to income-related premiums (which would take many years to reach if historical wage growth rates continue). Afterward, the income thresholds would revert to being adjusted for inflation. Additionally, the lowest income-related premium for Parts B and D would be increased by five percentage points, from 35 percent to 40 percent of program costs, and those in the highest bracket would pay 90 percent of program costs. The Fiscal Year 2014 House-passed Budget Resolution recommends similar changes in income related premiums.

Given the increasing national debt, we recommend comprehensive delivery system reform to improve quality and value in our health care system. A part of that solution should include reducing taxpayer subsidies to those with higher incomes who don’t need them. All three proposals discussed move toward this goal, and should receive careful consideration as lawmakers work to enact sensible reforms to reduce health care costs and keep deficits under control. Adjustments to income-related premiums fit well with a package of more comprehensive reforms, such as improvements to the Medicare benefit design, reforms of supplemental coverage, greater assistance to low-income beneficiaries, and more fundamental reforms to transition to payment systems that reward quality and value, and not just volume. 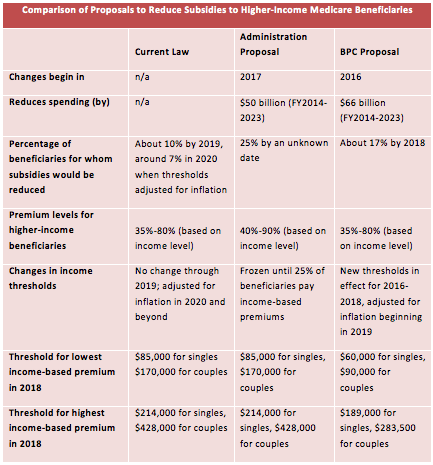