The Bipartisan Policy Center (BPC) recently released A Bipartisan Rx for Patient-Centered Care and System-Wide Cost Containment, an effort led by former Senators Tom Daschle, Bill Frist, Pete Domenici, and former OMB and CBO Director Dr. Alice Rivlin, that calls for a comprehensive approach to system-wide health care improvement and cost containment. As policymakers consider changes to federal health programs and the tax code, versions of many of the proposals included in our report have entered the national discussion. In a series of posts, we will provide a deeper dive into some of our proposals, along with comparisons to similar proposals, and very importantly, how they fit into broader efforts for reform. Read the first, second, third, and fourth entries in the series.

Despite opposition from suppliers of durable medical equipment (DME) and some members of Congress, the competitive bidding program to set DME payments for Medicare beneficiaries officially expanded to 91 regions nationwide on Monday.

Opposition has continually been fierce, and in mid-June, 227 members of Congress signed a letter to Centers for Medicare and Medicaid Services (CMS) Administrator Marilyn Tavenner calling for a six-month delay in the expansion of the program. The letter focused on concerns about the bidding process, including that some bidders were not licensed providers in their states. Moreover, throughout implementation of the program, DME suppliers and some elected officials have raised concerns about how competitive bidding might affect beneficiary access to equipment and competition in the market.

However, the non-partisan Government Accountability Office (GAO) closely reviewed the initial implementation of competitive bidding in nine markets (“Round 1”) and found no evidence of diminished beneficiary access to DME supplies or health outcomes. CMS also released documents aimed at dispelling some of the myths propounded in the representatives’ letter. The documents outline operational safeguards that were put in place to prevent supplier malpractice, such as ensuring: supplier accreditation, suppliers’ ability to immediately operate at their reported capacity, strict financial standards for the suppliers, and authenticity of bids.

For the past two decades, Medicare payments for Durable Medical Equipment, Prosthetics, Orthotics, and Supplies (DMEPOS) have been based on historical charges from the 1980s, adjusted for inflation. Since that time, however, the market price for these items paid by private insurers has fallen substantially. Investigations from GAO and the Office of the Inspector General have found that, in some cases, Medicare pays multiple times what private insurers pay. Worse, under Medicare’s cost-sharing formula, beneficiaries generally must cover 20 percent of the price of equipment, meaning that seniors and people with disabilities ? as well as taxpayers ? are overpaying for DME and related supplies.

Competitive bidding has generated substantial savings (more than $400 million) for taxpayers and beneficiaries in its first two years of operation, and its expansion to 91 metropolitan areas is expected to save tens of billions of dollars for taxpayers and Medicare beneficiaries over the next decade. These savings, in turn, represent lower revenues to DME suppliers. Therefore, like the many efforts to derail competitive bidding before, much of the current impetus for delay stems from the fact that DME suppliers stand to lose some of the excess profits they have been earning for the last few decades. When Congress enacted the laws that required the transition to competitively-bid Medicare prices for DME, legislators must have anticipated this opposition, as they exempted the program from judicial review, which makes it impossible for suppliers to stop the program via the courts. The rest of this post will explain how DME competitive bidding works and why it is a model for future Medicare payment reforms.

The Competitive Bidding Program (CBP) originated in the 2003 law that also created the Medicare prescription drug benefit. The program’s purpose was to determine market-based pricing schedules and to supply contracts for Medicare’s DMEPOS categories. CBP’s implementation, however, was delayed by subsequent legislation. Despite the opposition of DME suppliers and the ensuing political hurdles described earlier, competitive bidding for Medicare-purchased equipment finally went live in nine initial regions on January 1, 2011.

CMS sets price schedules and awards contracts in each Competitive Bidding Area (CBA), which comprises either an entire metropolitan area or a portion of one, using a “pivotal bid” process. This process ranks the numerous bids received from suppliers by price (from lowest to highest) and then moves down the list until projected supplier capacity meets or exceeds estimated beneficiary demand, indicating the pivotal bid. All suppliers that submitted bids priced below this pivotal bid are awarded contracts for a particular item, subject to the requirement that no supplier control greater than 20 percent of the market, and the price paid by Medicare is set to the median accepted bid. This process has maintained a diversity of suppliers for beneficiaries, and CMS has authority to fine tune the auction process to promote low prices and adequate competition for the long-term.

Medicare saved $202.1 million in the CBP’s first year of operation, representing a 42-percent decrease in costs within the targeted CBAs, and approximately another $200 million in its second year. While there were some increased costs to CMS to implement the program ($20 million) and to suppliers to prepare bids and comply with regulations (approximately $2,300 per supplier), these costs were dwarfed by the savings to Medicare and its beneficiaries. Importantly, CMS reported and GAO confirmed that the program did not diminish beneficiary access to equipment or health outcomes, and continued to allow a substantial role for small suppliers, which were awarded 51 percent of contracts. These findings should help alleviate some of the concerns surrounding the program’s implementation. 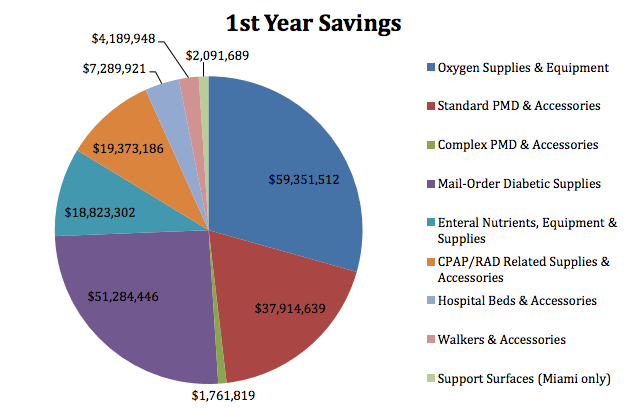 Round 2 of the CBP, implemented on Monday, July 1, expands the program to 91 markets. The program is limited to items identified by CMS as the top 80 percent highest-cost and highest-utilization items and services within the DMEPOS category, which are very similar to those included in Round 1*. In addition, the new round includes a national mail-order competition ? which encompasses all U.S. states and territories ? for diabetic testing supplies contracts. Savings for test strips have been some of the most dramatic, with prices dropping by an average of 72 percent. For example, average Medicare payments for lancets and test strips for diabetics will drop from $77.90 per month to $22.47 beginning on July 1. Beneficiaries, who must pay cost-sharing for these items, will see their costs drop from $15.58 to $4.49 per month, on average.

The CMS Office of the Chief Actuary estimates that the expanded competitive bidding program will reduce spending by nearly $43 billion over the next ten years, saving the Medicare program and taxpayers $25.8 billion and beneficiaries an additional $17.2 billion. As outlined in BPC’s report, A Bipartisan Rx for Patient-Centered Care and System-Wide Cost Containment, this and further expansions are important steps toward improving efficiency and decreasing costs in the medical equipment supply market. 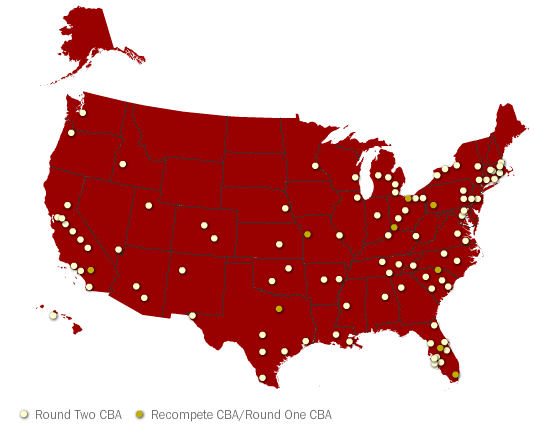 Objections to the Program

While various groups and several members of Congress have voiced concerns about the program, learning from the challenges and successes of Round 1 can ensure an optimal result. Much of the initial trepidation about the program’s expansion came from several medical supplier groups whose profits would decrease and could face difficult, but necessary, decisions to improve their business efficiency. They argued that the system was anti-competitive, reduced access to and quality of care, and would cause employees to be laid off or companies to close.

However, CBP encourages increased competition by accepting bids from companies that had previously not competed in specific regions or product areas and by subjecting bids to heavy scrutiny to ensure that low bids are sustainable. Moreover, neither CMS nor GAO found negative effects on beneficiary access or health outcomes. CMS maintained a hotline for any CBP-related inquiries, and out of over 127,000 total inquiries, there were only 151 complaints.

Although the increased competition encouraged by the bidding system will put pressure on medical suppliers, the DMEPOS market has historically been inefficient with highly inflated prices and a substantial amount of unnecessary or fraudulent equipment utilization. As prices are reduced through the competitive bidding process and begin to approach the market value for medical equipment and supplies, firms will inevitably need to improve efficiency by cutting costs.

When the program first began in 2011, CMS made several efforts to ensure a smooth implementation that did not adversely impact beneficiaries. These efforts included public outreach campaigns to educate both suppliers and beneficiaries about the changes, a patient-satisfaction survey to detect access problems, examination of DME-related calls to 1-800-MEDICARE to find any problems with the implementation, and monitoring Medicare claims data to ensure that patient outcomes were not affected. This comprehensive outreach and surveillance approach ensured that the substantial savings from competitive bidding did not come at the expense of beneficiary access or quality outcomes, as confirmed by GAO, and provides a template for the implementation of future payment reforms.

Payment bundles, which will be discussed in a future post, are a promising approach to encourage separate parties, such as hospitals, physicians, and post-acute care providers, to work together to coordinate care, improve quality outcomes, and reduce costs. Because such reforms affect the delivery system, careful and proactive monitoring from CMS, as it has done for the DME Competitive Bidding Program, will be necessary for successful implementation.

* As the Competitive Bidding Program expands to cover more of the country, Medicare will become more sustainable and more beneficiaries will benefit from reduced costs. The efforts underway are a good first step toward modernizing Medicare’s price schedule, and should be expanded aggressively in the years ahead. *Round 2 items and services fall under the following categories: oxygen supplies and equipment, standard (power and manual) wheelchairs and scooters, enteral nutrients and equipment, CPAP and respiratory assist devices, hospital beds, walkers, support surfaces, and negative pressure wound therapy pumps. These categories include all related supplies and accessories. The only changes from Round 1 are the addition of the negative pressure wound therapy, removal of the complex power wheelchair, and the expansion of the support surfaces (previously only covered in Miami) categories.