The news that at least 10 people died in a suicide bombing carried out, allegedly by the Islamic State (ISIS), in the center of Istanbul’s tourist area is tragic but unfortunately not surprising. Over the last six months, ISIS has conducted three deadly attacks in Turkey which the ruling Justice and Development Party (AKP) appeared to shrug off as not directed against Turkey itself. At the same time, the Turkish government began to take a tougher stance on ISIS?including claiming to have disrupted a New Year’s plot targeting Istanbul?increasing the likelihood that the group would try to strike again. The central question facing the AKP, therefore, is whether it will choose to see this latest bombing as an attack against Turkey itself or just one that happened to take place in Turkey?

Turkey has witnessed horrific attacks by ISIS in recent months: Over the summer, at least 30 people died in an attack on a community center in the town of Suruc, where young Kurdish volunteers were preparing to go on a humanitarian mission to Syria. In October, a dual suicide bombing at a left-wing, predominantly Kurdish rally in Ankara left over 100 people dead. But as a result of Turkey’s intense polarization and the resumption this summer of hostilities between President Recep Tayyip Erdo?an’s forces and the Kurdistan Workers’ Party (PKK), the AKP government viewed these bombings not as attacks on the Turkish nation but on its domestic enemies.

Evidence quickly emerged that the individuals responsible for the Ankara bombing were already under police surveillance because of their involvement in previous ISIS bombings, suggesting that if nothing else the government had been grossly negligent or even tacitly accepted ISIS attacks against Kurdish targets. Indeed, AKP leaders confirmed this impression when they suggested that the Ankara bombing may have been the work of Kurdish terrorists, or perhaps a “terror cocktail” in which the PKK and ISIS were jointly responsible. While ISIS may have simply struck Kurdish groups in Turkey as an extension of its fight with the Kurds in Syria, the group may also have anticipated this reaction from the Turkish government, and realized that such targeted attacks could exacerbate Turkey’s existing fault lines and push the country closer to civil war. 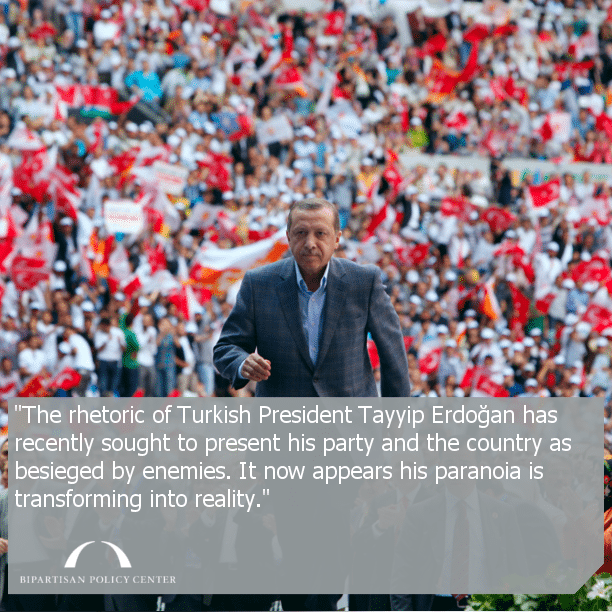 The latest attack in Istanbul, though, appears to deliberately target Turkey and Turkish interests in a way that will be much harder for the government to ignore. Turkey’s tourist sector has already been affected by domestic and regional violence, but a bombing in the heart of Sultanahmet?the historic heart of the imperial city and its main tourist destination?will take an even more dramatic economic toll in lost tourist revenues. Erdo?an initially claimed the bomber was a Syrian woman, while Istanbul police are now blaming a young Saudi man, but in either case the AKP government has been consistent in assigning responsibility to ISIS. In what has almost become an instinctive reaction, the government imposed a ban on press coverage of the attack. The government is unlikely to welcome, or even allow, a serious conversation about how its lax investigations of previous attacks contributed to this bombing, or what the Bipartisan Policy Center previously warned was the Erdo?an regime’s “misguided belief that if Turkey left ISIS alone, ISIS would leave Turkey alone.”

On the one hand, the government might, yet again, brush off this bombing. Given that the victims of the attack in Sultanahmet appear to be foreign?primarily German?tourists, it could be explained away as ISIS targeting Europeans, not Turkey, and lashing out at European countries that have recently stepped up their own efforts against the group.

But the government’s initial comments, at least, suggest that the latest attack in Istanbul will not be as easily brushed aside and that the AKP government will not be able to completely avoid treating this as an attack on Turkey.

When the AKP initially declared it was engaged in a two-front war with the PKK and ISIS, its focus was clearly on the former. Now both fronts are becoming even more deadly. Turkey is embroiled in a new conflict with Russia and has strained relations with the Iranian and Iraqi governments. In order to maintain its hold on power, AKP rhetoric has recently sought to present the party and the country as besieged by enemies. It now appears its paranoia is transforming into reality.

However, even if the AKP accepts the reality that ISIS operates freely within its borders and that this poses a serious threat to its own citizens and interests, it is not clear how its reaction will align with U.S. policies. In the short-term, Turkey will likely intensify its efforts against ISIS, providing concrete opportunities for improved U.S.-Turkish cooperation. Stepped up efforts towards sealing the Syrian border and disrupting ISIS networks within Turkey would be welcome.

But if these types of attacks continue, or escalate, they would unleash chaos, suffering and economic disruption which could force the government back into its instinctual position of blaming Western conspiracies?the interest rate lobby, Lufthansa, or The Wall Street Journal, among favorite examples?for its troubles. If Erdogan and the AKP take this route, rather than examining how their own policies and ideological predilections contributed to the situation, Turkey will become an ever more angry, isolated, and uncooperative ally.

Searching for Answers After Ankara Bombing