Update: On August 25, the IAEA Board of Governors met to discuss the cost of the Iran deal for the agency. Director General Yukiya Amano reported that the IAEA would need an estimated $10.6 million annually in addition to its regularly allocated budget for Iran to cover its increased responsibilities. For 2016, that amount would have to come from extra-budgetary contributions from IAEA member states. In later years, the amount could be incorporated into the IAEA’s regular budget.  Based on its research, the BPC finds the IAEA’s estimate to be conservative, and that the additional personnel and equipment needed to carry out increased monitoring of Iran’s nuclear sites could cost double or even triple that amount.

“This deal is not built on trust, it is built on verification,” President Barack Obama said of the final nuclear accord agreed to by Iran and international powers on July 14. The body tasked with verifying Iran’s compliance with the Joint Comprehensive Plan of Action (JCPOA) is the International Atomic Energy Agency (IAEA), a U.N. agency based in Vienna. But it seems unlikely that the IAEA will be able to carry out the enhanced monitoring regime called for in the Iran deal without a significant increase in the funding it receives from the United States and other member governments.

Already, the November 2013 interim agreement expanded IAEA access to Iran’s nuclear sites, at an estimated additional cost of $12 million per year, of which the United States contributed approximately $1.8 million. Our calculations suggest that implementing the increased access and monitoring responsibilities contained in the JCPOA could require $36 million annually on top of the IAEA’s pre-deal budget for inspections in Iran. 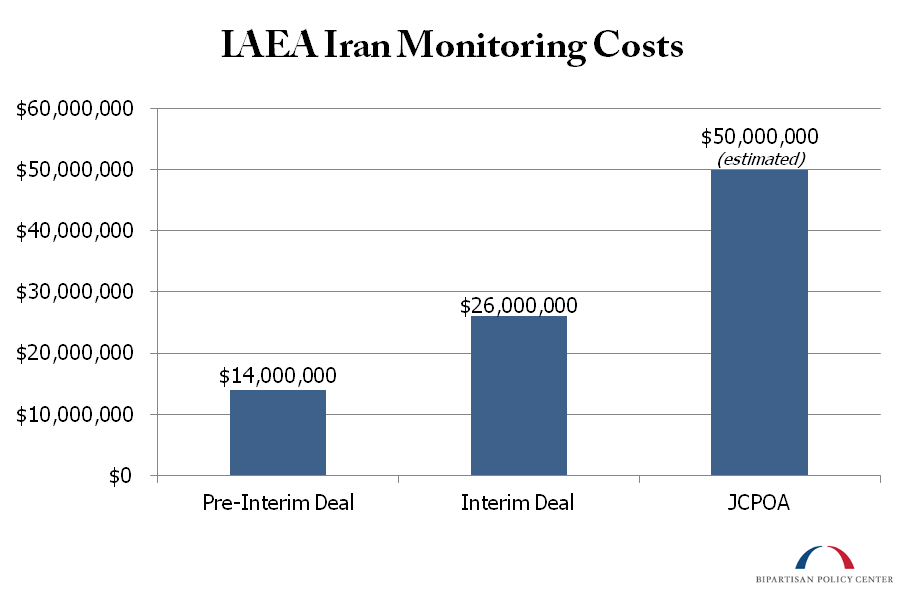 Under the terms of the final deal, Iran will abide by the IAEA Additional Protocol, as well as another provision known as the Modified Code 3.1. These legal obligations, in place in over 120 countries with nuclear facilities safeguarded by the IAEA, are designed to assist the U.N. agency in confirming that states are using nuclear material for solely peaceful purposes.

The IAEA will have access to Iran’s nuclear supply chain, including its enrichment facilities; uranium mines and mills; and centrifuge production, assembly, and storage facilities. Iran has so far declared to the IAEA 18 nuclear facilities and nine other locations inside hospitals where nuclear material is customarily used. Additionally, the IAEA will be able to petition for access to “suspicious” undeclared facilities?though that process may take as long as 54 days to resolve.

The IAEA will also use modern technologies to conduct “continuous monitoring” of Iran’s declared nuclear sites, including: “on-line enrichment measurement and electronic seals which communicate their status within nuclear sites to IAEA inspectors, as well as other IAEA approved and certified modern technologies in line with internationally accepted IAEA practice. Iran will facilitate automated collection of IAEA measurement recordings registered by installed measurement devices and sending to IAEA working space in individual nuclear sites.”

As part of a side agreement between Iran and the IAEA, the U.N. agency will also be tasked with investigating the possible military dimensions of Iran’s nuclear program, to reach a comprehensive understanding of Iran’s past weaponization research. 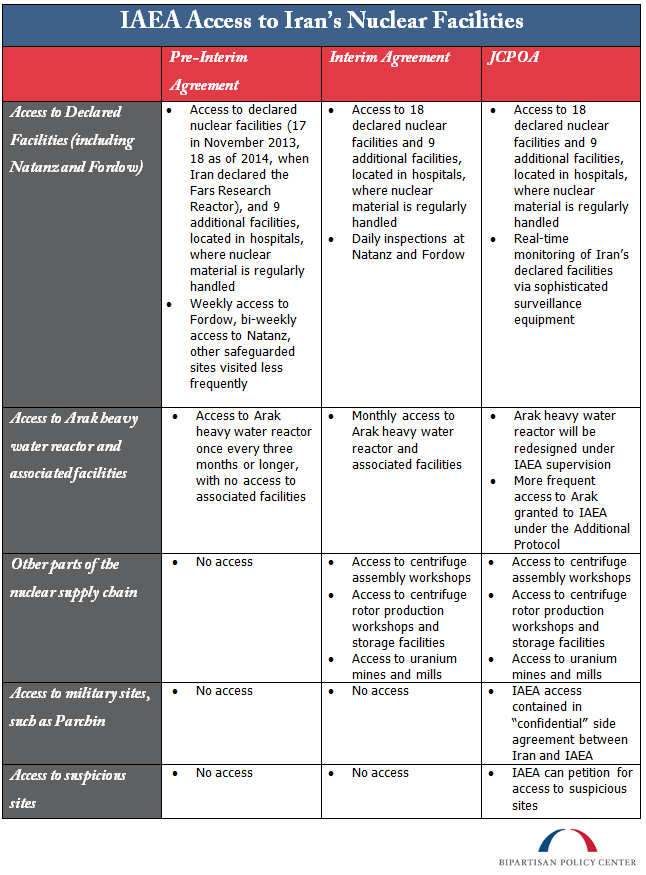 IAEA funding comes from assessed (mandatory) and voluntary contributions from member states. Assessed contributions are determined by each country’s gross national income. The United States is currently the largest contributor to the IAEA, funding around 25 percent of the agency’s regular budget. The IAEA’s overall regular budget for 2014 was approximately $386 million; of that amount, approximately $145 million was allocated to nuclear verification activities in over 160 countries, including Iran. Prior to the interim agreement and the JCPOA, Iran has historically taken up 12 percent of the verification budget. 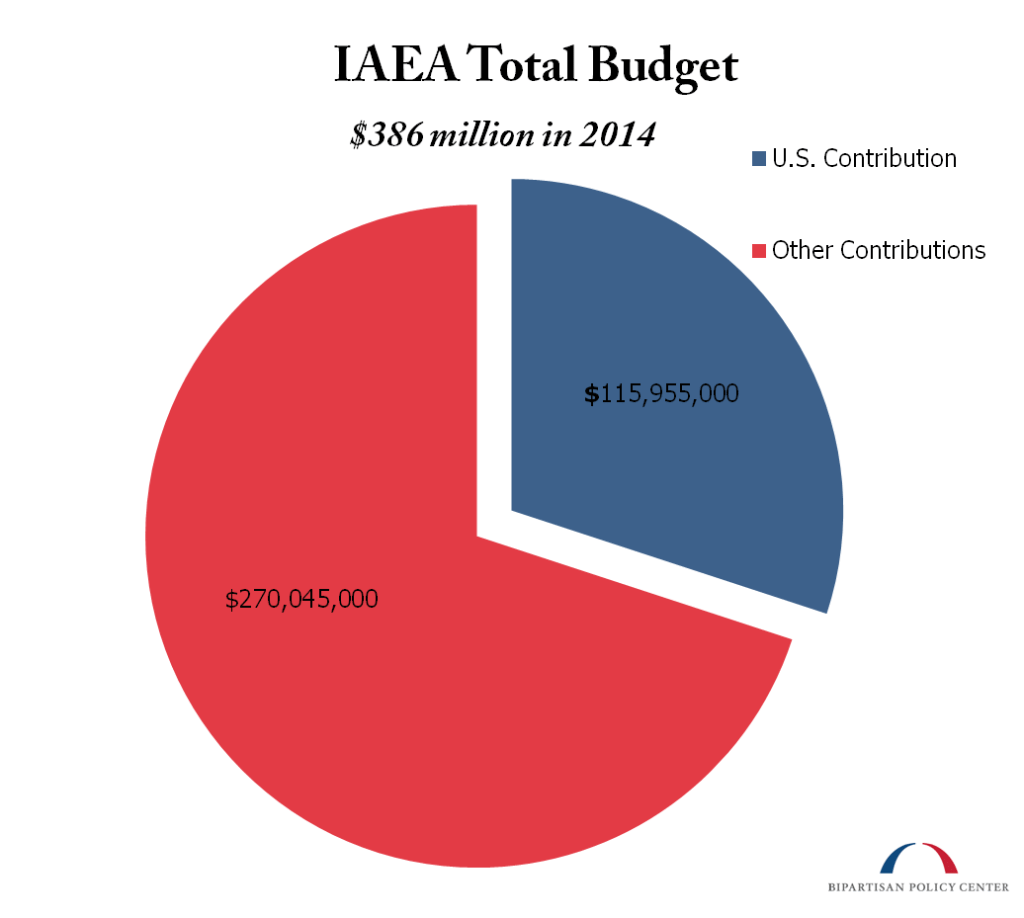 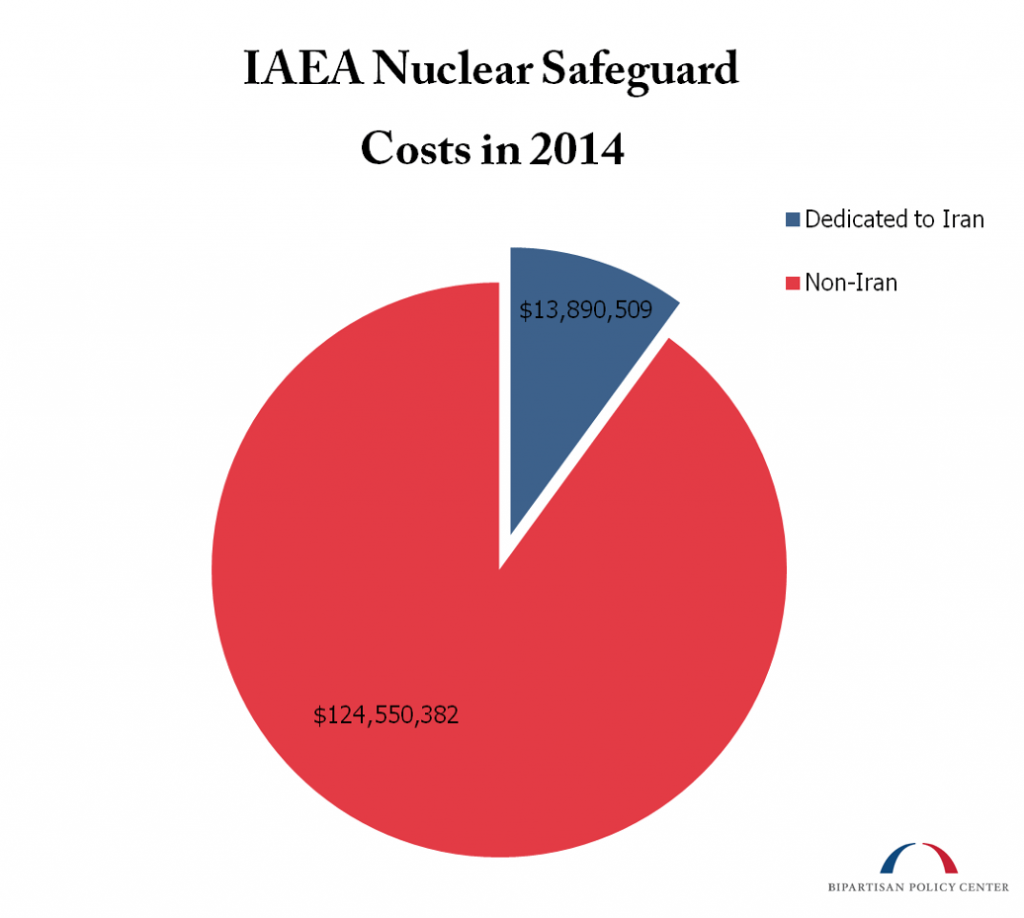 However, while the IAEA’s responsibilities are growing, so are its budgetary pressures. The IAEA’s Board of Governors, made up of representatives from its 35 member states, has put in place a policy of “zero-real growth” that has prevented its budget from growing commensurate with the agency’s increasing workload. Instead of raising assessed contributions from its member states, thus providing guaranteed funding, IAEA Director General Yukiya Amano has had to appeal for voluntary contributions to carry out the agency’s vital tasks. The IAEA’s verification budget for 2015 shows only a minimal increase, to approximately $147 million.

The interim deal, according to Amano, doubled the IAEA’s workload in Iran, and cost the IAEA an estimated $1 million a month on top of the budget already dedicated to Iran inspections. In 2013, the total cost for monitoring in Iran was approximately $14 million, before the interim deal went into effect in January 2014. This means that additional costs under the interim deal, at the cost of $1 million per month, almost doubled the total cost of the IAEA’s Iran program.

Later this month, the IAEA Board of Governors will meet to discuss the financial implications of the JCPOA on the agency’s budget. To implement the JCPOA, Amano stated in a press conference following the deal, “the funds needed for the new agreement cannot be too different.” However, despite Amano’s assertion, it’s difficult to imagine that the IAEA could fund its increased workload on the budget it used for inspections under the interim agreement.

Under JCPOA the number of inspectors dedicated to Iran is set to triple. The IAEA’s Iran Task Force, created in 2012, had a staff of 50 prior to the JCPOA. Under the terms of the JCPOA, there will be 130-150 inspectors dedicated to Iran. To implement the interim agreement, the IAEA reportedly had to bring former inspectors back from retirement?it is unclear where the agency will find the manpower to carry out its increased workload in Iran while maintaining its verification programs around the world. If the IAEA’s expanded workload and additional inspectors increase costs in a manner similar to the interim agreement, implementing the JCPOA may cost $3 million a month in addition to the IAEA’s regular budget, or $36 million more a year.

Additionally, while only a small number of these inspectors will likely be in Iran at any given time, the deal also stipulates that Iran will accommodate the IAEA for the “long-term,” meaning Iran will provide IAEA inspectors with working spaces near nuclear sites, though it is unclear whether or not Iran will fully cover that cost.

Real-time monitoring of Iran’s nuclear sites will require new technology. Previously, Iran limited inspectors to using older technologies which required inspectors to gather data manually and ship it to IAEA headquarters in Vienna for analysis, slowing down the process. Procuring, transporting, and installing new equipment will be a significant one-time cost to the IAEA, and the agency will have to continue to pay for its upkeep during the deal’s duration.

For comparison, it makes sense to examine the Carlsbad Environmental Monitoring and Research Center (CEMRC). Part of New Mexico State University, CEMRC is funded by the Department of Energy to carry out monitoring of the Waste Isolation Pilot Plant (WIPP), a repository site for waste from the research of production of nuclear weapons. In 2014, CEMRC proved its vital role by being the first to detect a radiation leak at WIPP. Recovery efforts following the leak are still underway, and CEMRC continues to conduct environmental monitoring for traces of radiation.

To carry out its monitoring duties, CEMRC uses much of the advanced technology that the IAEA will now be permitted to use in Iran. Since its initial creation in 1991, CEMRC has run on a budget of between $3 million and $4 million a year, and recently was funded $15 million for the next five years. Based on this, we estimate that the IAEA will require a one-time cash infusion of between $4 million and $5 million to purchase technologies and build infrastructure for continuous monitoring in Iran.

To ensure that the IAEA has the necessary funding to carry out its duties, the international community will need to step in, as it did during the interim agreement. The IAEA is on the frontlines of the JCPOA, and its inspectors on the ground in Iran will be the ones to detect whether Iran strays from the terms of the agreement. In the long term, funding the Iran deal through ad hoc voluntary contributions may prove unsustainable, and detrimental to the IAEA’s critical work in Iran.

With the IAEA’s monitoring responsibilities of Iran’s nuclear facilities extending for over a decade?and Iran’s compliance with IAEA Additional Protocol in place permanently?the increased financial cost should be reflected in the IAEA’s regular budget and financed by the mandatory contributions of members, which would provide a stable and assured source of funding. The IAEA Board of Governors meeting on August 25 will provide an opportunity to discuss these important issues necessary for implementing the Iran deal.

How Does the Iran Deal Measure Up? Final Text Versus Framework‎ Agreement

Can Iran Gain Nuclear Weapons Capability While Complying with the Deal?