In defending the April 2 framework agreement that laid the foundation for the final nuclear deal with Iran, President Obama admitted that one of its chief weaknesses, and one of his main concerns, was that, “in year 13, 14, 15, they have advanced centrifuges that enrich uranium fairly rapidly, and at that point the breakout times would have shrunk almost down to zero.”

In the text of the final deal, known as the Joint Comprehensive Plan of Action (JCPOA), it is possible to identify the specific provisions the president was likely referring to (Sections F, G, I, and K of Annex I), and understand how they might allow Iran to work up to the edge of a nuclear weapons capability, legally, and calculate when Iran might reach such capability.

It turns out that, even if Iran were to honor all of its obligations and fully comply with all the restrictions in the JCPOA, the deal would not prevent a nuclear Iran indefinitely. Starting in year 13, Iran will be able to breakout (produce enough fissile material for a nuclear weapon) in about 10 weeks, down from one year. But it would not be until year 16?later than President Obama’s initial assumption?that Iran would attain nuclear weapons capability and a breakout time of less than 3 weeks. 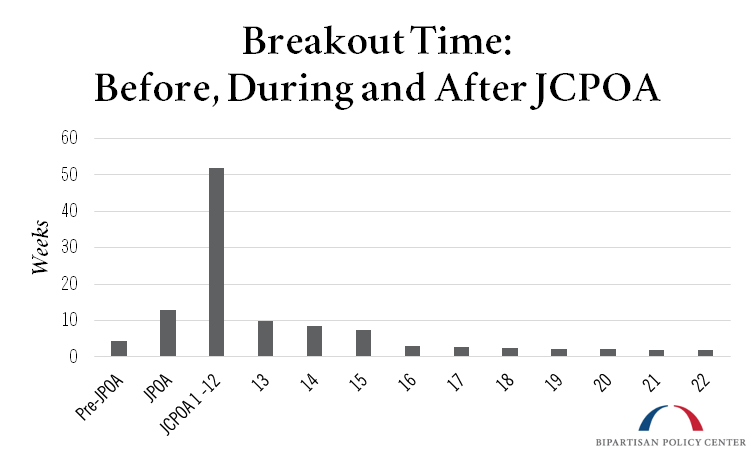 The critical question is how quickly can enough fissile material be produced for a nuclear weapon, commonly referred to as a “breakout”? Related questions are: would it be possible to detect production of fissile material before the task is completed? And can any such attempted breakout be stopped? The JCPOA seeks to keep Iran from gaining a nuclear weapons capability by putting in place, for a certain amount of time, restrictions that would mean any attempted breakout would take at least a year, requiring inspections that would detect such a breakout promptly, and creating a mechanism to punish Iran if it does cheat on the deal and attempt to develop a nuclear weapons capability.

Assuming the deal works as intended during its term, the major issue is what will happen to Iran’s breakout timing once the JCPOA’s restrictions begin to expire. Proponents of the deal point out that the inspections and monitoring regime will remain intact, some of it indefinitely. But should Iran’s ability to produce fissile material ever exceed the detection capacity of the inspections, it will have effectively achieved nuclear weapons capability.

First, what breakout timing could outpace detection and prevention? One year seems to be enough, based on the comfort of the United States with that timeline as enshrined in the JCPOA. Even a two- to three-month window seems acceptable, as keeping Iran at that distance was the stated objective of the interim Joint Plan of Action agreed to in November 2013. The tipping point seems to arrive around one month. The JCPOA puts in place a 30-day long dispute resolution process?where the United States or other parties to the deal can confront any Iranian cheating. It would follow that world powers would have difficulty confronting and rolling back any Iran breakout that could occur faster than that. Thus, we will assume that to acquire nuclear weapons capability, Iran would need a breakout ability of roughly four weeks or faster.

Second, at what point might Iran have the capability to breakout in four weeks or less? Numerous variables affect how long breakout might take?primarily the number and efficiency of centrifuges being used as well as the amount and enrichment level of the starting uranium feedstock?but we can look to the administration’s own judgment for guidance. Numerous U.S. officials have stated that the JCPOA is designed to keep Iran’s breakout timing at one year. That means that the U.S. government has calculated that with the nuclear infrastructure Iran will be permitted to retain under the deal?5,060 IR-1 centrifuges and 300 kilograms of 3.5 percent enriched uranium?it would take 12 months to produce enough highly-enriched uranium for a nuclear weapon. Assuming that Iran’s enriched uranium stockpile remains constant at 300 kilograms, we can calculate that, to be able to breakout in four weeks or less, Iran would need to have an enrichment capability equal to 13 times more IR-1 centrifuges (65,000 IR-1s) than it has now.

But what if Iran’s stockpile of enriched uranium were to grow? Here, too, U.S. government statements can serve as a guide. Under the terms of the interim Joint Plan of Action (JPOA), Iran was allowed to operate roughly 9,000 centrifuges and more than enough 3.5 percent enriched uranium to produce fissile material for a nuclear device. Statements by government officials suggest that they believe that Iran’s breakout timing under the JPOA would be roughly two to three months. Taking the more conservative estimate, we can calculate that, starting with a sufficient stockpile of 3.5 percent enriched uranium (about 1,800 kilograms), Iran would need roughly 30,000 IR-1 centrifuges to be able to breakout in four weeks or less.

Knowing this, the question of whether or when Iran might reach nuclear weapons capability under the JCPOA can be refined as follows:

Is there a point in the lifetime of the JCPOA at which Iran would be permitted to have, while remaining compliant with the terms of the deal, either:

Answering that question will require examining the terms of the JCPOA itself.

Centrifuge Operation
Under the JCPOA, Iran is, at first, only allowed to enrich uranium in 5,060 centrifuges located at the underground Natanz Fuel Enrichment Plant. During this period, the operational centrifuges are required to be the IR-1 model, the same antiquated model based on designs purchased from Pakistan’s A.Q. Khan that Iran has been using for enrichment for the last 12 years.

However, the number of centrifuges at Natanz is only limited for the first decade. And given that the facility is designed to hold 50,000 centrifuges, constraining Iranian enrichment to Natanz between years 10 and 15 will have no significant effect on the scope of that activity.

Thus, 10 years into the deal, Iran will be able to begin expanding its enrichment program beyond just 5,060 centrifuges. That expansion will not be unlimited, at least so long as Iran maintains its obligations under this deal. Instead it will be governed by a long-term plan that Iran will have to submit to the International Atomic Energy Agency (IAEA) as part of its compliance with the JCPOA. But even without the public release of this plan, other parts of the deal hint at how much enrichment capacity Iran will gain and how quickly it will do so.

Advanced Centrifuges
While JCPOA might limit the centrifuges Iran can use to enrich uranium for the first decade, it does allow for the continuation of research into more advanced centrifuge models and even their production in large quantities. For the first eight years of the deal, Iran is allowed to enrich uranium for research purposes, but immediately dilute the product so as not to accumulate any additional enriched uranium, in small quantities of IR-4, IR-5, IR-6, and IR-8 centrifuges. After this period it will be allowed to expand its testing of IR-6 and IR-8 centrifuges to up to 30 machines of each type.

This larger scale testing is clearly so that that these next-generation centrifuges will replace the IR-1 in Iran’s enrichment facilities. JCPOA accepts that “Iran will begin phasing out its IR-1 centrifuges in 10 years” (Par. 2) as well as that “Iran will begin to install necessary infrastructure for the IR-8 at Natanz?after year 10.” (Annex I, Sec. I, Par. 53) In anticipation of this switch over from the IR-1, JCPOA even allows Iran to get a head start in producing a stockpile of IR-6 and IR-8 centrifuges for future use. Beginning in year nine, the deal allows Iran to manufacture 200 machines of each model, at first without all the necessary parts put together and then, after year 10, fully assembled (Annex I, Sec. K, Par. 63).

Moving Iran’s production of enriched uranium to these next-generation models is significant because of how much more effective they will be at this task. Pinning down the performance of the IR-6 and IR-8 machines can be tricky as there is no real data to analyze yet, but a comparison can be made to the IR-1. The IR-6 is actually a slightly larger version of the IR-2m that Iran currently has installed, but is not operating, at Natanz. This model is commonly reported to be roughly five times as fast as the IR-1. The IR-8, on the other hand, has been described by Iranian officials as capable of enriching uranium 17 times faster than the IR-1. Thus, the 200 centrifuges of each of the IR-6 and IR-8 models that Iran will be allowed to produce after year eight, actually represent the equivalent enrichment capability of an additional 4,400 IR-1 centrifuges each year.

What is not specified in the text of the JCPOA, contained instead in the separate plan Iran will file with the IAEA, is when these advanced centrifuges would be allowed to start enriching uranium. We know that it will not be before year 11?restrictions on number and type of operational centrifuges, as well as stockpiling enriched uranium produced in IR-6 and IR-8 centrifuges, remain in effect for 10 years. But at what point after that and at what rate Iran will be permitted to begin installing the centrifuges it began building in year nine remains unclear. Based on the comments made by President Obama?that the worry of a quick breakout only begins to emerge in year 13?it would seem that the IR-6 and IR-8 centrifuges would not be switched on immediately after year 10, but would begin enriching before year 15. 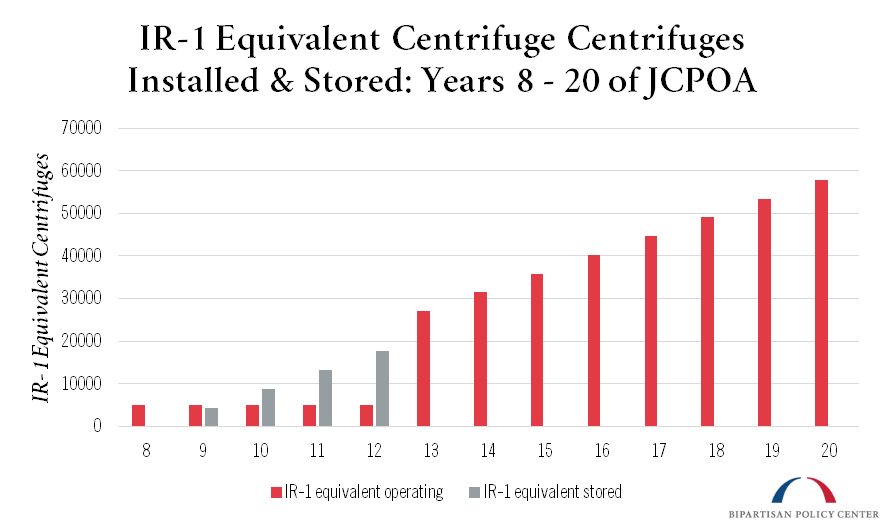 Enriched Uranium Stockpile
The final piece of the breakout time equation is the size and enrichment level of the starting feedstock. Enriching natural uranium to 3.5 percent actually takes longer than enriching from 3.5 to 90 percent (weapons grade). That is why the JCPOA imposes significant limits on the amount of 3.5 percent enriched uranium that Iran is allowed to keep on hand. By ensuring that it does not have enough of it to produce enough fissile material for a nuclear device, the deal prolongs the breakout timing. 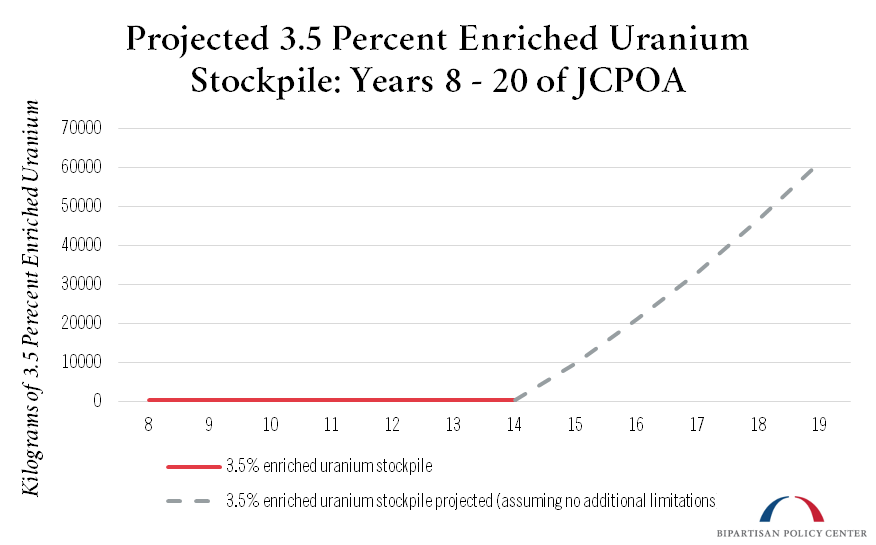 The first scenario, in which Iran’s stockpile of 3.5 percent enriched uranium remains at 300 kilograms, would require Iran to acquire the equivalent of 65,000 IR-1 centrifuges to reach nuclear weapons capability. Given that it will already have 5,060 of those installed, the question is how long it would take Iran to install the equivalent of another 60,000 IR-1s. Given that we know Iran will be producing the equivalent of roughly 4,400 IR-1 centrifuges a year in the form of IR-6 and IR-8 machines, we can calculate that it would take almost 14 years after manufacturing of the advanced centrifuges began to produce the necessary enrichment capability. Under this first scenario, Iran would acquire nuclear weapons capability 22 years (an eight year restriction on building advanced centrifuges followed by 14 years to acquire enough of them) after JCPOA goes into effect. 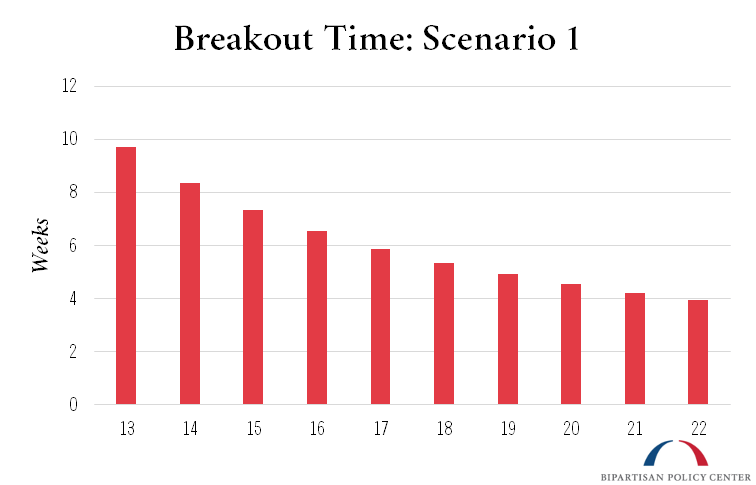 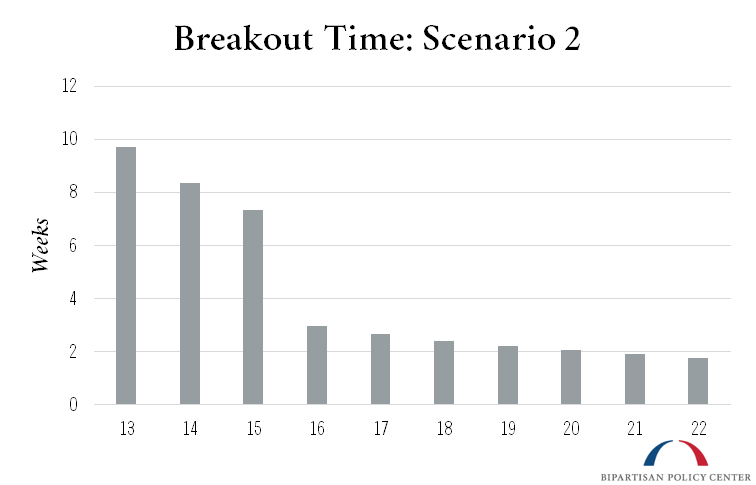 It turns out that President Obama was right in his general assertion, although perhaps overly pessimistic in his calculations: JCPOA does not prevent a nuclear Iran indefinitely; Iran’s breakout window drops precipitously sometime between years 10 and 15 of the deal; but Iran will attain nuclear weapons capability while remaining fully compliant with the JCPOA, just after 16 years, not 13 as predicted by the president.

How Does the Iran Deal Measure Up? Final Text Versus Framework‎ Agreement