BPC has narrowed its projection window for the debt limit “X Date,” when the federal government would not be able to pay all its bills in full and on time, to early to mid-October. This projection parallels the one released recently by the Congressional Budget Office, which reached a similar conclusion. 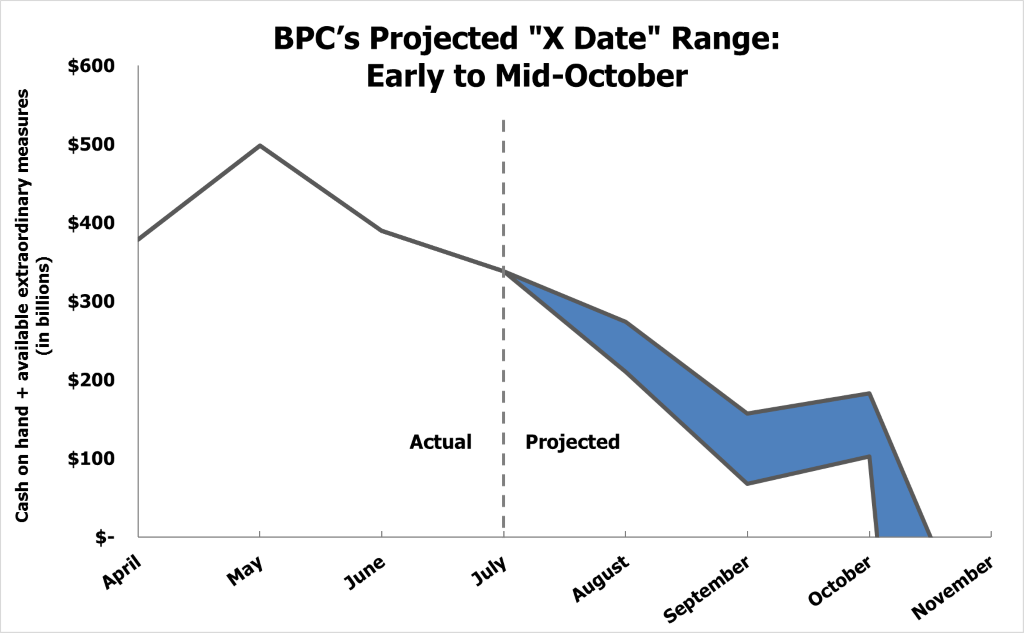 The debt limit was reinstated on March 16, 2017, at $19.8 trillion. Treasury Secretary Steven Mnuchin immediately deployed “extraordinary measures,” which are congressionally authorized maneuvers that allow for temporary additional borrowing so that the government can continue paying its bills. Because of the large federal deficit, if the debt limit is not increased or suspended, those extraordinary measures will run out in the coming months. Shortly thereafter, Treasury’s cash reserves will be depleted. Upon reaching that point, known as the “X Date,” the U.S. government will no longer have any means, aside from insufficient incoming revenues, by which to continue meeting its obligations.

BPC has updated its projection of the “X Date” after a review of the latest financial data for the federal government from the month of June, including the Treasury Department’s financial statements reporting the status of its extraordinary measures. Key to the forecast were the individual and corporate quarterly tax receipts due by June 15. Federal revenues have been lower than expected in recent months, possibly in part due to taxpayers shifting capital gains to future years in anticipation of lower tax rates through tax reform. This trend, among other factors, led to our updated projection that the “X Date” will fall in early to mid-October from the previous range of October to November.

It is important to note that predictions of federal spending and revenues can, and often do, miss the mark. The federal government’s balance sheet is too complex to project a specific day for the “X Date” with a high degree of certainty. Moreover, it could even come before or after BPC’s projection range, especially if unanticipated legislative or economic events were to occur.

That said, there is currently significant evidence to support an “X Date” within the early to mid-October period. The first few weeks of October have, historically speaking, tended to include large payments and net negative cash flows. These payments, which include Social Security, Medicare, Medicaid and other obligations, have contributed to an average $104 billion cash flow shortfall in October over the past five years. In addition to the regular, recurring payments, a large payment must be made on October 2 to the Military Retirement Trust Fund ($81 billion in 2016). 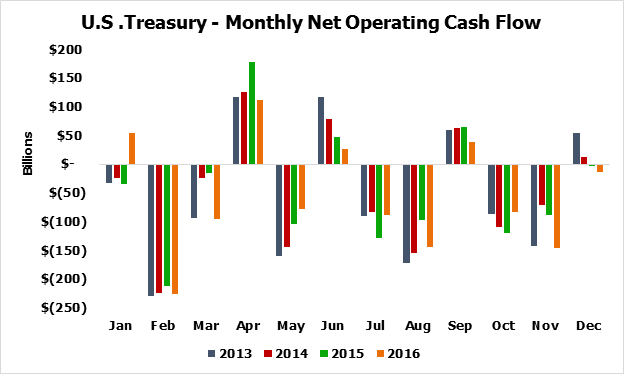 BPC’s narrowed projection range and the similar CBO projection suggest that in order to definitively prevent serious economic consequences that could be associated with reaching the “X Date,” policymakers would need to take action on the debt limit well before October. With government funding (appropriations), health care, and several other pressing issues on tap, this could shape up to be a chaotic end to the fiscal year.