The U.S. immigration system has a capacity problem. We continue to rely on border enforcement policy that is unable to adequately handle migrant surges caused by humanitarian crises. Migrant caravans like the ones that captured attention in 2018 are often identified months prior to their arrival at the border, yet the United States consistently reacts with deterrence methods that both strain the enforcement system and ignore the humanitarian crisis at hand. The United States needs a flexible, nimble response plan to adjust to dramatic shifts in migrant flows at the U.S.-Mexico border.

Why Do We Have a Capacity Problem?

The Refugee Act of 1980 established the first standardized humanitarian protocols in American immigration law. The act formalized refugee resettlement and created an asylum system allowing people arriving at the border to request asylum for a well-founded fear of persecution due to race, religion, nationality, political opinion, or membership of a particular social group. While the Refugee Act and later legislation have provided much needed guidance to address humanitarian migration, the system still relies on old assumptions about who migrates and why.

In the 1980s and 1990s, the majority of those apprehended at the border were single, male, economic migrants from Mexico and Central America who could be quickly processed and deported from the United States directly into Mexico. However, recent migrant flows at the U.S.-Mexico border have shifted toward children and family units from El Salvador, Guatemala, and Honduras (known as the Northern Triangle) seeking asylum in the United States as the number of these individuals surpassed the number of Mexican migrants crossing the border illegally. 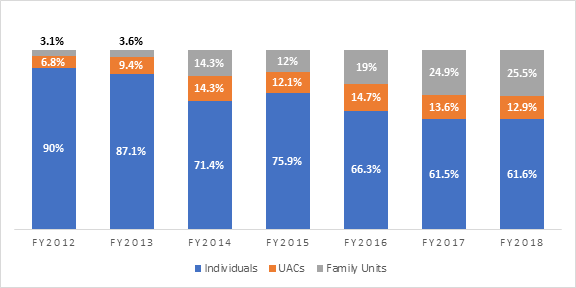 Although overall apprehension levels remain at historically low levels, this shift in migrant flows have pushed the capacities of CBP facilities at the Southwest border. These facilities, which were designed for short-term populations of single, able-bodied men from Mexico, are now housing increasing numbers of women and children from the Northern Triangle. They wait in custody for longer periods of time as border officials struggle to accommodate the needs of family units without adequate resources for this population, straining their capacity and creating humanitarian concerns for those detained.

The influx of asylum cases from this population of migrants has also strained the immigration court system by worsening the case backlog, which already means each case can take years to conclude. Over the last 10 years, the case backlog in the immigration courts has drastically increased due to the Obama era policy to deport more undocumented immigrants, the influx of unaccompanied minors since 2013, and the Trump administration’s enforcement expansion. Most defendants wait at least two years before appearing before a judge to make their claim.

Rather than strengthening the immigration system’s capacity to meet these shifts, the United States has fallen back on deterrence to stem these migrant flows. Since 2013, the Obama and Trump administrations have used family detention and increased enforcement presence at the border as their main border management strategy. However, the number of family units apprehended at the border has increased, since these measures fail to address root causes of migration in the region and strengthen the system’s capacity to receive these populations.

Establish protocols to rapidly shift asylum resources to the U.S. border.
Increasing deterrence while neglecting asylum is not a strategic use of resources. Border security suffers when border officials do not have the proper facilities and resources to receive and process the large influx of asylum seekers. We should build and expand U.S. Customs and Border Protection border facilities and increase the cadre of specialized CBP personnel like asylum officers and translators so that border authorities can adjust to sudden shifts in migrant flows. The faster we can provide additional capacity during a surge period, the faster we can process asylum claims and removals without major disruption to the system.

Hire more immigration judges and increase the number as needed to address surges at the border.
The expansion of the immigration system’s surge capacity also requires significant investments in our immigration court system. A previous BPC study found that adding 100 more judges during the first major wave of humanitarian migration from Central America in 2014 would have reduced the 2018 backlog level from 714,067 cases to 330,267. Given that we are facing the same issues in 2019, expanding the cadre of immigration judges would ensure that the immigration court system has the capacity to manage sudden surges in complex cases without sacrificing its ability to effectively review asylum and removal cases.

Maintain programs that strengthen human security in countries migrants are fleeing.
The emergency at the border isn’t national, it’s regional. High levels of violence and economic crisis in Central America have been largely responsible for creating the humanitarian crisis at the border. Enforcement-only policy does not address the regional factors that lead migrants to seek protection and economic opportunity in the United States, and it ignores the huge risks they are willing to take to escape horrible conditions at home. Any domestic policy to address humanitarian crises at the border must include foreign aid that enables regional governments to address the root causes of migration and strengthens their ability to receive and process more migrants seeking humanitarian protection.

The United States should aim to provide a proportional response that includes investments in flexible response measures at the border, strengthening the immigration asylum system (including immigration courts), and providing aid to sending countries. Rather than using expensive deterrent efforts to tackle a small increase in overall migrant flows, a proportional response ensures that the United States uses its resources to intelligently manage current and future migrant surges.

A Roadmap for a DACA Deal