Over the last 10 years, the backlog for immigration court cases has expanded at a significant pace as the system’s overstretched judges struggle to work through their extensive dockets. Factors such as the Obama administration’s first term efforts to deport more undocumented immigrants, the increases in unaccompanied minor arrivals since 2013, and the Trump administration’s expansion of immigration enforcement have impacted this backlog. However, the small cadre of immigration judges has severely limited the courts’ ability to process more cases, amplifying these effects.

In response, the Department of Justice and some members of Congress have proposed various measures to address this problem, including issuing case quotas and hiring more judges. By using court data to estimate the impact on the backlog of hiring more judges, BPC finds that increasing the number of immigration judges would reduce the backlog by 2025, a step that would strengthen the U.S. immigration system’s enforcement and humanitarian components by shortening the wait periods for court hearings that can remove people or grant them asylum or other relief from removal.

The small number of immigration judges relative to the increase in incoming cases has contributed to the immigration court backlog’s growth, extending the waiting periods for immigrants to have their cases heard. As Figure 1 shows, the case backlog grew from 186,108 cases in 2008 to 714,067 cases in 2018. As the backlog expands, however, the nation’s 321 immigration judges each process approximately 678 cases every year as of 2018, which is only 35 percent of the average 1,900 new cases they receive annually. As a result, the increased backlog has left most defendants waiting an average of two years before appearing before a judge, with the system completing fewer removals and asylum cases every year.

The backlog’s growth has prompted the proposal of various solutions. In April 2018, the Justice Department set minimum case completion quotas for immigration judges. Under the plan, judges would need to complete 700 cases per year, a 3 percent increase from the current average number of completed cases per year. Attorney General Jeff Sessions also announced that he would move 18 immigration judges to border detention centers that contain significant numbers of immigrants waiting for their immigration hearings.

Lawmakers have also released proposals that would increase the number of judges in the system to tackle this issue. The USA Act, a bipartisan bill introduced by Reps. Will Hurd (R-TX) and Pete Aguilar (D-CA), would add 165 more immigration judges to the courts over three years. The Protect Kids and Parents Act, which was introduced by Sen. Ted Cruz (R-TX) to address the separations of families at the U.S.-Mexico border, would add 375 judges to the courts.

BPC reviewed the potential impact of additional judges and adoption of case quotas on the current case backlog and its future growth. As Figure 2 shows, Senator Cruz’s proposal would reduce this backlog significantly faster than the USA Act and Attorney General Sessions’ recommendations, reducing the backlog to 500,000 cases by 2030.

Figure 2: Impact of Multiple Strategies on the Immigration Court Backlog by 2030 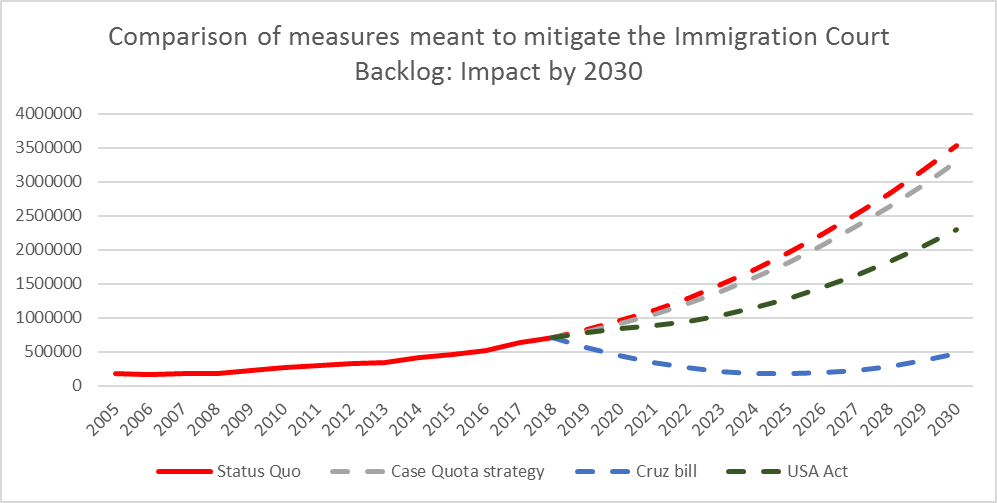 The efficacy of proposals to increase the number of judges over additional efficiency measures, such as completion quotas, raises the interesting issue of whether adding more immigration judges earlier this decade would have offset the backlog’s growth, especially as more families and unaccompanied children arrived at the U.S.-Mexico border in 2014. To test this theory, we developed a scenario where the government assigned 100 immigration judges who were trained and cleared but inactive to immigration courts in 2014 to handle the increased caseload.

As Figure 3 shows, adding 100 additional judges to the court system in 2014 would have limited the backlog’s growth. The backlog would have dropped through 2016 before rebounding slightly in 2017, which corresponds with the large number of immigrants who attempted to enter the United States before President Trump’s inauguration and his expansion of interior enforcement actions targeting more undocumented immigrants. However, this projected increase is significantly smaller than the backlog’s actual growth during this period, showing that adding more judges could have been one of the most effective ways to offset this growth over time.

Adding 100 more judges in 2014 would have allowed the government to make significant savings in enforcement costs between 2014 and 2018. While this measure would have cost the U.S. government $109 million during this period, it would have saved $823 million in detention costs to house people apprehended and detained by immigration authorities during this period.

These findings have important implications for improving the immigration enforcement system’s capacity to process asylum and removal cases and deter future illegal border crossings. As we have written previously, hiring more immigration judges and staff, decreasing wait times for hearings to months instead of years, would allow the system to remove ineligible immigrants more quickly and could have a greater impact toward deterring undocumented immigration. This strategy would also allow the system to process more cases without compromising the integrity of the nation’s asylum system, which relies on immigration judges to hear asylum claims for people in removal proceedings. In short, adding more judges would ensure that the system fulfills its dual roles of strengthening the immigration enforcement system while providing humanitarian relief to asylum seekers.

Immigrants: Can the Government Revoke Your Citizenship?