In Fiscal Year (FY) 2017, U.S. Customs and Border Protection reported apprehension numbers along the U.S.-Mexico border that were significantly lower than in recent years, leading some commentators to hypothesize that President Trump’s harsh immigration rhetoric and promises of stronger border enforcement created a “Trump Effect”, that deterred migrants from crossing illegally into the United States. However, FY2018 has seen border apprehension numbers return to previous levels, suggesting that the “Trump Effect” has faded as more people?including families?attempted to enter the United States illegally. BPC found that perceptions of more aggressive enforcement are not likely to create long-term drops in apprehensions without specific resource or policy changes, and may also be limited because they do not alter long-term economic, demographic, and national security factors that shape illegal migrant flows into the United States.

By comparison, following the election and through the first three months of the Trump administration, actual apprehensions fell from 47,211 in November 2016 to 11,100 in April 2017, a difference of over 50,000, suggesting that fear of additional enforcement or more severe policies based on the president’s campaign rhetoric may have deterred many immigrants from attempting unauthorized entry to the United States.

This effect becomes even clearer when juxtaposed against the November 2016 election and President Trump’s inauguration in January 2017, because the reduction in apprehensions began even before Trump took office. As Figure 2 shows, however, the “Trump Effect” faded away, as apprehension numbers returned to prior levels by February 2018. Even after taking into account the level of average data deviation from the model, it does not appear that any deterrent effect from the increased enforcement posture lasted for a full year. 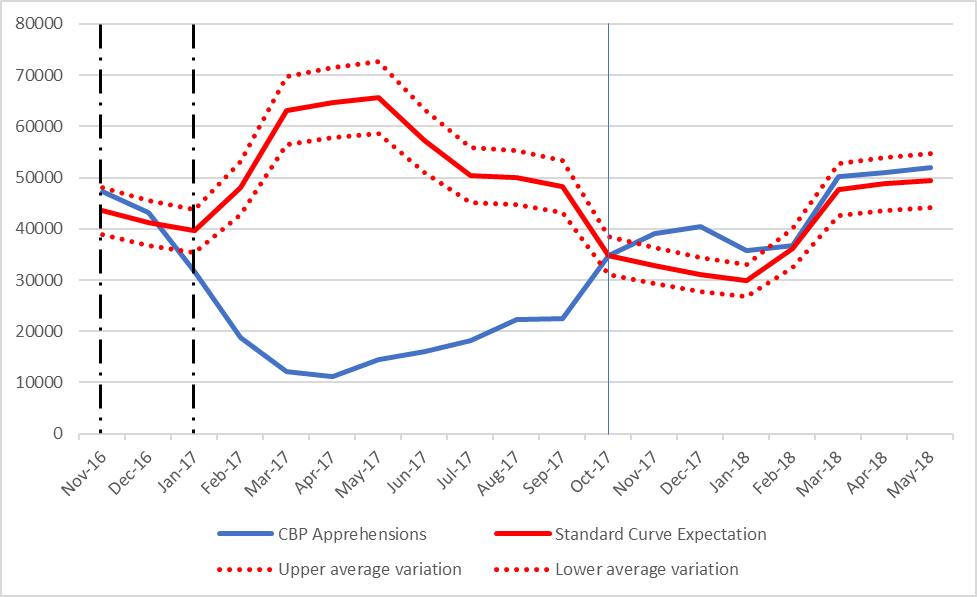 It is important to note that despite various rhetorical promises, there were no significant changes of border enforcement policy, or additional border resources, under the Trump administration until April 4, 2018, when the president announced the deployment of National Guard troops to the border. This was followed by the zero-tolerance policy announced by Attorney General Jeff Sessions on April 6. Thus, any declines?other than based on factors in the home countries or changes in migration patterns?were likely almost entirely due to the rhetoric around border policy at the time, and fears among immigrants that they may encounter stricter enforcement policies.

There have been previous drops in apprehension numbers, seemingly in response to significant changes in the perception of border security. During President Bush’s first term, FY2003 saw a discernable drop in apprehension numbers, which occurred after the Bush administration formally launched the new U.S. Customs and Border Protection agency with the creation of DHS, and its border enforcement components. Using the same predictive model design as earlier, we estimate that normal apprehension numbers would have been 31 percent higher for FY2003, peaking at 161,000 in March 2003. The divergence between our projections and the actual apprehension numbers during this period suggests that CBP’s launch may have deterred illegal immigration in this fiscal year.

As with the Trump effect, the importance of perception to the decrease in apprehensions is shown when the apprehensions numbers are contextualized. The lower pattern of apprehensions began to form after the passage of the Homeland Security Act in November 2002 but before the formal start of CBP operations in March 2003. However, CBP’s creation did not produce a lasting drop in apprehensions. As Figure 4 shows, apprehension numbers returned to our projected levels by September 2003. If we consider the average level of deviation from the model, it appears that apprehension levels returned to numbers consistent with the seasonal pattern even faster, by July 2003. This indicates that absent substantive changes in resources or border policies, deterrence based on perceived enforcement or “tough talk” produces only short-term gains. This is in contrast with actual policy changes that came later in the Bush administration, such the implementation of Operation Streamline and expedited removal between the ports of entry. 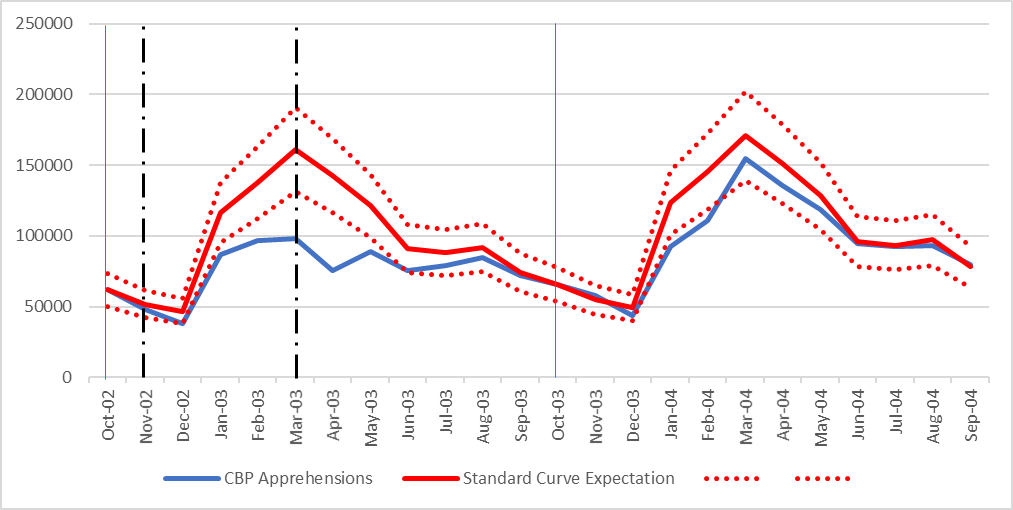 Promises and threats of increased action do little to actually alter migration patterns and deterrence in the long term. The mindset around border security, as well as accompanying policy strategies, must include a much more multidimensional approach to the factors impacting unauthorized immigration if they wish to create sustained deterrence. As past BPC research has argued, the decline in Mexican immigration to the United States since 2003 followed economic change in both Mexico in the United States, as well as long-term border security capacity building and policy changes. The Bush and Obama administrations adopted stronger interior and border enforcement measures during this time, including major increases in the deployment of Border Patrol agents, technology and infrastructure at the border, and policy shifts including the consequence delivery system, expanding expedited removal, and increasing apprehensions and deportation of undocumented immigrants from the interior. There is little research measuring the respective impact of each of these individual tactics on the overall decline in unauthorized migration. However, clearly the combination of these longer-term strategies, along with the changes in the underlying migratory patterns, generated a longer-term decline in illegal immigration and apprehensions. Policy makers must focus on these multidimensional strategies if they want to see a long-term impact.

The New Middle on Immigration

Can the Administration Detain All Immigrant Families?