Apprehensions at the border between the United States and Mexico have precipitously dropped since January, owing to various factors such as the Trump administration’s enforcement priorities, the growth of the Latin American economy, and increased immigrant settling in Mexico. The rhetoric around border apprehensions, however, has continued steadily, various news outlets have emphasized the rising number of border apprehensions over the summer months. Examining the apprehensions data in context, however, can reveal a more nuanced picture of what these numbers signify, and can be used to situate the recent so-called “surge” in apprehensions in terms of on-the-ground realities at the southwest border. 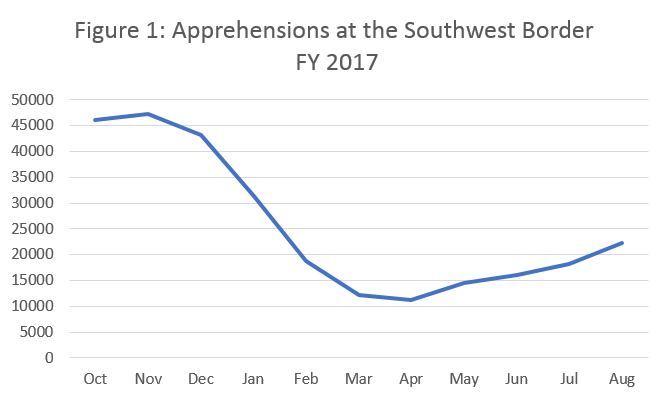 Figure 1 shows a sharp drop in border apprehensions in January followed by incremental increases since April. As we have written previously, the uptick in arrivals starting in May 2017 can largely be credited to the uptick in arrivals of unaccompanied children (UACs) and family units, which spiked in fiscal year (FY) 2014 and FY 2016, and as the data has exhibited year after year, arrivals typically increase in the summer months due to the warmer weather and less-harsh conditions at the border. Furthermore, these arrivals are still significantly lower than in the same time frame in previous years. In other words, while it is true that border apprehensions have now increased for four straight months, they have increased from a 17-year low in April 2017. 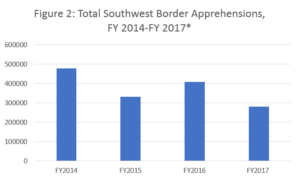 Figure 2 situates the data from FY 2017 in the context of the last four years of border apprehensions. While U.S. Customs and Border Protection (CBP) has not yet published September’s numbers, it is apparent that apprehensions from FY 2017 are lower than the totals from previous years. As mentioned above, FY 2014 saw a massive surge in UACs that dropped off in FY 2015 but regained momentum in FY 2016. While FY 2017 has seen an increase in UAC and family apprehensions over the summer months, it still lags behind the totals from FY 2014 and FY 2016. 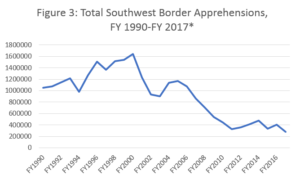 On hearing reports that border crossings are surging, especially as it relates to new policies and current events, or even that the number of crossings are going back up as a result of said new policies “wearing off,” many would assume that border crossings must be a big problem. However, this framing leaves out important context for apprehensions in recent years and the last few decades: southwest border apprehensions have remained under 500,000 since FY 2010 and have not reached 1 million since 2006 (see Figure 3). In fact,1 million apprehensions per year was a regular occurrence from 1990 through 2001. However, a predictably lower level of apprehensions has been the new normal since that time. 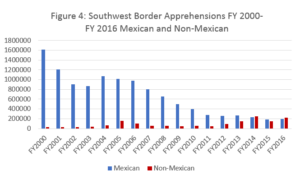 If the political rhetoric around immigration is to be believed, undocumented Mexican immigrants are crossing the border unabated. As we have seen, border crossings are actually significantly down, and in fact, the unauthorized population in the United States has not seen major growth in many years. In addition, as demonstrated in Figure 4, Mexicans are no longer the majority of border crossers apprehended at the southwest border, a significant change from what the levels in the early 2000s show. Today, more Central Americans than Mexicans are apprehended at the southwest border, a trend that has led the Mexican government to adopt enforcement policies to deter the influx of these immigrants into its southern border with Central America.

All in all, whether apprehensions are up or down depends on what context you consider when examining the data. Border apprehensions in August of 2017 are up from April through July of 2017, yes. But if one looks at the last few decades worth of data, or even the last few years, the numbers are markedly down. Additionally, undocumented immigrants from Mexico are crossing the border in much lower numbers, though the immigration debate still tends to center around the idea that Mexican border crossers are a key issue. Understanding both historical trends and recent developments is important to get the whole picture on border apprehensions.

Dobbs and Telehealth: What’s the Impact?