Southwest border apprehension data for fiscal year 2017 thus far, comprising October 2016 through May 2017, shows that total apprehensions are near the record highs of the same time period in previous fiscal years, as are apprehensions of unaccompanied children (UAC) and family units. However, the bulk of apprehensions occurred during the October-to-December time period, and there has been a significant decline in apprehensions since January. Around 225,000 apprehensions have been reported in total for the fiscal year so far, including 31,096 UAC apprehensions and 61,086 family apprehensions (Figure 1). The decline that began in January continued through April. A slight increase in apprehensions was observed in May, the first monthly increase since November and the first monthly increase since President Trump’s inauguration. The Trump administration claims that its tough stance on immigration is responsible for the decline since January. However, other potential reasons discussed below may include improved economic growth in Latin America, along with an increased willingness for Central American migrants to settle in Mexico, rather than continuing to the United States. 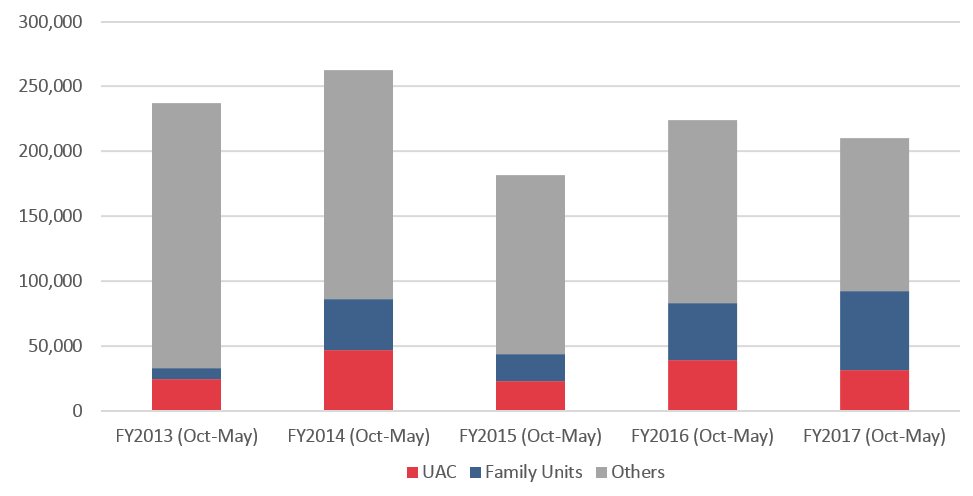 
Since FY2014, UAC and family unit apprehensions have represented a growing share of the total apprehensions at the southern border. Most of these children and families have been coming from Central America?notably El Salvador, Guatemala, and Honduras. Over the past few years, a drop in apprehensions is typically observed during December and January, however, the decline seen this year has been significantly larger than in previous years. In November FY2017, over 7,000 UACs were apprehended at the border. By April FY2017, UAC apprehensions were down to 998 (Figure 2). May numbers show a nearly 50 percent increase from April, although levels are still well below past years.


While it is not immediately clear why migration numbers are down, flows from Central America have been less predictable in recent years, and it is not certain that the decline is permanent.

Administration’s Posture. Secretary of Homeland Security John Kelly has stated that the drop in apprehensions is a result President Trump’s taking office and the executive orders on enforcement. Kelly also notes that since November 2016, human smugglers have hiked their fees by 130 percent, from $3,500 to $8,000 in some regions. In February, a Department of Homeland Security memo rescinded the Obama era enforcement priorities that offered some leniency to undocumented immigrants that had not committed a violent crime or presented a serious security threat. Instead, a broad approach to immigration enforcement that targets not only serious criminal offenders and security threats, but any undocumented individual was adopted. The powers of individual immigration law enforcement officers to apprehend and begin removal proceedings for immigration law violators were also expanded by the February memo. It is possible that the tougher stance taken by the Trump administration on enforcement is deterring some migrants from attempting to cross the border without documentation. Nonetheless, as we have written before, apprehensions are an imprecise measure and may not offer a complete picture of what is happening at the border.

It is possible that the tougher stance taken by the Trump administration is deterring some migrants… Nonetheless, apprehenesions may not offer a complete picture of what is happening at the border.

Latin American Economy. Latin American economies are expected to grow in 2017 after a contractionary 2016, a possible contributing factor to the large spike in apprehensions last year as more people came north in search of work. Central America as a whole grew by about 3 percent in the first quarter of 2017, an encouraging sign. An improvement for Latin American economies would likely result in a decrease in attempted border crossings, especially when coupled with the enhanced enforcement efforts expected under the Trump administration. Leading sources of undocumented immigrants to the United States include Guatemala and Honduras, both of which are expected to grow at over 3 percent in 2017. El Salvador is also a leading source of undocumented immigrants and is expected to grow at around 2 percent. Continued economic growth and an expected rise in commodities prices are likely to be reflected in lower levels of attempted migration to the United States from the region as conditions improve. 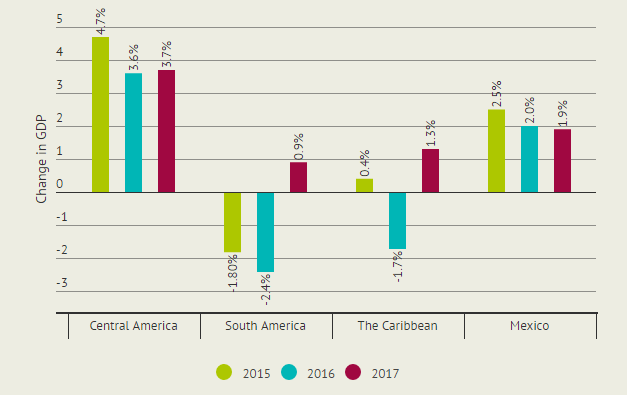 Source:
Americas Society/Council of the Americas

Settling in Mexico. As the number of immigrants attempting to enter the United States plummets, refugees fleeing violence in Central America have increasingly found asylum in Mexico. The United Nations is reporting that applications for refugee status in Mexico have increased 156 percent in 2016. Between November 2016 and March 2017, 5,421 asylum applications were filed, when only 2,148 applications had been filed in the same period in 2015 and 2016. For many fleeing the nations of the Northern Triangle?El Salvador, Guatemala, and Honduras?Mexico is seen as an adequately safe option when faced with the increased scrutiny on border security put forward by the Trump administration.

It appears the four-month downturn in apprehensions that began in January has come to an end in May.


It appears the four-month downturn in apprehensions that began in January has come to an end in May. New enforcement priorities are still being enacted, which will continually impact the flow of migrants attempting to cross the border. The uncertainty surrounding the president’s call for the construction of a border wall and the hiring of thousands of new Border Patrol agents could potentially work as a deterrent to discourage future migration flows. For the time being, however, Congress will not be funding wall construction in FY2017, although funding has been appropriated to hire more Border Patrol and Immigration and Customs Enforcement agents. Positive expectations for Latin American economic growth in 2017 will undoubtedly have an impact on immigration flows as well. Increasingly, Central American migrants have been settling in Mexico, rather than continuing north to the United States, thereby contributing to lower apprehension numbers. As experts have noted, there is not enough information to present a definitive explanation of what is happening at the border, but the increase in May does follow historical precedent.