The latest U.S. Customs and Border Protection (CBP) data show that apprehensions of Central American children and families at the southern border so far this fiscal year are double the total over the same period in FY 2015. Between October 2015 and July of this year, over 107,000 unaccompanied children (UC) and individuals in family units were apprehended (Figure 1), compared to 59,000 in FY 2015. The children and families being apprehended continue to be almost exclusively from the Northern Triangle countries of El Salvador, Honduras, and Guatemala. The continuing flow of Central American migrants prompted the administration to undertake additional efforts to stem the flow, including removal operations earlier this year and a recent expansion of the in-country refugee processing program for the region. 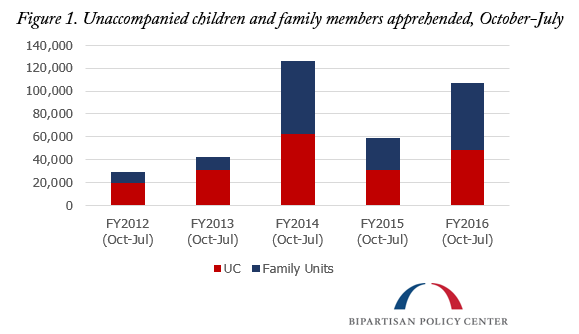 Monthly Apprehensions. The typical ebb and flow of migration patterns throughout a year usually consist of a surge in apprehensions in spring and early summer and a decrease at the peak of summer in July and August. However, in FY 2015, UC and family member apprehensions actually increased by 25 percent between June and September. In fact, except for a small downturn between May and June of 2015 for UC, apprehensions for both groups increased between January and the end of the FY in September. After the unseasonable surge last year, the White House acknowledged that the increase was “surprising” and “concerning.”

Children and families being apprehended continue to be almost exclusively from the Northern Triangle countries of El Salvador, Honduras, and Guatemala.

Mirroring the irregular migration pattern seen during FY 2015, apprehensions for both unaccompanied children and families saw an increase in July of this year. After a slight decrease from 6,800 in May to 6,600 in June, apprehensions of family members climbed again to nearly 7,600 in July (Figure 2). This fiscal year’s total of 58,720 family members is double the number apprehended during the same period in FY2015, when 29,406 individuals were apprehended, and slightly less than the FY2014 total of 62,848 apprehensions. 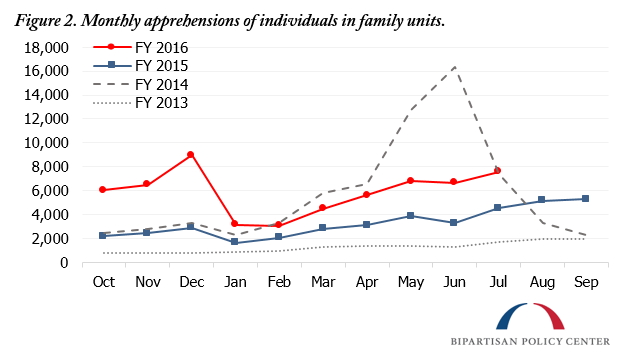 Similarly, apprehensions of unaccompanied children increased from 4,800 in June to over 5,000 the following month (Figure 3). With two months to go in the fiscal year, the total number of UC apprehensions stands at 48,311, a 57 percent increase from FY 2015’s 38,847 apprehensions over the same time period and lower than the nearly 63,000 apprehended in FY 2014. Each monthly apprehension total in FY 2016 for both families and children has been higher than any one-month period during FY2015. 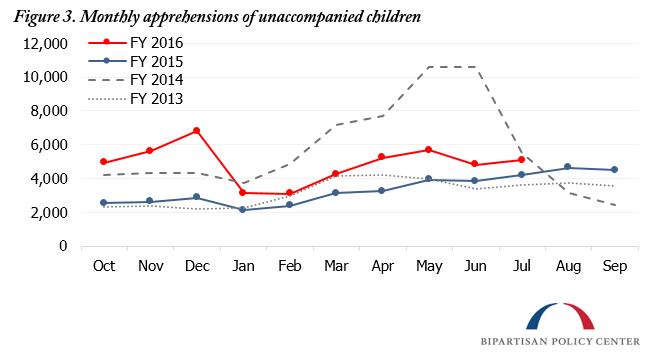 Responding to Unpredictable and Shifting Migration Patterns. The summer surge of 2014 overwhelmed border authorities and processes and surfaced serious questions about the shortcomings of the immigration enforcement system. Since then, the atypical migration patterns have created unpredictability that continues to challenge the Department of Homeland Security’s (DHS) ability to stem and predict future trends. As we have written before, part of the volatility of the flow and unseasonable migration patterns are due to the specific nature of this migration event and the dire circumstances in these migrants’ home countries. In 2015, for example, El Salvador had the highest homicide rate in the world, and the available numbers in 2016 show and even greater increase over the previous year.

This fiscal year’s total of 58,720 family members is double the number apprehended during the same period in FY2015.

The Obama administration has enacted several measures since 2014 to attempt to stem and deter the flow, including increased use of family detention facilities, collaboration with Mexico to increase their enforcement, and a public awareness campaign in Central America to undercut the rumors spread by traffickers of permisos that would allow migrants to stay in the United States. Earlier this year, DHS Secretary Jeh Johnson also announced stepped up interior enforcement actions across the country to remove Central American adults who entered with children and have no claim to asylum.

CAM and Refugee Program. Most recently, the administration announced an expansion of the in-country refugee/parole processing program for Central American minors known as “CAM”, which aims to provide an alternative to undertaking the journey north to the U.S. border. The program, which began accepting application in December of 2014, originally allowed “qualifying parents” who are lawfully residing in the United States to request access to the U.S. Refugee Admissions Program for their “qualifying children” residing in the Northern Triangle. The child must be unmarried and under the age of 21 and the “qualifying parent” can be any individual who is at least 18 years old and is lawfully present in the United States in one of the following seven categories: Permanent Resident Status; Temporary Protected Status; Parolee Deferred Action for Childhood Arrivals (DACA); Deferred Action (non-DACA); Deferred Enforced Departure; and Withholding of Removal.

While public awareness of the program is beginning to increase, the lengthy application process, including a mandatory DNA exam, have restricted the number of applicants. According to DHS, the program has received more than 9,500 applications to date; however, only 144 minors have entered the United States through the program. In an effort to expand access to the program?and potentially address the high number of family units migrating?DHS announced that it would consider additional categories of applicants in the three nations to be applied for: sons and daughters of a U.S.-based lawfully-present parent who are over 21 years old; the in-country biological parent of the qualified children; and caregivers of qualified children who are also related to the U.S.-based parents.

In addition, DHS announced that it plans to work with the United Nations High Commissioner for Refugees (UNHCR) and the International Organization for Migration to expand access to the U.S. Refugee Program for Central Americans fleeing violence. The United States will pre-screen applicants and transfer those in need of immediate protection to Costa Rica, which has entered into a “protection transfer arrangement” with UNHCR, before undergoing the full refugee process and resettled in the United States or a third country. All others will be allowed to be considered through an in-country referral program.

The continued increase in apprehensions of Central American children and families to the U.S. border have reflected a larger fundamental shift in migration to the United States.

Conclusion. The continued increase in apprehensions of Central American children and families to the U.S. border have reflected (if not partly been responsible for) a larger fundamental shift in migration to the United States in the past few years. While Mexicans have typically represented the vast majority of border crossers, there has been a large increase in the percentage of immigrants apprehended at the border from countries “other than Mexico.” In fact, FY 2014 was the first year in history that Mexicans did not make up the majority of migrants apprehended at the U.S.-Mexico border. While DHS does not consistently breakdown the nationality of apprehended individuals beyond “Mexican” versus “Other than Mexican,” apprehension statistics on unaccompanied children and families, as well as immigration court backlog cases by nationality, indicate that the increase in “other than Mexican” is primarily due to the continuing flow of Central American migrants. This shift could have significant implications on our enforcement resources and the ability to process and handle arrivals efficiently and fairly through immigration court and border systems more accustomed to dealing with individuals from neighboring Mexico.