From its very beginning, the North American Free Trade Agreement (NAFTA) has been a source of controversy and the subject of expansive claims about its benefits and negative impacts on the American economy and workers alike. Assessing the truth of those claims is difficult and complex, largely because the changes directly attributable to NAFTA coincided with numerous other unrelated shifts taking place in the global economy.

For some sectors of the U.S. economy the costs and benefits of the agreement are easier to unpack. For example, for most of the agriculture sector NAFTA has been a major success as U.S. exports have grown significantly. Similarly, for the U.S. service industry, NAFTA opened two large markets?U.S. services exports have grown significantly and the United States runs a large trade surplus in services with both Canada and Mexico.

For other parts of the U.S. economy the impact is less clear. U.S. companies have expanded manufacturing operations in Mexico and now export more products to the U.S. market from those factories, usually at lower cost to U.S. consumers. While the shift of manufacturing operations to Mexico likely had some impact on U.S. employment, it is difficult to conclude that any of those lost jobs would have remained in the United States absent NAFTA. Other economic developments could have moved those jobs to other countries, jobs could have been lost to increased automation, or without trade with Canada and Mexico those jobs might never have existed.

“Overall, NAFTA has had a small but positive impact on the U.S. economy, resulting in higher economic growth and employment than there otherwise would have been.”

On balance, the wealth of economic analysis on the impact of NAFTA on the United States generally finds the following: 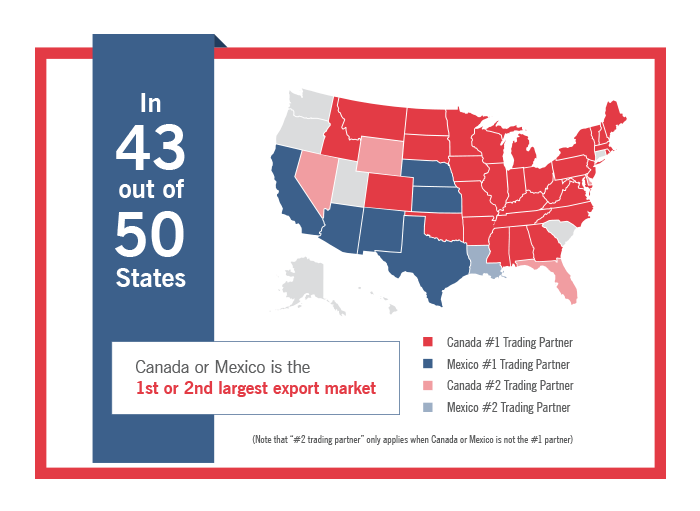 What’s next for NAFTA?