This post is part of The Next Agenda, a series that explores the main policy challenges facing the next Congress and presidential administration on issues from immigration and infrastructure to economics and energy. Check back regularly for future installments.

Despite the polarizing and deeply personal rhetoric of this campaign season, infrastructure was one issue that resonated with supporters of both presidential candidates. Exit polls on Election Night showed that economic insecurity weighed on voters’ minds, and infrastructure investments could be key to addressing those concerns.

With the promise of faster commutes, more reliable drinking water, and?importantly?improved job and economic growth, both sides of the aisle in Congress and the new administration have taken notice, quickly making fixing America’s infrastructure a major post-election priority.

America’s infrastructure challenges are well-documented and deserve this bipartisan focus. 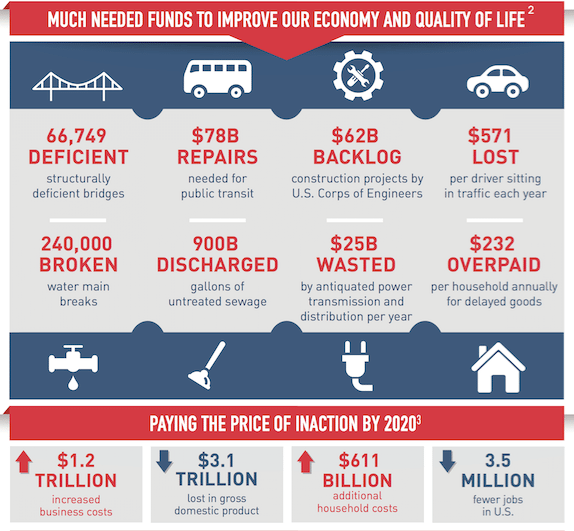 Trump’s advisors have been proponents of public-private partnerships and recently floated the possibility of an infrastructure bank.

The attention given to infrastructure by President-elect Donald Trump, both as a candidate and now during the transition, suggests that his White House will push for action on this issue, even if Congress’s attention pivots. What might a Trump infrastructure proposal look like? During the campaign, his advisors suggested using tax credits to attract $1 trillion in private equity for infrastructure. His transition team’s website calls for an investment of $550 billion. However, this proposal only mentions transportation, with no details on other critical needs like safe drinking water. In the past, President-elect Trump’s advisors have been proponents of public-private partnerships and recently floated the possibility of an infrastructure bank, which had been supported by Secretary Hillary Clinton.

It is clear that the president-elect’s approach to infrastructure is still evolving. Yet one thing seems certain: private capital will be a significant component of his overall plan. But, unless major changes are made to the way we develop infrastructure projects, any plan to attract a significant amount of private capital to the United States will fail to achieve the desired result. To make such a plan work, these five steps must be taken, based on the New American Model for Investing in Infrastructure proposed by the Bipartisan Policy Center’s Executive Council on Infrastructure:

1. Empower states and localities. Many states and localities today lack the legal authority and expertise to enter into partnerships with the private sector for infrastructure financing and delivery. BPC’s model seeks to empower communities?through broad enabling legislation, better analytical tools, and other incentives?to utilize all options for meeting their infrastructure needs. There are a wide range of partnership models that have been successfully used to deliver a variety of infrastructure projects including light rail, water treatment systems, and freeway lighting. Federal leadership and support for capacity-building efforts are needed to empower states and localities to engage in the full range of partnership options with the private sector.

2. Address our broad needs. All parts of our infrastructure systems play a role in supporting economic growth and quality of life. Federal action on infrastructure must address urgent and ongoing needs in water supply and quality; surface, air, and maritime transportation; and other economic and social infrastructure such as broadband, energy, schools, and hospitals.

3. Build a project pipeline. The U.S. does not have the framework in place to absorb new sources of private investment on a wide scale. We lack a project pipeline?an ongoing, diverse mix of projects with the characteristics investors are looking for. These characteristics include not only a return on investment, but also broad political support (to avoid the risk of a project being canceled after a change in leadership) and a clear schedule for governmental reviews. The new administration should directly engage public agencies at all levels of government to develop a pipeline of projects that will attract private capital, expertise, and innovation.

4. Prioritize process reforms. The new model calls for full and transparent accounting of projects’ life-cycle costs, which will facilitate sharing the long-term costs and risks of infrastructure investment between the public and private sectors. It also calls for objective analysis of project delivery options, including public-private partnerships, and for accelerated permitting and review. Prioritizing these process reforms are a necessary step in addressing the key barriers that prevent more robust private investment in U.S. infrastructure, while improving project delivery and providing a greater value to public users of that infrastructure.

Many states and localities lack the legal authority and expertise to enter into partnerships with the private sector.

5. Resolve the funding question. While enthusiasm for an infrastructure package exists across party lines, deep divisions remain on the question of how it could be paid for. Some infrastructure advocates have suggested using repatriated revenue from corporate tax reform as an offset for infrastructure spending, while others have supported increases in gasoline or oil taxes. Congress passed a major transportation bill just under a year ago, deferring the insolvency of the Highway Trust Fund until fiscal year 2020, which in many members’ minds takes the issue off the table until then. This would be a core policy error: Private capital does not eliminate the need for robust public investment. Any serious infrastructure proposal must find long-term, stable funding for federal infrastructure programs, including but not limited to the Highway Trust Fund.

Bringing additional private capital to U.S. infrastructure projects does not obviate the need for robust, stable, and long-term public infrastructure funding. Private capital can’t do it all?but it can certainly do more than it is doing today. If the goal of the new president is rapid bipartisan action on a plan to address America’s infrastructure needs, BPC’s model provides the best path forward.

How Colorado Is Modernizing Its Infrastructure