Since at least November 2014, Iran has been in violation of a key term of the interim agreement it entered into with the United States and other world powers, known as the Joint Plan of Action (JPOA). In June 2015, the New York Times picked up on this fact and published a story, earning fierce push back from the Obama administration, about how this noncompliance might complicate attempts to negotiate a final deal. Now, a new report from the International Atomic Energy Agency is being described as showing that, according to AP, “Iran has met [this] key commitment.” That, however, is not the case.

A close reading of what the JPOA requires and what Iran has actually done, shows that Iran has not yet fulfilled its obligations under the arrangement. The new IAEA report says that Iran had only begun the process of converting some of its stock of enriched uranium into uranium oxide as of the June 30, 2015 termination of the JPOA, but the agreement required it to complete, not just initiate, the conversion process.

Described by the White House as “freezing” Iran’s nuclear program, the JPOA was designed to ensure that Iran did not get any closer to a nuclear weapons capability as negotiations toward a final deal continued. Thus, one of its main provisions was meant to cap the amount of 3.5 percent enriched uranium hexafluoride (UF6)?a potential feedstock for producing fissile material for a nuclear device?that Iran could stockpile during the talks. The deal, however, did not prohibit Iran from producing 3.5 percent enriched UF6.

Instead, the JPOA required Iran to convert whatever UF6 it enriched during the deal’s term into another substance, uranium oxide (UO2), which was more difficult to turn into fissile material. This, in turn, required Iran to construct a new facility where this processing could happen. So, under the JPOA Iran agreed to turn whatever 3.5 percent enriched UF6 its centrifuges made into UO2, as soon as the new plant was ready. Specifically, the text reads:

The required plant was not completed until May 2014, five months after JPOA went into effect, and did not begin operations until July 2014, at the very end of the deal’s initial six-month period. It was August before 1,500 kilograms of 3.5 percent enriched UF6 were converted into UO2, after the first six months had elapsed. Between August 2014 and June 2015, however, no further conversion was undertaken by Iran, although its centrifuges kept on spinning, producing 3.5 percent enriched UF6. Thus, by the time of the June New York Times article, Iran had produced an additional nearly three tons of 3.5 percent enriched UF6 that, under JPOA, had to be turned into UO2, but instead were sitting in Iran’s stockpile of nuclear materials.

The Obama administration was not particularly perturbed by this fact since, according to their interpretation, JPOA only required Iran to fully convert its UF6 stockpile by the end of the deal’s term. As State Department Senior Advisor Marie Harf put it, “They can go up and down as long as at the end of a fixed date they are back down below a number.” This interpretation seems suspect.

First, the administration’s characterization of the JPOA as capping or halting Iran’s progress toward a nuclear capability does not seem compatible with Harf’s assertion that fluctuation in its stockpile of enriched uranium is acceptable. After the JPOA was struck, Under Secretary of State Wendy Sherman testified before the Senate that: “What this initial plan does is help ensure that Iran’s nuclear program cannot advance?this initial step will immediately: halt progress of the Iranian nuclear program. [emphasis added]” But Iran’s stockpile going “up and down,” as Harf put it, constitutes advance and progress in its nuclear program. The roughly 3,000 kilograms of 3.5 percent enriched UF6 that Iran had produced and not converted into UO2 over the past 10 months is roughly equal to the amount of enriched uranium that would be needed to produce fuel for one nuclear weapon. That seems like a significant “advance” in their program.

Second, the actual text of the JPOA does not support the administration’s interpretation that fluctuation is permitted. The deal specifically says “Iran has decided to convert to oxide UF6 newly enriched up to 5% during the 6 month period.” The key word here is “during.” It is not “by the end of” or “no later than,” which would each suggest that compliance with this provision would be judged solely once the deal’s term concludes. Instead, the text uses “during,” which indicates that the conversion process was meant to be ongoing throughout the entirety of the deal and contemporaneously with the actual production of the UF6.

Thus, despite the administration’s assertions that Iran was complying with the JPOA, it has in fact been in breach for much of the deal’s duration. Regardless of this fact, now that the JPOA’s June 30 deadline has passed, a new IAEA report seems to suggest that Iran has finally come into compliance with this condition of the JPOA. According to the AP, “the confidential International Atomic Energy Agency report said more than four tons of the enriched uranium had been fed into a pipeline that ends with conversion of it into oxide?[and] the United States was satisfied that Iran had met its commitments to reduce the amount of enriched uranium it has stored.” This, too, is an inaccurate and superficial reading of both the new IAEA report and the JPOA.

The July 1 IAEA report on “Status of Iran’s Nuclear Programme in relation to the Joint Plan of Action,” states that Iran “fed 4304 kg of UF6 enriched up to 5% U-235 into the conversion process at the Enriched UO2 Powder Plant (EUPP) for conversion into uranium oxide.” Given that Iran, during the nearly 18 months of the JPOA, produced 4,293 kilograms of 3.5 percent enriched UF6, it would seem that it has, as required, gotten rid of its excess stockpile.

However, comparing what Iran has actually done with what it was specifically obliged to do shows a major discrepancy. Under JPOA, Iran was required “to convert to oxide UF6 newly enriched up to 5%.” But what it has actually done is only “fed 4304 kg of UF6 enriched up to 5% U-235 into the conversion process.” Iran was supposed to fully complete the conversion process, all it has done so far is begin it. This is borne out later in the footnotes of the IAEA report, which indicate that “260 kg of uranium in the form of UO2 enriched up to 5% U-235 had been produced since the plant started operation,” Yet, 4,304 kilograms of UF6 should be expected to produce roughly 2,860 kilograms of UO2. Iran, thus, is still roughly 2,600 kilograms of U02 shy of meeting its JPOA obligations. 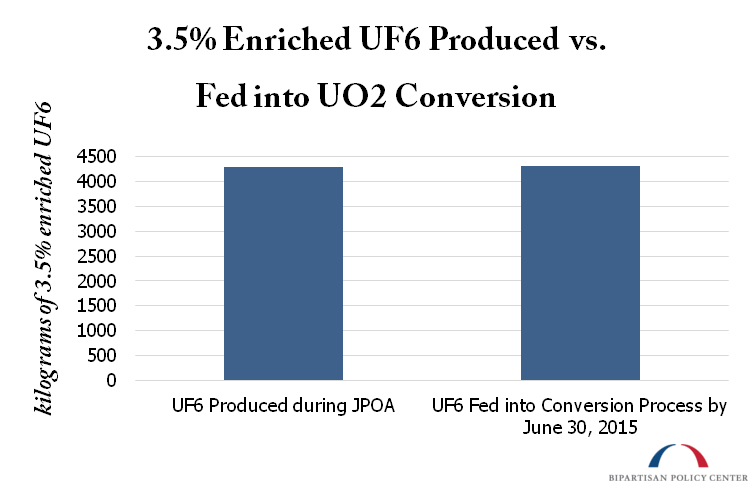 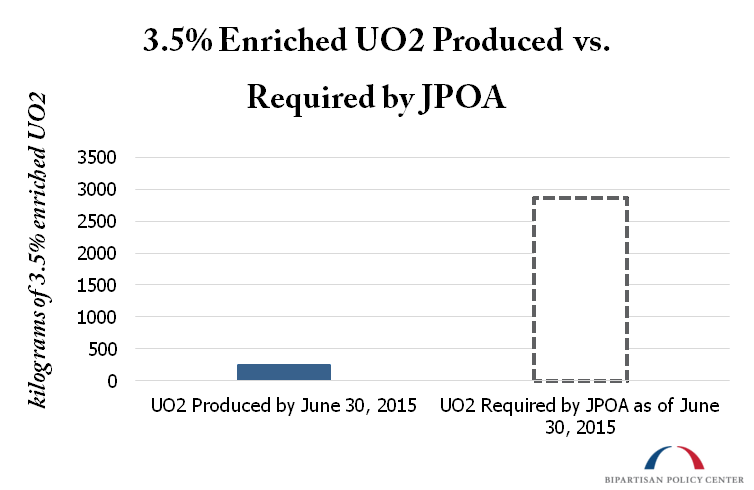 The AP story caught on to this: “The report indicated that only several hundred pounds of the oxide that is the end product had been made.” This apparently does not bother the administration, since “a U.S. official told the AP the rest of the enriched uranium in the pipeline has been transformed into another form of the oxide that would be even more difficult to reconvert into enriched uranium.”

But the requirement of JPOA was not simply to turn UF6 into any other substance that was difficult to reconvert. It was specifically spelled out that Iran was required to turn UF6 into UO2. Failure to do so is, strictly interpreted, failure to comply with the JPOA. And failure to comply with the JPOA is crucial because it signals what Iran’s behavior is likely to be under a comprehensive deal, if one can be cobbled together in the next couple of days: attempting to find loopholes and wiggle room it can exploit to cheat on its obligations.

More worrisome is the lesson that Iran has now likely learned from its experience with the JPOA. Rather than hold Iran’s feet to the fire, the United States is willing to continually reinterpret specific provisions?reading “during” to mean “at the end of,” turning “convert to UO2” into “convert to any other substance”?and look the other way. It is perhaps no surprise, then, that Iran’s Supreme Leader Ali Khamenei observed recently that, “our opposing side – the current administration of America and decision-makers in that country – need these negotiations.”

What’s the Deal? Divergent Descriptions of the Iran Nuclear Agreement