The latest report1 on Iran’s nuclear program by the International Atomic Energy Agency (IAEA) suggests that Iran continues to test the boundaries of the current diplomatic process to address its nuclear program. Tehran might be cooperative in talks with the P5+1 but is thwarting attempts by the IAEA to reveal the extent and nature of Iran’s past nuclear work and safeguard its ongoing nuclear activities. Moreover, although Iran is required to cap its production of 3.5 percent enriched uranium durin the interim deal, known as the “Joint Plan of Action” (JPA), it maintains a stockpile significantly larger than when the JPA went into effect.

As discussed in a previous analyses, although much attention has been focused on negotiations between Iran and the P5+1 countries there has also been a parallel diplomatic track going on between Iran and the IAEA. Called the “Framework for Cooperation” (FC), the IAEA’s “approach [is] aimed at ensuring the exclusively peaceful nature of Iran’s nuclear programme” and gaining a better understanding of Iran’s past nuclear research, particularly on the so-called possible military dimension (PMD). Under the FC, the IAEA and Iran agreed to a set agenda of IAEA concerns for Iran to address and a timeline for doing so. Since November 2013, the FC has gone through three rounds, with a total of 17 issues raised: five in the first round, seven in the second, and five in the third.

Yet, two of those issues remain unresolved since September 2014. Both of these unresolved issues have to do with Iran’s past nuclear research: explaining Iran’s experimenting withhigh explosives and researching neutron transport calculations. However, the fourteen issues on which Iran has been compliantare unrelated to the possible military dimension of its nuclear program, focusing instead on current and ongoing activities.

In the almost half year since the September IAEA report, nothing has changed on addressing the outstanding items. As laid out in the most recent reports, despite multiple meetings between Iran and the IAEA, no progress has been made on the outstanding items. Iranian negotiators have not been forthcoming on providing a civilian justification for their work in the areas in question.

In December 2014, Iran announced that it would build in the next year a second nuclear reactor at its Busher facility?where it currently operates an electricity-generating light water reactor. Although Iran is legally obligated to share design plans with the IAEA as soon as the decision is made to construct any new nuclear facility, it has refused to provide those plans and essentially told the IAEA it would comply with its safeguards obligations when and how it feels inclined to do so.

By signing onto the Treaty on the Non-Proliferation of Nuclear Weapons in 1968, Iran became legally obligated to execute a Safeguards Agreement with the IAEA. The Agreement, which Iran signed in 1973, granted the IAEA the right to monitor and verify Iranian nuclear activity and compliance with the NPT. This included a requirement that states give the IAEA 180 days advance notice before they begin construction on a new nuclear facility. This was designed to give the IAEA enough time to analyze the facility’s plans and come up with a safeguards regime for it. In the 1990’s the IAEA realized that six months was not enough time and updated the term to require notification as soon as a state decides to construct a new facility.

Even though it had agreed to this change to its Safeguards Agreement, in 2007 Iran notified the IAEA it would no longer honor it. Thus, when the IAEA wrote to Iran seeking design information about the new nuclear reactor announced in December 2014, Iran refused, replying only that, “more information, when available, will be provided to the Agency in due time.”

Such unilateral decisions about which parts of the Safeguards Agreement to comply with are clearly illegal. The United Nations Security Council, in resolution 1929, “reaffirms that?Iran’s Safeguards Agreement?cannot be amended or changed unilaterally by Iran, and notes that there is no mechanism in the Agreement for the suspension of any of the provisions in the Subsidiary Arrangement.” Yet, Iran continues to ignore this legal obligation, much like it does the requirement, contained in the same UNSCR resolution as well as four others, that it “suspend all enrichment-related activities” until it can instill “confidence in the exclusively peaceful purpose of its nuclear programme.”

The JPA, initially negotiated in November 2013 and implemented on January 20, 2014, was meant to be a six-month confidence building measure, designed to give both sides time to negotiate a comprehensive deal without the pressure of additional Iranian nuclear advances or international sanctions. That window proved insufficient and, in July 2014 and again November 2014, the P5+1 and Iran announced extensions of the JPA, now slated to expire on June 30, 2015. Yet, it appears that Iran has failed to comply with a term of the meant to ensure that its stockpile of 3.5 percent enriched uranium did not grow at all during the deal’s term.

Specifically, Iran agreed to “convert to oxide UF6 newly enriched up to 5percent during the 6 month period.” Whereas UF6 is a gaseous uranium compound used for enrichment, uranium oxide (or UO2) is a metallic compound used in nuclear fuel rods. Although UO2 can be turned back into UF6 and enriched further that step adds additional time to a potential breakout attempt.

In order to comply with this provision, Iran had to build a new facility?the Enriched UO2 Powder Plant (EUPP)?to handle the conversion. The plant was not completed until May 2014, five months after JPA went into effect, did not begin operations until July 2014, at the very end of the initial the period, and it was August before 1,500 kilograms of 3.5 percent enriched UF6 were not converted into UO2, after the first six months had elapsed.

Iran’s pattern of minor infractions and constant unilateral interpretation of its legal obligations has clearly annoyed the IAEA. Several times in its latest report, the IAEA repeats that Iran “has not provided any explanations” for its PMD work, that IAEA safeguards obligations are “legally binding,” and that “full implementation of Iran’s obligations is needed in order to ensure international confidence in the exclusively peaceful nature of its nuclear programme.”

Though it may seem as if the IAEA is quibbling over minor issues?past research and plans for facilities that may never be constructed? with little bearing on Iran’s current nuclear breakout capacity, Iran’s behavior impacts the ability to reach a comprehensive agreement that would prevent a nuclear-capable Iran and, were there to be such a deal, sets a precedent for how Iran would approach it. The less willing Iran is to come clean about its previous research into nuclear weapons technology, the less confident the P5+1 can be that Iran is negotiating or entering into a nuclear deal in good faith. The less the IAEA knows about Iran’s nuclear work, the less effective any additional verification measures adopted under a comprehensive agreement will be. And the more often Iran is able to renege on its legal commitments, the more it sets the expectation that such seemingly small violations are run-of-the-mill. And the greater the expectation for transgressions, the greater tolerance there is for them.

For this reason, the test of any comprehensive deal will be the ability to detect and respond to any similar transgressions of that agreement. As laid out, however, by the Bipartisan Policy Center’s (BPC) Iran Task Force, an acceptable comprehensive agreement with Iran will require, no matter the contents of a deal, and no matter how long its duration, on continued enforcement and vigilance from the United States and its partners. Vigilance will come, in part, from monitoring Iran’s compliance, and will require continued support for the IAEA’s inspections efforts. It will also be incumbent upon the international community to demonstrate credibly to Iran’s leaders that there will be consequences if they attempt renege. 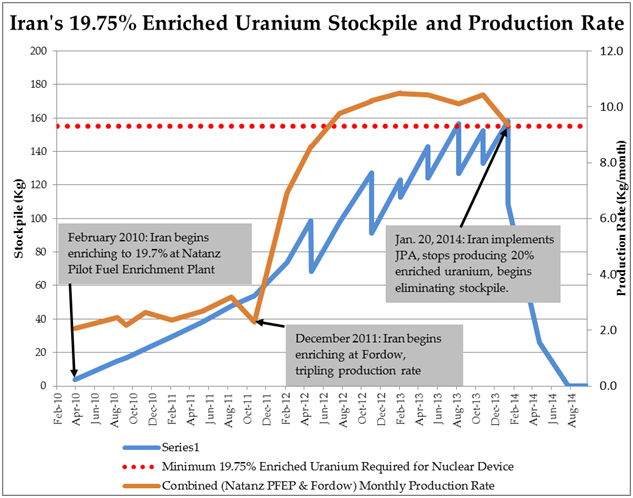 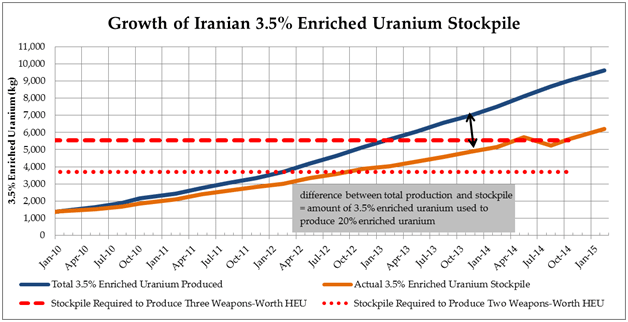 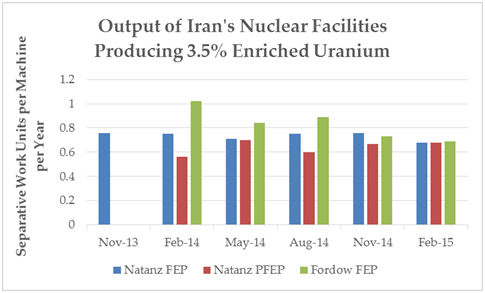 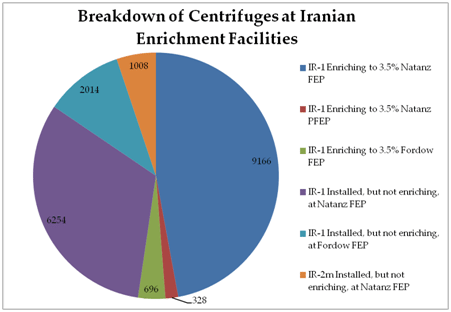 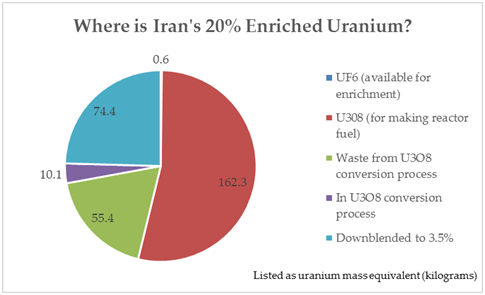 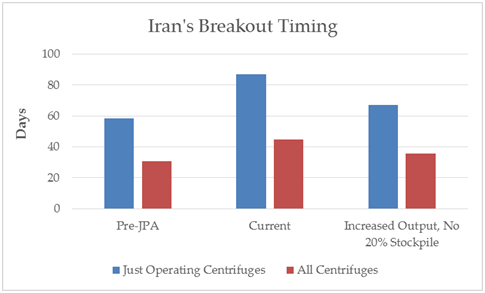 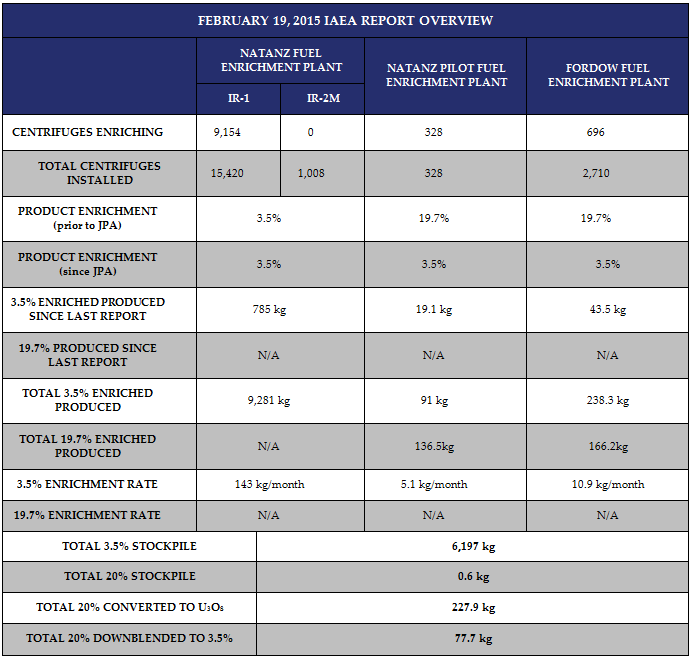 1 As of latest IAEA report: “Implementation of the NPT Safeguards Agreement and relevant provisions of Security Council resolutions in the Islamic Republic of Iran,” Board of Governors Report, International Atomic Energy Agency, February 20, 2015 (GOV/2015/15)

2
This calculation assumes Iran uses a three-step batch recycling process to produce highly enriched uranium for a nuclear weapon and is based upon the work of Greg Jones at the Nonproliferation Policy Education Center. Both scenarios assume the use of the Natanz Fuel Enrichment Plant at its current production rate and drawing upon Iran’s current stockpiles of 3.5% and 20% enriched uranium. For a more detailed explanation, see here.

State of the Union Against a Nuclear Iran

Congress and the White House Need Each Other on Iran