In his address to Congress on February 28, President Donald Trump called for the adoption of a merit-based immigration system. Merit-based systems, also called point-based systems, credit prospective immigrants who have specific characteristics that are found desirable, including education, specialized skill sets, employment experience, language proficiency, and age. The president claims that a merit-based system would save the government money and raise wages for U.S. workers. He cited the Australian and Canadian systems as potential models. The adoption of a merit-based system that emphasizes education and skill would represent a significant shift in U.S. immigration policy that could have economic and demographic impacts and require a political flexibility around immigration policy that the country has historically lacked.

In 1967, Canada was the first country to adopt a merit-based immigration system. The system outlines six selection factors with a corresponding number of points that applicants can accumulate, adding up to a maximum of 100. Applicants can earn up to 25 points for education, 28 points for English and French proficiency, 15 points for work experience, 12 points for prime working age, ten points if the applicant has a job offer, and ten points for the potential adaptability of their family, which is calculated based on the family members’ language proficiency, work experience, and family ties to Canada. An applicant has to accumulate at least 67 points to qualify.

Both Canada and Australia have faced challenges with their supply-driven points-based systems, which allow foreign applicants to apply to migrate without any advanced domestic sponsorship from the destination country. In particular, there have been problems with immigrant underemployment and unemployment after arrival, since having a job offer in advance is not required. For example, the unemployment rate for immigrants in Canada is higher on average than for native-born Canadians (6.9 percent compared to and 5.5 percent). Among recent immigrants (less than five years), the unemployment rate is over 10 percent. (In contrast, the foreign-born unemployment rate in the United States, which requires most immigrants to have a pre-existing employer or family sponsor, is 4.9 percent, compared to 5.4 percent for the native born). Recently-arrived higher-skilled immigrants also experience challenges entering the labor force, often because they have a hard time finding work that matches their skill level or they need to spend time upgrading their credentials.[i]

To address immigrant underemployment and unemployment, Canada has recently altered the points scale to favor younger applicants and persons with greater language proficiency, who have an easier time finding employment. Australia, which faced similar issues, has also moved to a hybrid system that emphasizes domestic demand and includes both “sponsored” immigrants and points-based “independent” immigrants.

Moving towards a merit-based immigration system that prioritizes skills and education would represent a dramatic shift in priorities.

The United States has historically favored an immigration system focused on family reunification and not on high-skilled or economic immigration. The passage of the Immigration and Nationality Act of 1965 established family reunification as the central principle of the U.S. immigration system. Although the Immigration Act of 1990 increased the number of employment-based immigrants admitted each year, it retained the basic elements and structure of the system set up in 1965. In 2015, nearly 65 percent of those granted lawful permanent resident (LPR) status petitioned for a family-based visa, while only 14 percent of new immigrants were admitted through employment or skills-based petition.

In recent years, merit-based systems have been included in several immigration reform proposals. In 2013, a comprehensive immigration reform bill (S.744) included the introduction of a merit-based system. Despite passing in the Senate 68-to-32, the bill was never introduced in the House. Before S.744, a similar effort failed in 2007. The 2013 bill called for the creation of a two-track “Merit-Based” immigration system (Figure 1).[ii] The first track would have allowed for 120,000 to 250,000 LPRs to be admitted annually, using a formula to assess demand and set a specific cap each year. It also created two tiers for assessing “merit,” each of which would have been awarded half of available visas. Tier 1 applicants would have been awarded points based on education level, employment experience, higher-skilled, high-demand occupations, and entrepreneurship. Tier 2 would have awarded points based on U.S. employment experience and in-demand lower-skilled occupations. Both tiers awarded additional points for similar criteria, such as age, English ability, and familial relationship to citizens.

Although the merit-based program would have admitted almost as many immigrants as the current employment-based preferences in law, it was not meant to replace the employer-sponsored system but rather run alongside it, allowing for a possible test of the merit-based concept.

Moving towards a merit-based immigration system that prioritizes skills and education would represent a dramatic shift in priorities in U.S. immigration policy that would have significant consequences. While high-skilled immigrants do help with labor force gaps, particularly in STEM occupations, and create more jobs through entrepreneurship, immigrants are also critical in filling lesser-skilled jobs. Currently, foreign-born workers are more likely than native-born workers to be employed in lesser-skilled occupations in the United States. (Foreign-born working age persons are also less likely to have completed high school or have some college education.) An immigration system that prioritizes skills over family going forward would not only mean an economic restructuring of the make-up of our foreign-born work force, but it could also have demographic implications. Since the prioritization of family immigration in 1965, immigrants from Latin America and Asia have constituted an increasingly larger share of the immigrant population, rather than Europeans.

New emphasis on economic immigrants could shift the source of immigrants away from Latin America to India, China, and other Asian nations, whose immigrant populations tend to be more highly skilled and educated than other regions. Lastly, merit- and point-based systems usually require political flexibility to frequently adjust the immigration system according to labor demand or other factors. In both Canada and Australia, the government can adjust the points awarded, and even some categories of points, by administrative announcement and without legislative change. Considering the political divisions around immigration in the United States, and that 1990 was the last time the legal immigration system was significantly reformed, it would be difficult to conceive that a system that allowed for periodic reforms and adjustments by the executive branch without input from the legislative branch would be palatable to Congress. 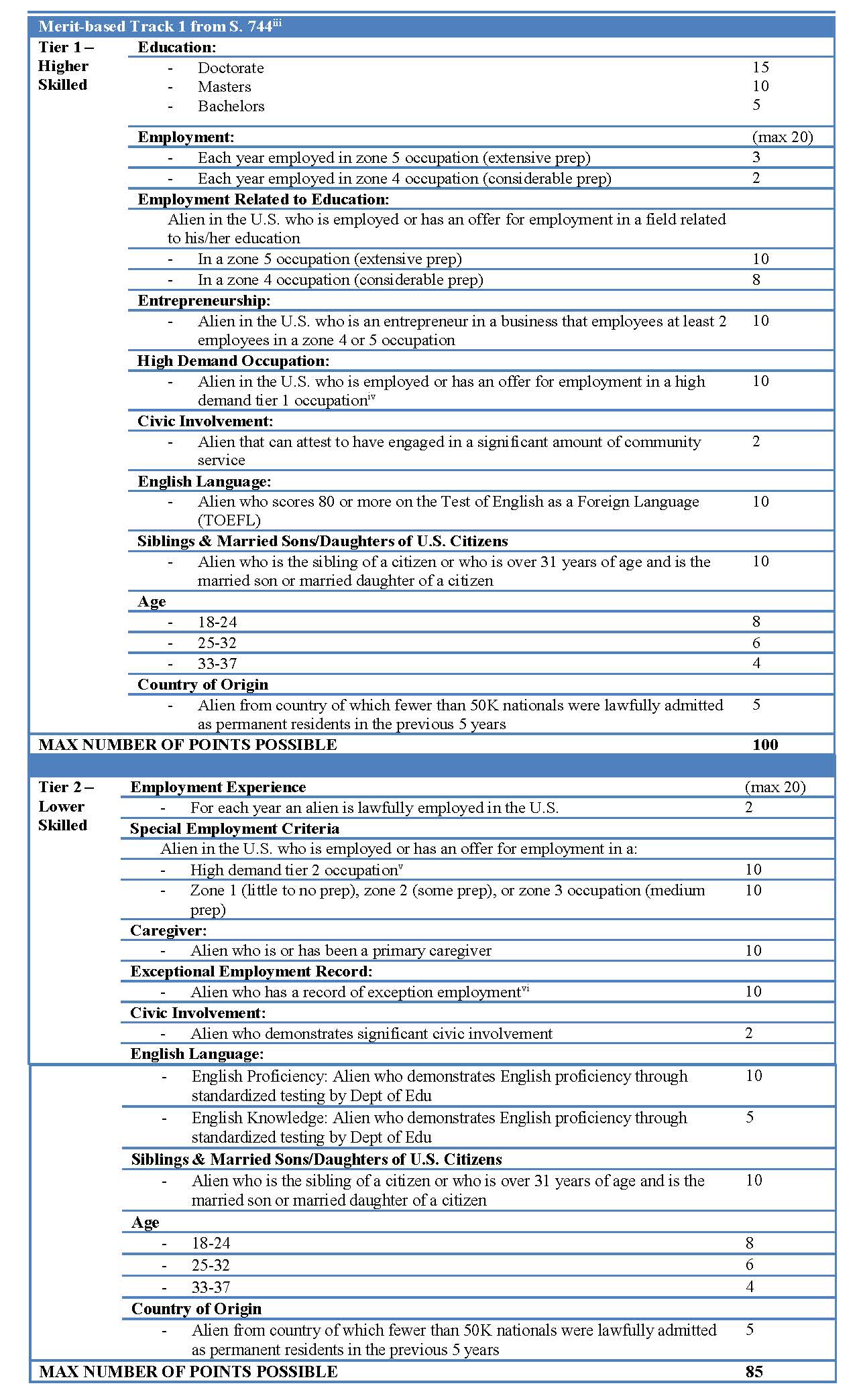 [ii] The second track of the merit-based system was set up to transition immigrants who had previously filed petitions in family and employment categories that would have been eliminated by the bill, and for immigrants in the process of legalizing.

[iii] There was no minimum number of points required to qualify like the Australian and Canadian systems, instead the visas would just go to applicants with the highest number of points.

[iv] High demand tier 1 occupation is defined by S.744 as 1 of the 5 occupations for which the highest number of H1B immigrants were sought to be admitted by employers during the previous fiscal year

[v] High demand tier 2 occupation is defined by S.744 as 1 of the 5 occupations for which the highest number of low-skill positions were sought to become registered positions by employers during the previous year.

[vi] Exceptional employment is determined by factors such as promotions, longevity, changes in occupation from lower job zone to higher job zone, increases in pay, and participation in safety training.

Culprit or Scapegoat? Immigration’s Effect on Employment and Wages