With the recent release of the 2015 Medicare Trustees report, there are growing concerns among consumers that Medicare Part B premiums will be increased for a subset of enrollees. Medicare Part B is one component of traditional Medicare, along with Part A and Part D. Part B covers outpatient expenses, such as physician services, outpatient hospital services, and durable medical equipment, and is funded through general revenues and beneficiary premiums.

Part B premiums are set each fall by the secretary of the U.S. Department of Health and Human Services (HHS). Under current law, the standard Medicare Part B premium is set to cover 25 percent of average Medicare Part B costs for enrollees age 65 and over in a given year.

Based on the Medicare Trustees’ recent projections of Medicare Part B costs for 2016, the standard Part B premium would increase from $104.90 in 2015 to $120.70 in 2016. However, these projections change if there is no COLA for next year. The January 2016 Social Security COLA is calculated based on the annual increase in the Consumer Price Index for Urban Consumers from the 3rd quarter of 2015 compared to the 3rd quarter 2014. Data available through the 2nd quarter of 2015 would suggest no inflation has occurred over the last 12 months. Should this trend continue into the 3rd quarter data, there would be no COLA for Social Security benefits and most Medicare beneficiaries would not see an increase in their Part B premiums. If this occurs, the increase in projected Part B costs would be absorbed by the 30 percent of beneficiaries (and state Medicaid programs) not covered by the hold-harmless provision. Under this scenario, the standard and income-related premiums for this group would increase by about 52 percent from 2015 (see Table 1).

While these projections may be troubling, particularly for the beneficiaries and state governments facing these higher premiums, the estimates are still just that: estimates. HHS will not finalize the 2016 premium amounts until later this year, and inflation conditions could change, but quite frankly this is unlikely. Further, Congress could act to provide a modest increase in the COLA. However, again, this is unlikely. If higher premiums go into effect, this could be limited to one year. If inflation picks up next year, as predicted, the Part B premium would return to a lower level in 2017. Along these lines, the Medicare Trustees estimate a standard Part B premium of $120.70 for 2017. 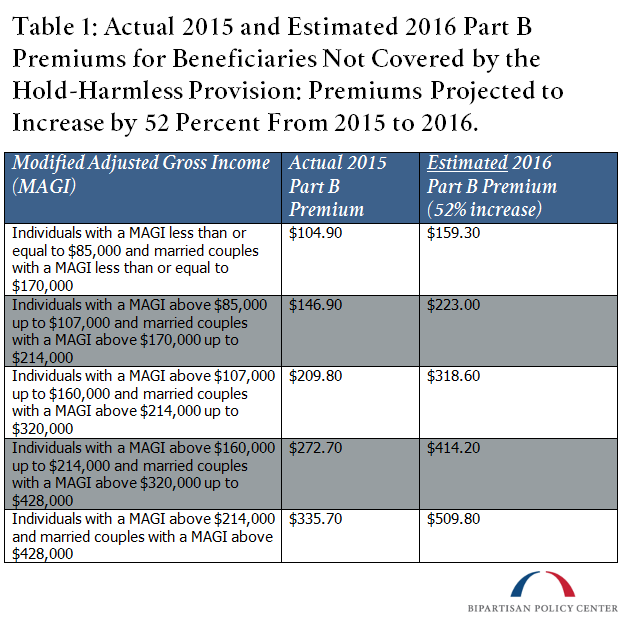 Transitioning from Volume to Value: Accelerating the Shift to Alternative Payment Models

Medicare Networks: A Proposal for the Future of ACOs