After a historic hurricane season, managing and preventing flood damage to homes and infrastructure has become a national priority. As FEMA Administrator Brock Long pointed out in his recent Senate testimony, the United States’ natural disaster response apparatus is in immediate need of reforms. The proposal that Administrator Long outlined included: reforms to simplify and streamline the various disaster recovery programs across the federal government, fixes to the insolvent National Flood Insurance Program (NFIP), expanded workforce development and hiring practices for FEMA (akin to the FBI academy program), and increased support for both state “baseline capabilities” and pre-disaster mitigation.

Each of those reforms deserve serious consideration from Congress, but missing from the list is a solution to one fundamental flaw that kneecaps both mitigation and recovery efforts ? FEMA’s antiquated floodplain maps.

To determine who is most at risk of flooding, FEMA maintains a database of maps that chart the areas susceptible to both 100-year (1 percent chance per year) and 500-year floods. Notably, these 100-year and 500-year categories are not rooted in science, but are the product of a 1973 compromise between the Army Corps of Engineers’ strict standards and the more lax but established local policies. The categories are also based on a hodgepodge of data that was collected anywhere between 1900 and 1960.

From infrastructure to housing, the floodplain maps serve as the foundation for natural disaster planning, management, insurance, and mitigation policies. Today, 5 percent of housing in the U.S. is located within a 100-year floodplain, and the monthly premiums for NFIP’s 4.9 million policies are almost entirely based on the floodplain maps.

The floodplain maps are full of problems. First, the maps vary drastically in age, with some communities still relying on 40-year-old, hand drawn maps. Of the 22,000 communities that FEMA manages flood mapping for, 15 percent have maps that are over 15 years old. As of December 2016, 68 percent of the maps required a restudy or further assessment. Not to mention, as global temperatures continue to rise, the average 100-year floodplain’s size is projected to increase 45 percent by 2100.

Updating these maps is another challenge entirely. Of the maps that are being updated, 12 percent have been placed on hold, with the majority waiting an average of nearly 3 years before making progress. Further complicating the process, FEMA often faces local resistance due to the possibility that a new map may result in increased insurance rates. But with the federal government using an incomplete picture of the nation’s flood risks, the current pool of NFIP’s rates and enrolled populations are unable to cover the cost of a major disaster. 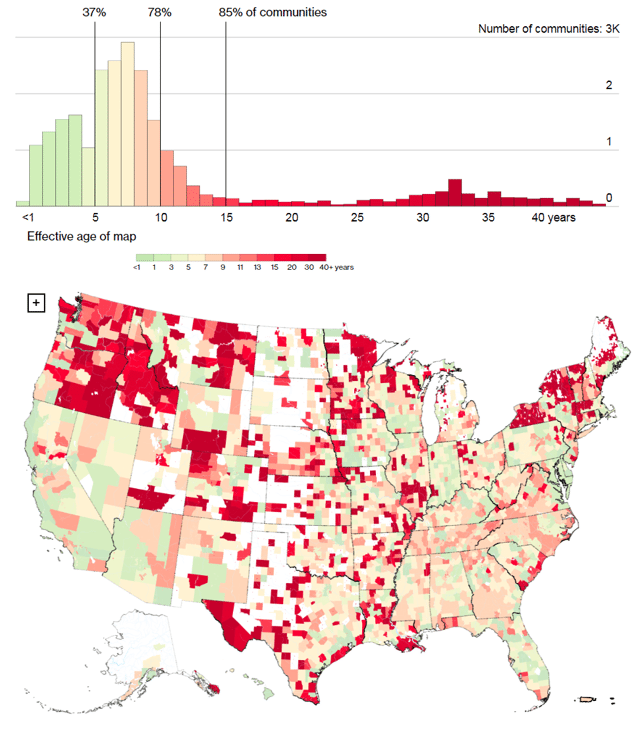 Areas without data do not participate in the NFIP or do not have reliable data. Source: FEMA and Bloomberg.

Unfortunately, age is not the only problem and making all new maps will only go so far. A recent report from the Department of Homeland Security found that, due to lapses in management and oversight of the flood mapping process, FEMA is “unable to assess flood hazard miles to meet its program goal and is not ensuring mapping partner quality…” Concluding that, in FEMA’s current state, it cannot provide the public with an accurate portrayal of their flood risks. In addition to the process and oversight problems, one of the fundamental issues is that the maps are one dimensional, in that they:

As is currently being demonstrated in Houston, these flood maps directly impact local policies. During Hurricane Harvey’s record setting 33 trillion gallons of rain, the floodplain maps missed 75 percent of the affected area. But in a recent ProPublica piece, residents reported being excluded from a local buyout program because they were not located in FEMA’s 100-year floodplain, despite their homes repeatedly flooding. On average, over 25 percent of NFIP claims come from outside of the identified floodplain.

Floodplain Map from before and after Hurricane Sandy

If, as Administrator Long said on Tuesday, “insurance is the first line of defense” for a natural disaster, then floodplain maps are the furthest forward deployment, integral for both predicting and preventing damage. Fortunately, FEMA is well aware of many of the outstanding issues that plague the mapping system. Unfortunately, budget cuts and administrative delays have significantly hindered progress to rectifying these issues. In 2013, the Association of State Floodplain Managers estimated that bringing the entire nation’s maps up-to-date (with advanced metrics) could cost an initial $6 billion, but maintaining the new database would have costs similar to the current system, between $116 and $275 million each year. However, a groundswell in funding for mapping would be a reversal of a longstanding trend. Since the creation of a national Floodplain Mapping program in 1968, Congress has perpetually underfunded federal mapping activities, though targeted efforts have proven successful, such as the as the 6-year, $1.475 billion, initiative to create a digitized database.

In the absence of federal action, state and local leaders can make their own advances by empowering their local floodplain managers, and taking a comprehensive look at their management and recovery policies to certify that infrastructure and residents located outside of the designated floodplains are not excluded. Additionally, an increased investment in stormwater infrastructure can help alleviate both small- and large-scale floods. Several cities, like Chicago and Philadelphia, are currently constructing both “green” and “gray” stormwater infrastructure, and coastal cities, like Miami, are raising roads and installing water mains to prepare neighborhoods for rising sea levels.

Between now and December 8, the NFIP will require congressional reauthorization. There is no shortage of reports with recommendations on how to fix NFIP, and several reauthorizing packages have already been introduced. However, reforms have largely focused on NFIP’s rate setting policies, rather than on updating the maps with models that better predicts the severity of today’s weather events. In the last decade, the program has been woefully outpaced by the record-setting hurricanes, and as OMB Director Mick Mulvaney described, the current structure of rates and premiums is “not fiscally sustainable.”

After a devastating trio of hurricanes hit Texas, Florida, and Puerto Rico, it is easy to see how failing to accurately estimate the risk of a flood has severe humanitarian and fiscal consequences. Congress is currently debating on reforms to create a fair and self-sustaining NFIP, but until FEMA is empowered with a more accurate assessment of flood risks, the insurance program will remain incomplete and reactionary.

Hurricane Harvey and the Critical Importance of Stormwater Infrastructure

Puerto Rico and the Complicated Path to Disaster Recovery