On Friday, August 25, Hurricane Harvey made landfall on the coast of Texas. Within a week, the Houston area was subjected to an estimated 24.5 trillion gallons of rain, submerging 30 percent of Harris County. The storm itself was a lethal combination of competing weather systems, bringing the storm to a standstill over the coast of Texas, and triggering a 1-in-1,000 year flood.i  To be clear, any city, no matter how well-prepared, would have been overwhelmed by Harvey, but it was Houston’s old and aging infrastructure that left it uniquely exposed.

The “Bayou City” of Houston sits precariously on old swamp land, at sea level, just 40 miles from the coastline. A web of bayous dissects the city’s center, which is surrounded by miles of impervious concrete. Due to the city’s location and topography, it has a long history of massive floods. Recent floods in 2015 and 2016 caused $1 billion in damages from flooding 16,000 buildings, and in 2001, Tropical Storm Allison caused 22 deaths and $5 billion in flood damage. A lack of both zoning regulationsii and regional coordination have increased the area’s susceptibility to flood damage by allowing extremely rapid expansion, including atop dangerous floodplains. As the city has doubled in population over the last 30 years, so has the number of highways, roads, parking lots, and buildings, with minimal attempts at environmental mitigation. With unrestrained development, the sprawl of concrete crept further and further out, covering over previously absorbent land. The city’s current flood management infrastructure of canals, ditches, and retention ponds are nearly a century old, and designed for small scale flood prevention. This combination of smothering layers of concrete, insufficient infrastructure, and a flood-prone location, has left the city highly vulnerable to catastrophic storms. 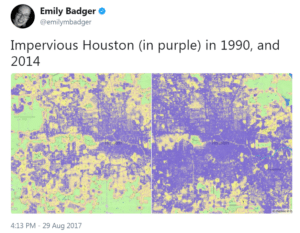 As Texas mourns the loss of life, aids those who have been displaced, and secures dangerous chemical plants, questions will naturally turn towards preventing this disaster from happening again. Climate change is increasing the occurrence of severe weather events. Hurricane Harvey is Houston’s third major flood in the past three years. If Harvey is a glimpse into the future of weather, Houston and cities around the world will need to develop more resilient infrastructure for stormwater management. Several cities in the United States have started to develop innovative solutions to both mitigate the damage from regularly occurring storms and help lower the impact of a cataclysmic deluge.

To properly manage stormwater, cities must first solve the concrete problem. Traditional city infrastructure primarily relies on storm drains to prevent flooding. When storms occur, the rainwater pools on concrete surfaces until it reaches a storm drain, where it is ushered through a series of tunnels, potentially a treatment and filter system, and discharged into a nearby body of water. This discharge can cause severe environmental problems, as the water pulls grime, pollutants, and trash from the street and flushes it downstream. And, as seen in Houston, when concrete is all there is, this system can also be easily overwhelmed by large rain events. Federal law requires cities to manage stormwater to minimize pollutants being carried into waterways; this provides an opportunity to design systems that can also withstand record-setting storms.

To mitigate both the pollution (as required by the federal stormwater regulations) and minimize the risk of flooding, cities have begun to develop a suite of “green” and “gray” infrastructure solutions, from gardens to mega-construction projects. On the mega side, North Dakota and Minnesota are building a $2.2 billion flood diversion project with the Army Corps of Engineers to prevent flooding in the Fargo-Moorhead area by redirecting flood water through 30 miles of channels. Also in the Midwest, in compliance with federal requirements on restricting combined sewer overflows, Chicago is currently constructing the $4 billion Deep Tunnel, also known by its bureaucratic name, the Tunnel and Reservoir Plan, or TARP. When completed in 2029, Deep Tunnel will connect 109 miles of tunnel with three massive reservoirs that can contain a combined 20.6 billion gallons of water. 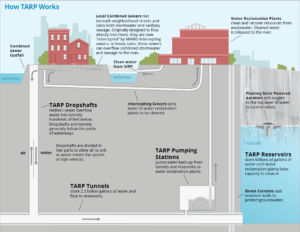 Smaller scale solutions can also effectively mitigate the concrete problem. In parallel to the Deep Tunnel, Chicago has joined Philadelphia and others in installing permeable pavement that allows rain water to be absorbed, rather than being redirected to storm drains. Alleys, streets, sidewalks, and parking lots all represent opportunities to install porous surfaces to reduce the risk of flooding. Additionally, low-cost and low-impact solutions like parks, bioswales, and green rooftops can use nature to our advantage by absorbing water and acting as natural filters. Philadelphia has gone as far as implementing a pair of incentive programs that provide grants to homeowners and businesses to construct stormwater retrofits. To pay for such efforts, Washington, D.C., has created an innovative financing tool by issuing the nation’s first environmental impact bond, which will finance the development of a series of permeable pavement projects, raingardens, and rain barrel systems.

A crucial step of the recovery from Hurricane Harvey must include similar preventive measures, at both the mega and micro scale. Houston’s topography and location guarantee that more floods will occur, but the Harris County Flood Control District currently only spends $100 million per year, a pittance compared to the projected $26 billion needed to widen the bayous, which is only part of a robust long-term flood control plan. However, even with a dramatic investment in stormwater management, completely avoiding damage from storms the size of Hurricane Harvey is not realistic. Even Chicago’s massive Deep Tunnel storage system would have been overrun by the trillions of gallons of rain. But by combining a full suite of these green and gray infrastructure solutions, cities can prevent damage from smaller storms and lessen the impact of disastrous ones.

iThe 100-year, 500-year, and 1,000-year flood categories are actually misleading metrics that are based on probability, which is changing with the climate. Vox’s Dara Lind provides a detailed explanation of the metric here.

iiZoning policy is a delicate balance for urban planners. Strict zoning regulations can stifle development and drive up housing costs, leading to flood-susceptible sprawl, while in their absence, overdevelopment can occur, which may neglect environmental protections and create development within dangerous flood plains.