Now that the United States has convinced Turkey to join the international coalition fighting ISIS, operations against the extremist group are expected to pick up pace. U.S. air assets, including armed drones and F-16s, are now arriving at Turkish airbases that are much closer to ISIS targets than the bases U.S. forces had been using?allowing increased, faster, and longer missions to be flown. But bringing Turkey into the conflict also seems to be having an unintended consequence: causing some of the most effective forces confronting ISIS on the ground?some of them U.S. partners, some not?to abandon the fight. This could severely constrain U.S. policy options going forward.

With the United States and Turkey ruling out putting boots on the ground in Syria, who are the effective players and are they viable partners in the fight against ISIS?

The Syrian Kurds, supported by U.S. airstrikes, have had recent successes taking territory in the north of Syria from ISIS, cutting off the extremist group’s main stronghold, Raqqa, from a major supply route.

But Turkish President Recep Tayyip Erdogan has begun bombing the Turkish Kurdish PKK in an effort to regain his waning political power. These bombings of PKK members have called into question Syrian Kurds’ continued alliance with coalition forces, given the close ethnic and ideological connection between these two Kurdish groups and the important role of the PKK in supporting the Syrian YPG. While momentum should be on the side of the Syrian Kurdish militias following commitments of American air support, Turkish opposition to Kurdish control of northern Syria could lead the YPG to cease offensive operations against ISIS in protest and stymie ground operations in the area. Barring an unforeseen halt in Turkish strikes against the PKK, the Kurds are unlikely to continue playing the pivotal role against ISIS that they have thus far.

ISIS has encountered little resistance from embattled Syrian President Bashar al-Assad’s army, which some speculate has been spread too thin to effectively engage the jihadist group. Others have long postulated that Assad has formed an uneasy ceasefire with ISIS in the interest of both groups, who face numerous other enemies.

Though recent airstrikes and 60 U.S.-trained fighters have supported Free Syrian Army (FSA) forces, the moderate opposition in the country has thus far demonstrated a mixed record of success and failure. Having fielded just over one percent of the original goal of 5,400 recruits annually, the Pentagon has struggled in recent months to defend the program, claiming that hundreds of applicants were still in the early stages of vetting. Following the training of 60 FSA fighters on an American base, rebel leader Farhan al-Jassem was captured by the Islamist al-Nusra front, raising questions about the investment in such a tenuous organization.

The Army of Conquest: Jaish al-Fatah

While the FSA continues to face setbacks, another group of fighters has been having much more success on the battlefield. Known as “The Army of Conquest,” Jaish al-Fatah is an umbrella organization that unites ideologically distinct Islamic extremist opposition groups against ISIS and Assad regime forces.

Founded in March 2015, Jaish al-Fatah sought to bring together splintered jihadist groups from across Syria in order to break a stalemate with government forces and turn back the encroaching threat of ISIS from the east. Membership lists are ambiguous and shifting, as smaller groups come in and out of power and local-level politics influence alliance. Jaish al-Fatah’s leadership is not publically known, though fighter Abu Muhammad Holandi has acted as spokesman for the organization in the past.

While the roughly dozen member groups are typically dynamic, three are of particular note due to their size and affiliation. The al-Nusra front, which contains approximately one third of Jaish al-Fatah’s active fighters, is explicitly allied with al-Qaeda, and has also recently demonstrated opposition to the U.S.-Turkish alliance against ISIS, which al-Nusra leaders claim focuses too little on evicting Assad. Secondly, Ahrar ash-Sham contributes roughly another third of fighters, many of whom are practicing Salafis and sent condolences to Taliban leader Mullah Omar’s supporters upon news of his death. Further, Jund al-Aqsa, another important group within the umbrella, is known to be a strong al-Qaeda front organization. Most of the individual groups within Jaish al-Fatah are jihadist in nature, and advertise their battles as part of a larger jihad for a repressive form of Islamic governance.

Even the most radical members of the umbrella group have promised not to discuss affiliation during campaigns, leading to major victories in Idlib Province in April against government forces. In this campaign and others, Jaish al-Fatah has collaborated strategically with the Free Syrian Army.

While many of the members and allies of Jaish al-Fatah may be benign, key elements of the organization are actively anti-American and not motivated to ensure the best outcome for the region. The group is committed primarily to ousting the Assad regime from power, and has attempted this through a systematic campaign of ?liberation’ of towns under regime control. As an umbrella organization, however, Jaish al-Fatah seems to mostly act in unison in order to overcome enemy forces in the short term. It is uncertain if, despite Islamist stances, the groups composing Jaish al-Fatah would be able to agree on political goals following a victory over regime forces nationwide.

The organization maintains pockets of support throughout western and northwestern Syria, with its most recent advances coming in the fertile, northern al-Ghab plain. The group has, like many others, used Twitter and other social media to keep up recruitment among primarily Sunni Arab men as it has gained influence over more territory within the last half a year. Though no nation explicitly endorses the front, individual members have been successful in receiving aid from donor countries invested in the civil war. By working jointly, the member groups have been able to coordinate anti-tank missiles, light arms, and funding from nations like Saudi Arabia and Turkey, who have allegedly selected ?pet’ fronts to fund due to slight ideological distinctions.

The current American relationship with Jaish al-Fatah is a complicated one; as recently as late July, the United States bombed the al-Nusra front for abducting American-trained fighters. Simultaneously, many of the other Sunni Islamist organizations that comprise the front have proven instrumental to rebel successes against the Assad government and ISIS. Though it appears that the United States does not explicitly back current constituent groups, many members of the American-supported and now disbanded Harakat al-Hazm rebel group have likely joined the group. Little has been said by State Department officials regarding America’s stance on Jaish al-Fatah as a whole. 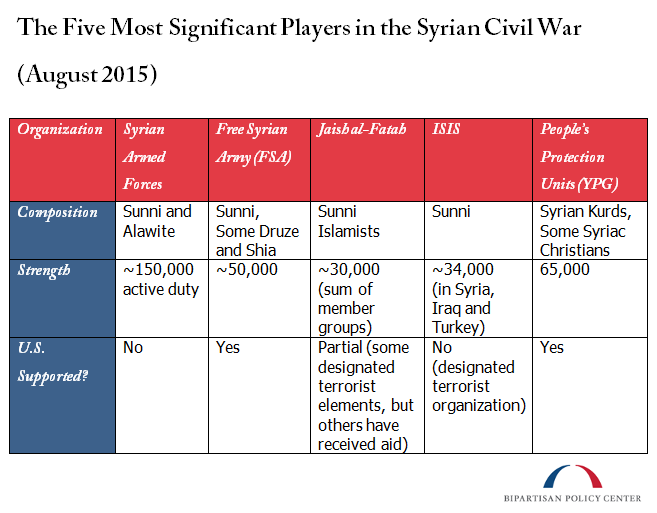 Though it is tempting to consider arming, training, and supplying the most effective forces battling America’s primary enemies in Syria, it is important to consider the potentially damaging consequences of doing so.

While some of their interests align with those of the United States, what would a victory for these groups mean? Underlying a non-religious and apolitical temporary alliance lays Islamic extremism, which may prove as deleterious as ISIS. For now, supporting the right allies should take priority over supporting the most effective ones.

In this vein, the United States must take care not to alienate its current Kurdish partners, who could be dissuaded against further offensives if they believe the United States supports Turkey in attacks against the PKK. Lacking other allies, the United States should look for ways to reiterate American support for the YPG by pressuring Turkey’s leaders to return to the peace process instead of retaliating against Kurds. To effectively fight Islamic extremism and ISIS, however, a careful balance must be struck between an alliance with Turkey for use of their airbases and U.S. backing of Syrian Kurdish forces on the ground.

An Overview of ISIS Threat and U.S. Response