The Kurdistan Regional Government (KRG) is scheduled to hold a referendum on September 25 on whether it will seek independence from Iraq. If the vote goes forward as planned, despite opposition from Washington and other countries in the region, it will almost certainly result in an overwhelming mandate for Kurdish independence. What happens next will have dramatic implications not just for Iraq and the Kurds but also for the future of the entire region, including America’s fight against ISIS and efforts to contain Iran.

Since the creation of modern Iraq after World War One, the country has experienced a series of revolts seeking independence for the country’s Kurdish population. The most recent, following the First Gulf War in 1991, prompted a brutal response, in which Saddam Hussein’s forces infamously used poison gas on Kurdish civilians. As a result, Washington instituted a no-fly zone in northern Iraq that helped Kurdish forces (the peshmerga) achieve de-facto independence. In 2003, this status was formalized in the new Iraqi constitution, which created the Kurdistan Regional Government as part of a federal Iraqi state. Since then, Baghdad and the country’s Kurdish leadership have clashed over the division of the country’s oil revenues, the status of oil rich, contested regions like Kirkuk, and, more broadly, the irreconcilability of the Kurds’ desire for independence and Baghdad’s desire to maintain its territorial integrity.

The decision to hold a formal referendum for independence reflects a series of developments within Kurdistan and the region. First, the KRG’s role in defeating ISIS has strengthened their hand considerably. When Iraqi forces fell, Kurdish peshmerga stopped ISIS’s advance, then occupied Kirkuk and its oilfields with little opposition. Subsequently, the Peshmerga also played a crucial role, alongside Iraqi forces, in the campaign to retake Mosul from ISIS.

But the second main reason for holding the referendum now is to distract from Kurdistan’s increasing domestic difficulties and divisions. The KRG has long been divided between two family-based political movements, which in the past have even fought against each other when not fighting the Iraqi state. The KRG’s presidency is held by Masoud Barzani, whose Kurdistan Democratic Party (KDP) controls the northwestern part of Iraqi Kurdistan. The southeast, meanwhile is controlled by the Talibani family and its affiliated party, the Patriotic Union of Kurdistan (PUK). Since 2014, the rise of ISIS and the fall in global oil prices has created an economic crisis in the KRG, increasing unemployment and popular frustration over corruption. Barzani’s term as president also came to an end in 2013, and his efforts to extend it extra-constitutionally (using the fight against ISIS as justification) ultimately led to the forced suspension of the country’s parliament.  Against this backdrop, Barzani’s decision to hold a referendum on independence serves as a way to mobilize support around a patriotic cause. And it puts his opponents in the awkward position of either having to throw their support behind him or risk opposing a cherished national dream.

The biggest obstacle to Kurdish independence is that, besides the Kurds, no one else supports it. The Iraqi government in Baghdad is not 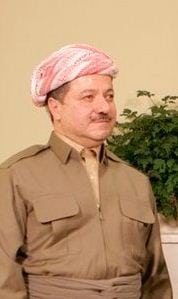 only opposed to Kurdish independence in principle, but specifically to the KRG’s decision to include contested regions like Kirkuk. Turkey, which borders the KRG to the north, has developed close ties to the Barzani government, and Turkish businesses are active in the KRG. But Turkey, which is fighting its own war against Kurdish separatists in its own country (and now Syria) fears that Kurdish independence in Iraq could set a dangerous precedent. Similarly Iran, which borders the KRG on the east, has strong political and economic ties, particularly in the Talibani-affiliated region, but is also worried about the impact Kurdish independence will have on its own Kurdish population. Perhaps more importantly, fears that an independent KRG with close ties to Washington will strengthen the U.S. hand in the region.

Ironically, despite being the KRG’s biggest international supporter, the United States, which has fought to keep Iraq together since 2003, is also opposed to the referendum.  Washington fears that a divided Kurdistan facing widespread opposition from its neighbors could prove unstable, giving new opportunities for ISIS and Iran to exploit its weakness. At the same time, Kurdish independence could also create destabilizing conflict with Iraq, and undermine moderate politicians in Baghdad.

Despite all the pressure he has faced to cancel or postpone the referendum, Barzani claims it will proceed as planned. If he plans to postpone it, or in a conciliatory gesture exempt contested territories from the vote, he will have to make an announcement soon (and almost certainly demand something in return). If the referendum goes forward, the results will also matter. Given that almost all Kurdish voters support independence, too many defections will look bad for Barzani, and likely represent opposition to his leadership as much as the referendum itself.  If the referendum does include contested territories like Kirkuk, the result there, assuming it is perceived as fair, will be important. Has the KRG leadership been able to convince the non-Kurdish population (consisting of Arabs, Turkmen and others) in cities like Kirkuk to support a future with Kurdistan?

Barzani has stated that a successful referendum would not lead to an immediate declaration of independence, but rather will give him a mandate to open negotiations with Baghdad over Kurdistan’s future. Yet if the resolution passes with an overwhelming majority, an embattled Barzani will face considerable pressure to deliver results. And given how much de facto independence the KRG enjoys today, there is little room for additional steps that fall short of formal independence. If Washington cannot persuade Barzani to postpone the referendum, and give him a way to save face while doing so, the challenge will be to carefully manage the post-referendum diplomacy. Keeping the KRG strong and unified against ISIS while helping it avoid destabilizing conflict with its neighbors will require a deft, but crucial, balancing act.

One Year After Turkey’s Coup Attempt