The Trump administration has pointed to a joint Department of Justice and Department of Homeland Security report on federal prison inmates to justify its claims about the criminality of immigrants, a report we previously analyzed on this blog. While federal prisons do hold a large number of non-citizens, the majority of incarcerated persons in the United States are in state and local prisons or jails, not federal prisons. But a lack of data from the state and local levels on the number of non-citizens, much less potential unauthorized immigrants, in these jails and the crimes they committed makes it difficult to use incarceration data to determine whether non-citizens commit crimes at higher rates than citizens.

The absence of data on the criminal profile of non-citizens in state prisons and local jails largely stems from the lack of processes to gather this information. State justice agencies and sheriff’s offices that operate state prisons and local jails usually do not have systematic procedures for gathering information on non-citizens in their facilities, a stark contrast from the federal government, which regularly collects some data about the non-citizen population in federal facilities. The federal report on non-citizens in DOJ custody openly acknowledges this issue, noting that state and local facilities “do not routinely provide DHS and DOJ with comprehensive information about their inmates and detainees.”

Other government reports support DOJ and DHS’s observations. A September 2016 Congressional Research Service (CRS) report on criminal alien programs notes that these facilities may use varying classifications for non-citizen prisoners, if they even collect this data. In the case of state prisons, some states report data on non-citizens while others include all foreign-born individuals, without regard to their citizenship or immigration status, which may include naturalized U.S. citizens. Two Government Accountability Office reports on criminal alien statistics in 2005 and 2011 made similar points, noting that state and local facilities largely track individuals with specific criminal histories that generate reimbursements from the federal government through DOJ’s State Criminal Alien Assistance Program, but not systematically across their entire populations. 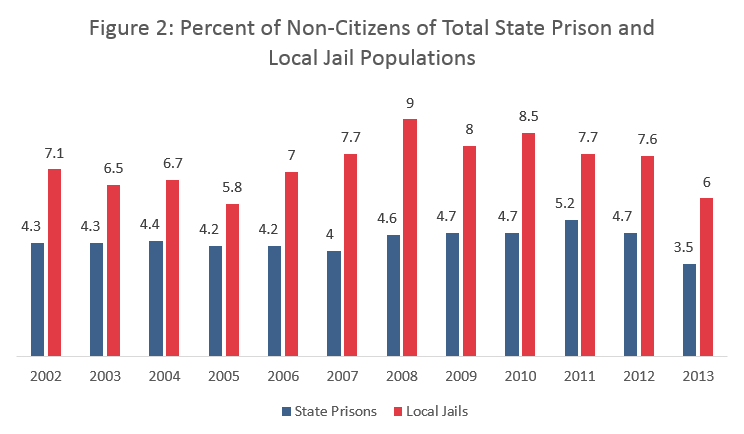 As we noted our previous post, federal data shows that federal prisons hold significantly more non-citizens, at 21 percent of the total population. The high number of non-citizens that commit immigration violations?a federal offense?would almost ensure that more immigrants would enter into the federal prison system. In the case of state and local facilities, however, authorities have convicted these individuals for violating state and local criminal statutes and ordinances. Without any additional information about these violations or the rest of the inmates of these facilities, however, authorities do not know very much about the size and profile of non-citizen population in these facilities.

The absence of standardized data on the non-citizen population in state and local detention facilities is critical to the immigration debate for two reasons. As the federal report notes, state and local facilities oversee 90 percent of the total U.S. incarcerated population, making this data essential to a full understanding of the non-citizen population in the criminal justice system. Access to reliable information on the size of this population and a comprehensive breakdown of their convictions would provide a better measure of their criminal profile and improve the capacity of policymakers to accurately assess the types of crimes committed by these individuals at the state and local level.

This data gap also has implications for the debate over “sanctuary cities,” jurisdictions that limit cooperation with Immigration and Customs Enforcement (ICE). Without this data, officials cannot determine whether complying with ICE detainer requests leads sheriff’s offices to refer larger numbers of non-citizens to ICE for processing, meaning advocates or critics of sanctuary policies can over- or understate how responding to detainers impacts the size of the non-citizen jail population. Additional information about this population would help lawmakers develop better responses to addressing issues related to non-citizens committing offenses in the United States.

Despite this data’s utility to policymakers, legal conflicts between jurisdictions that limit cooperation with ICE and the federal government may hinder gathering this information. Under federal statute, law enforcement agencies that gather immigration or citizenship status information about their arrestees or prisoners cannot be prohibited from sharing this data with ICE. Some jurisdictions that restrict their cooperation with ICE have also created policies against collecting this data to reassure immigrant communities that ICE will not access this information. DOJ has interpreted the requirements for various federal law enforcement grants to include compliance with this section of law. However, jurisdictions that refuse to collect this data assert that they do not violate this provision since they do not have any information to share. Collection of non-citizen data in jails would have to navigate these tensions between different levels of local law enforcement and federal authorities on enforcing the nation’s immigration laws, making it unlikely in the near term for any change in the status quo.

How Do Immigrants and the Immigration Enforcement System Interact with Local Law Enforcement?