A recent joint report by the Department of Justice and Department of Homeland Security, required by President Trump’s executive order on immigration enforcement in the nation’s interior, provides a snapshot of the foreign-born population in federal prisons, but it also makes clear that existing data about this population does not provide an accurate assessment of the overall rates of crime by documented and undocumented immigrants.

The report, released in December 2017, is the first quarterly assessment on the immigration status of aliens in federal, state, and local prisons, detention centers, and jails. While the report found that aliens who are unlawfully present form significant portions of the federal jail populations, the majority of persons incarcerated in the United States are in state and local jails, not federal prisons, and the report acknowledges that it lacks good data on state and local jail populations. Further, the prevalence of convictions for immigration crimes, which are only prosecuted at the federal level, also increases the number of foreign nationals in federal prisons.

The report noted that DOJ had 58,766 known or suspected aliens in its custody, with the Federal Bureau of Prisons (BOP) and the U.S. Marshall Service (USMS) overseeing 39,455 and 19,311 individuals in custody, respectively. In BOP facilities, known or suspected aliens, the term used in the report for individuals who are non-citizens and non-nationals, accounted for 21 percent of all federal inmates.

Besides the DOJ/DHS Report, Bureau of Justice Statistics (BJS) incarceration data also confirms that non-citizens, namely lawfully and unlawfully present individuals from other countries, form a significant portion of the populations in federal prisons. As Figure 2 shows, the number of non-citizens in these facilities largely peaked in 2011 before dropping off slightly in 2014: 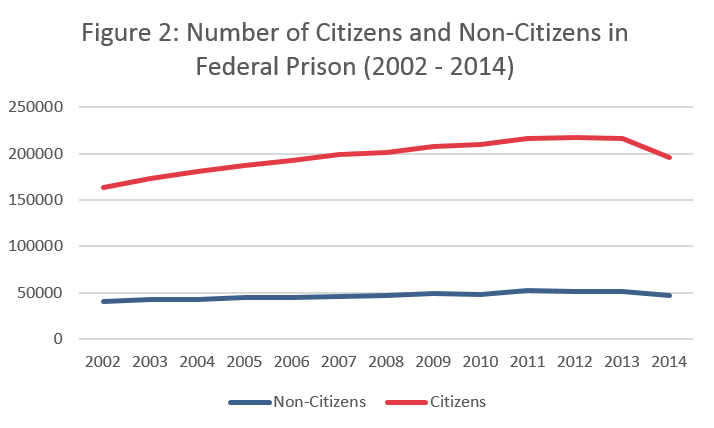 Non-citizens also represent significant percentages of the total federal prison population. As Figure 3 demonstrates, immigrants formed over 23 percent of the total population in federal prisons between 2002 and 2014 with the exception of 2007 and 2010. Given that BJS does not track the legal status of non-citizens in federal prisons, it is difficult to track how the undocumented prisoner population changed in these facilities due to factors such as the Bush and Obama administrations’ immigration enforcement policies. 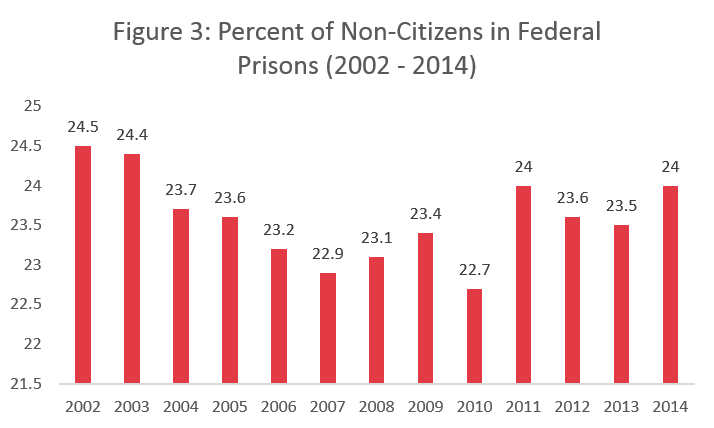 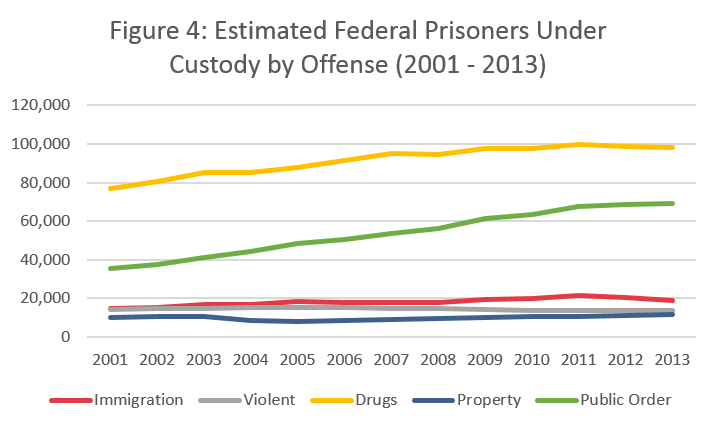 The large number of individuals in federal prisons for immigration violations does not necessarily serve as a corollary for criminality. As Figure 5 demonstrates, immigration violations were the most serious offense for 8.9 percent of all prisoners under federal correctional authority in 2014, 8 percent in 2015, and 7.7 percent in 2016. While it is possible that these individuals could have committed other crimes, it is unlikely that their immigration violations, including offenses such as illegal entry or reentry that were prosecuted as crimes, would supersede more serious criminal charges such as violent or drug crimes. 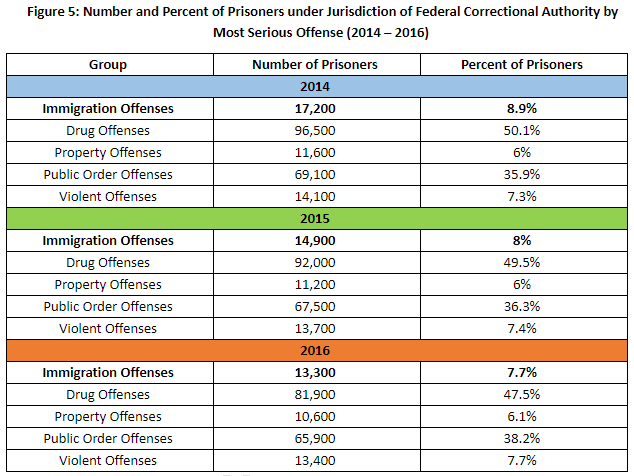 To be sure, the BJS data in Figure 5 does not preclude instances where individuals who committed serious crimes such as drug or violent offenses also violated federal immigration laws, which is a lesser offense. The data in Figure 5 also does not rule out the possibility that these figures may shift when examining the offenses of non-citizens in federal prisons. Given that existing BJS data does not break down the offenses for citizens and non-citizens, however, it is difficult to assert that all federal prisoners who violated federal immigration laws also committed more serious crimes.

This last point highlights several issues about the use of federal prison data to make broader claims about the criminality of non-citizens in federal custody. As this report demonstrates, BJS data shows that immigration offenses represent a significant number of offenses committed by individuals in federal custody, which reflects the enforcement measures of past administrations in arresting and prosecuting individuals for these violations. However, this data does not track how many individuals who committed serious crimes also violated immigration laws nor their citizenship and legal status, making it difficult to assert that a large number of undocumented immigrants are serious criminals. Until DOJ publishes data that breaks down the different offenses committed by non-citizens in its facilities, the existing data will only provide a snapshot of this population that does not support broader assertions about their criminal profile.

How Do Immigrants and the Immigration Enforcement System Interact with Local Law Enforcement?

SCOTUS and DACA: What Comes Next?