Washington, DC – The COVID pandemic and recession could hasten the depletion of Social Security’s trust fund reserves by several years—to 2030, if the current downturn ends up being as severe as the Great Recession—according to an updated analysis published today by the Bipartisan Policy Center. Prior to the recession, these reserves were projected to run out by 2035.

This new analysis builds on BPC’s prior findings released in an April 2020 blog post. The report models how four scenarios for an economic recovery—ranging from historically slow to rapid—would affect Social Security’s finances. Even in the rosiest of the four scenarios, the combined Old-Age and Survivors Insurance (OASI) and Disability Insurance trust funds are depleted by 2034, a year earlier than pre-COVID projections. 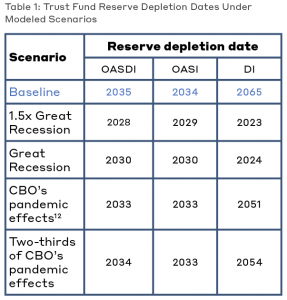 A number of factors contribute to the earlier trust fund exhaustion dates found in BPC’s analysis, but chief among them is reduced revenue—especially lower payroll tax revenues due to increased joblessness.

The brief’s authors, BPC’s Nicko Gladstone and Shai Akabas, argue that the “coming crisis,” now expected to arrive sooner than projected by Social Security’s trustees earlier this year, means that lawmakers must take swift action to shore up the program’s finances.

“The closer these dates draw—particularly for OASI—the more drastic and unpalatable any solution that maintains the traditional financing structure of the program will have to be: Tax increases will be sharper, benefit cuts will be more severe, and the cohorts of workers who bear these changes will have less time to plan their finances accordingly,” write Gladstone, research analyst, and Akabas, BPC’s director of economic policy.