Last week, the Bipartisan Policy Center (BPC) affirmed our estimate that the debt limit X Date ? the point at which the Treasury will be out of borrowing authority and will lack sufficient cash to make all payments owed in full and on time ? is likely to occur between October 18 and November 5, if action is not taken to increase or suspend the debt limit. As of Tuesday, the federal government has entered a partial shutdown, as policymakers failed to pass any appropriations bills that fund many services. We have received numerous inquiries about whether a short or extended shutdown could delay the X Date, buying more time for policymakers to address the debt limit. Our analysis indicates that a short shutdown of a week or two would have a negligible impact on government spending. While a longer shutdown could have a more significant impact, there is not enough time between now and our projected X Date window for a shutdown to change the X Date by more than a couple of days.

To arrive at this conclusion, BPC reviewed data from the last government shutdown, which took place over three weeks in December 1995 and January 1996. We examined select categories of spending during that shutdown and compared them with spending during the equivalent three week period in the previous year (December 1994 and January 1995) and the following year (December 1995 and January 1996).1 We found very minor differences, if any, in spending among these periods. For instance, spending on federal salaries, which should be among the first categories of spending affected by a shutdown, was $3.74 billion in the 1994/5 period, $3.66 billion during the 1995/6 shutdown period, and $4.01 billion in the same period the following year. Had there not been a shutdown in 1995/6, we would have expected federal salaries to be slightly higher, but the fact that this spending was not substantially lower during the shutdown is striking.

A significant difference between 1995/6 and the current shutdown is that prior to the extended shutdown in 1995/6, seven appropriations bills had been passed, including for the Department of Defense ? the largest federal employer. As such, there were no furloughs of defense civilians. This year, active military will be paid (because special legislation was passed to continue their funding), but defense civilians are subject to furloughs, so we would expect a somewhat larger reduction in spending on federal salaries during this shutdown. Important to note, however, is that much salary spending scheduled to go out over the next few weeks will be for work that was done in September ? before the end of Fiscal Year (FY) 2013 ? and will therefore still be paid regardless.

Many other categories of spending, itemized in the table below, showed little difference between shutdown and non-shutdown years. For some, such as Supplemental Nutrition Assistance Program benefits (food stamps), this is because the program is funded through mandatory instead of annually appropriated (discretionary) spending, and is thus unaffected by a shutdown. For others, such as highways and energy, the lack of difference can be explained by the fact that the relevant appropriations bills for those departments had already been passed, leaving those programs unaffected.

An interesting contrast, however, is apparent with the Department of Education, which had not been funded at the time of the 1995/6 shutdown. While not enormous, spending on those programs dipped noticeably during the three-week period. Since no appropriations bills have been passed prior to this shutdown, one might expect to see similar patterns in other discretionary parts of the federal budget. Still, there will be significant amount of spending that still occurs in those departments during a shutdown, as much of the funding will stem from leftover FY 2013 appropriations. Housing program funding exhibits this lag, and even though the relevant appropriations bill had not been passed during the 90s shutdown, its spending was unchanged from the same period in adjacent non-shutdown years. 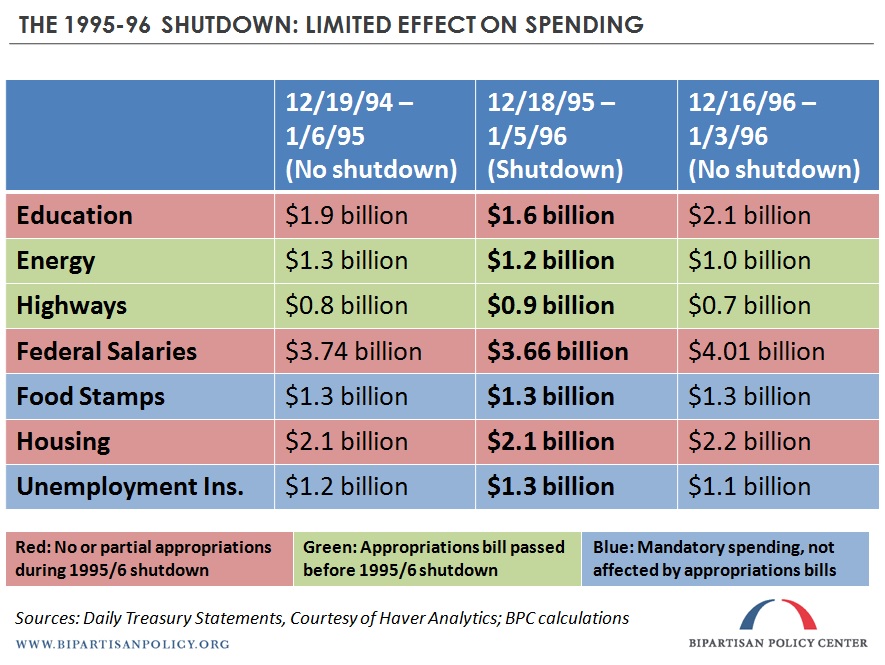 A final interesting point that will likely have a modest offsetting effect (i.e., produce more spending in a particular category than would occur under normal circumstances) is the fact that furloughed federal employees are eligible to collect unemployment insurance benefits until they resume their work.

Overall, a prolonged shutdown could have a small impact on the timing of the X Date, but in the scheme of total federal government cash flows, we would not expect any more than a $10-$15 billion reduction in federal spending prior to our projected window. This is not enough to change our best estimates by more than a few days.

The largest sources of uncertainty in BPC’s X Date window are daily revenues, which are volatile, and the exact amount of military retirement benefit accruals that took place on October 1. We expect to have this figure, and then update our X Date window in the near future.

1 Because historical Daily Treasury Statement data from before 1998 is not publicly available, we would like to acknowledge Haver Analytics for providing BPC with access to their database for this analysis.