For the last five years, the Department of Defense’s base budget has been cut by nearly a trillion dollars (This statistic is based on a comparison between the actual DoD Base Budget Authority from FY 2012-FY 2017 to the FY 2012 Future Years Defense Report figures for the same time period). These cuts, caused by the sequestration triggered by the Budget Control Act, have had a devastating impact on U.S. military readiness and modernization. Joint Chiefs Chairman Gen. Joseph Dunford concluded at a recent House Armed Services Committee hearing that “?without sustained, sufficient, and predictable funding I assess that within 5 years we will lose our ability to project power; the basis of how we defend the homeland, advance U.S. interests, and meet our alliance commitments.”

Despite the stated intent of President Trump and Defense Secretary James Mattis to reverse these trends, the administration’s defense budget would not accomplish that. One measure of deficiencies in the proposed defense budget is the unfunded priorities lists submitted to Congress by the different branches of the armed services. And with the administration’s budget actually cutting the critical Operations and Maintenance fund over the next ten years, it seems as though relief from sequestration might come later than expected.

The most recent unfunded priorities lists submitted by the Army, Navy, Air Force, and Marines are asking for another $32 billion on top of the $574 billion the administration requested for defense. The chart below shows where the Defense Department’s base budget would be if the services received the additional $32 billion, shown in yellow. The lists, obtained from the congressional appropriations committees, focus heavily on readiness and modernization. 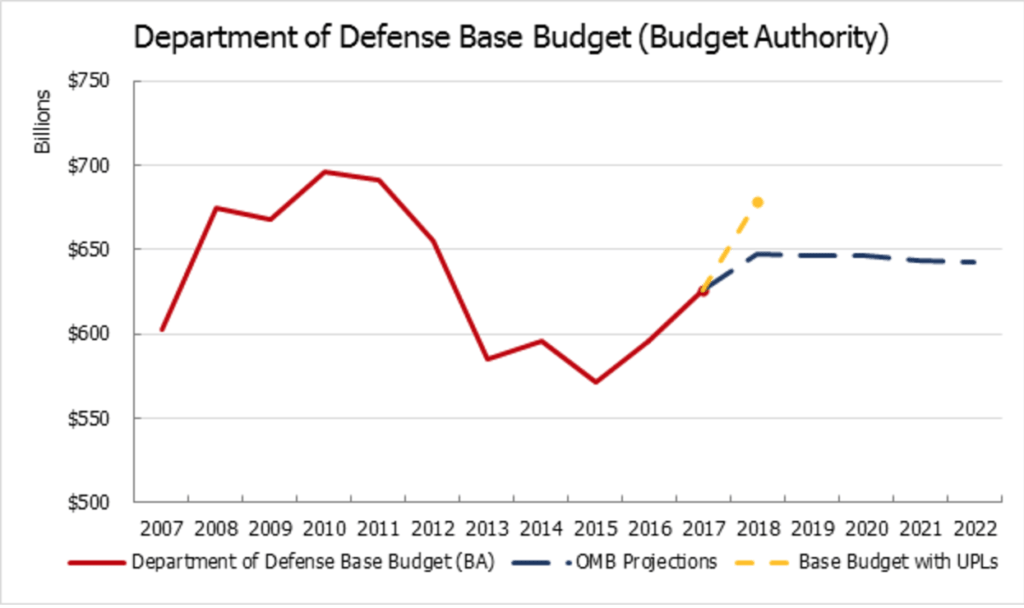 In the chart above the red line shows the base defense budget, the blue line shows where the Office of Management and Budget predicts the budget will go in the next five years, and the yellow line shows the military’s unfunded priorities lists.

Even President Trump’s proposed increase for FY 2018, as shown in the chart, does little to revive the Defense Department’s topline (proposed Budget authority for FY 2018 is 1.3 percent lower than actual Budget Authority for FY12).

What are Unfunded Priorities Lists?

Each military branch uses different equipment, staff, and logistics to accomplish its goals. These differences are reflected in their unfunded priorities lists:

How it Adds Up

If Congress were to include the approximate $32 billion in unfunded priorities into the FY18 defense appropriations package, the Defense Department’s base budget funding would rise from $574 billion to $606 billion. The additional request for Overseas Contingency Operations (OCO is submitted separately from the base defense budget on a yearly basis) would bring these totals up to $639 billion and $671 billion respectively (the FY18 OCO request is $65 billion). The $639 billion level, combined base defense budget with OCO, is approximately the funding both Senate Armed Services Committee Chairman John McCain and House Armed Services Committee Chairman Mac Thornberry have recommended as the prudent level for the upcoming fiscal year.

One of the primary reasons that the military services are asking Congress to add another $32 billion for unfunded priorities in readiness and modernization is because the high tempo of deployments and operations is taking a heavy toll on their equipment, requiring them to fix or replace it more frequently than planned. “Due to this extensive use of our equipment across the force,” Defense Secretary Mattis told the Senate Armed Services Committee in written testimony, “operations and maintenance costs have also increased, rising faster than the rate of inflation during the past 16 years.” While the president’s budget for FY18 includes an increase in the upcoming fiscal year it also includes a notable cut to Operations and Maintenance in the 10-year window. 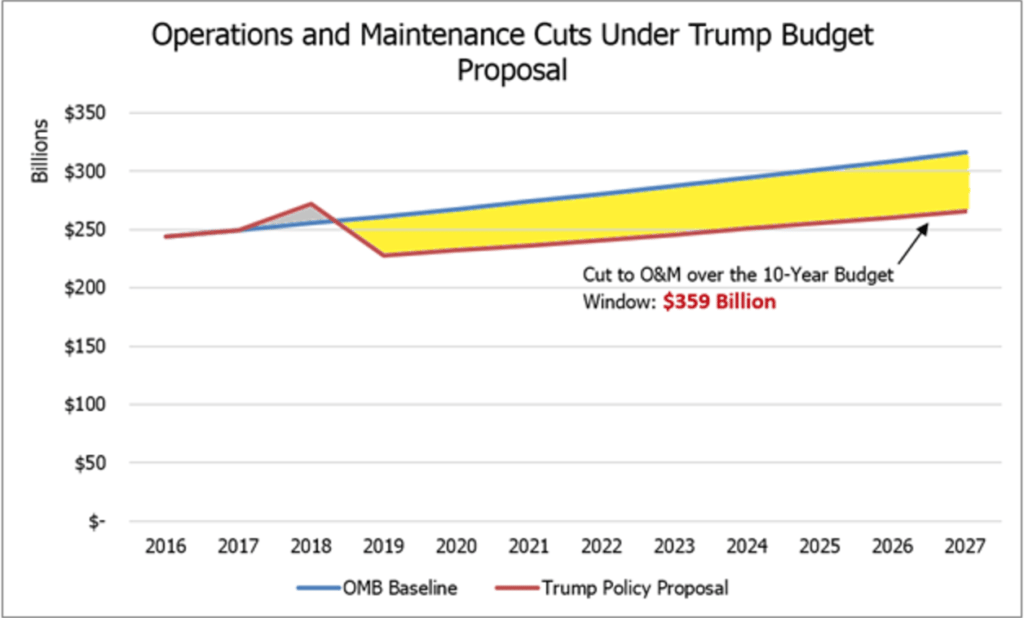 As shown in chart above, President Trump’s FY 2018 budget proposes a $359 billion cut to the Defense Department’s Operations and Maintenance budget over ten years when compared to OMB’s baseline. In light of consistent testimony from Secretary Mattis and defense leaders that operations and maintenance is crucial for funding readiness and current operations, such a cut comes as a surprise. It effectively ensures that the conditions that are driving the services to ask for unfunded priorities now will persist well into the future. At the same time as the Trump administration is asking for increased spending to secure America’s military advantage, it is laying the budgetary conditions for its continued enervation.

The unfunded priorities lists reflect, in part, the damage done to the U.S. military by the Budget control Act. General Dunford put it best during the House hearing when responding to a question from Rep. Austin Scott (R-GA) about what the military will look like in 4 years without the repeal of BCA, Dunford stated, “Congressman, we’ll have some tough choices to make and it’s either going to be a significantly smaller military–incapable of meeting the strategy?or we’ll try to maintain capacity?in which case it will be the hollow force that I joined in the late 1970s. In either case, it’s not what the United States of America needs to defend itself.”

BPC has long warned about the corrosive impact of the sequester process on readiness and operation and maintenance. The result of sequestration has led to declining numbers of trained workers in the supply chain, delayed and more expensive weapons systems, and a loss of jobs in the national economy. BPC still supports complete repeal of the BCA sequester in this year’s budget and appropriations deliberations.

Four Myths About the Defense Sequester

From Merely Stupid to Dangerous: The Sequester’s Effects on National and Economic Security