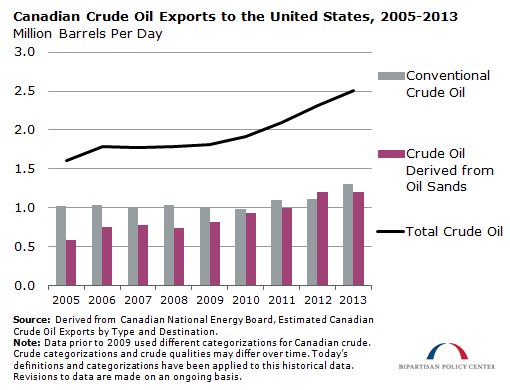 Oil sands are deposits of bitumen in sand or porous rock. Bitumen?a mixture of hydrocarbons that, at normal temperatures and pressures, is a solid or semisolid, tarlike substance?is targeted in oil-sand extraction. Since bitumen does not ?ow under ambient conditions, it must either be upgraded into synthetic crude or mixed with lighter weight crude oil to form blended bitumen before it can be transported via pipeline. 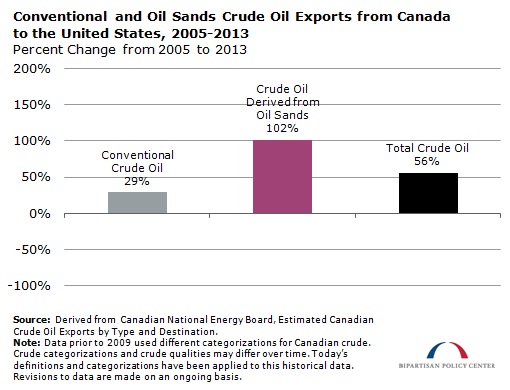 Crude oil derived from oil sands were the fastest growing category of Canadian crude exports to the United States from 2005 to 2013, growing by 102 percent. Imports of conventional crude oil from Canada grew by 29 percent during this same period.

According to data from Canada’s National Energy Board, the majority of exports of Canadian crude oil are transported to the United States via existing pipelines. While rail transport has garnered significant media and public attention for its rapid growth in the past two years, rail exports from Canada accounted for less than 5 percent of total crude oil exports in 2013. Canadian energy producers estimate that current pipeline capacity will reach saturation as soon as this year, which will increase the incentives to add additional pipeline and rail capacity.

16405
16406
Imports of oil sands crude exceed the proposed capacity of the Keystone XL pipeline by more than 350,000 barrels per day