A week after intense negotiations in Geneva between the United States, its international partners, and Iran failed to arrive at an interim deal, the International Atomic Energy Agency (IAEA) released the findings of its latest inspections of Iran’s nuclear facilities. The report shows that most measures of Iran’s nuclear program and most of its nuclear activities remain largely unchanged. Iran continues to produce 3.5 percent and 20 percent enriched uranium at roughly the same pace using roughly the same number of centrifuges as for the past year; and its stockpile of 20 percent enriched uranium has remained stable, as it continues to convert most of what it produces into reactor fuel, as it has been for the year and a half.

There is one notable exception to this trend of continuity. After a year of rapidly expanding its Natanz enrichment plant with current- and next-generation centrifuges, Iran installed almost no new machines during the last reporting period. This is a welcome development. While it does not slow – let alone roll back – Iran’s nuclear program; it does slow the advancement of its potential capabilities. This lack of new installations also raises more questions than it answers.

For more than a year, there has been a growing gulf between Iran’s actual and latent nuclear capability. In February 2012, Iran was using almost all of its installed centrifuges to produce enriched uranium. At Natanz, it had 9,156 centrifuges installed and was using 8,808 of them to enrich uranium to 3.5 percent. Similarly, the Fordow facility was using all of the 696 centrifuges installed at the time to produce 20 percent enriched uranium. Since then, however, Iran has been adding centrifuges to both facilities, without significantly increasing the number in operation. Today, Iran is still using about 8,840 and 696 centrifuges at Natanz and Fordow, respectively. But it has a total of almost 16,500 installed at the former, including 1,008 advanced IR-2m centrifuges, believed to be capable of enriching uranium faster than the current IR-1 model, and more than 2,700 at the latter.

This would also have an impact on its ability to graduate to a nuclear weapons capability. Right now, conservative estimates suggest Iran would require roughly three months to produce 20 kilograms of weapons grade uranium using just its current operating centrifuges. But with its latent capability, that window falls by half, to about six weeks.

The continued expansion of Iran’s latent capability, therefore, poses perhaps the largest breakout threat of any of its nuclear activities. That it has stopped, for now at least, means that Iran’s potential ability to breakout has also not progressed much further in the three months since the last IAEA report in August 2013. But a slowdown in the acceleration of its nuclear program should not be confused with a slowing of the program overall. Iran is not getting any further from a nuclear weapon, and that is the main metric that should preoccupy policymakers.

Nevertheless, the cessation of centrifuge installation at Natanz is meaningful. But the mere fact that Iran has not put in any more centrifuges is not enough to tell us what to think of this development. Several potential interpretations present themselves:

Because it is unclear why Iran has stopped installing additional centrifuges, the United States should continue applying pressure according to the triple-track strategy of diplomacy, sanctions and credible and visible preparations of the military option, laid out by the Bipartisan Policy Center’s (BPC) Iran Task Force, co-chaired by Senator Charles Robb and General (ret.) Charles Wald. Moreover, if diplomacy is to succeed, the growing disagreement between the White House and Capitol Hill about how to negotiate and what to demand from Iran needs to be addressed. BPC has released a proposed framework for such improved executive-legislative cooperation.

With only minor changes to Iran’s production rate of 3.5 percent enriched uranium and 20 percent enriched uranium stockpile compared to the previous reporting period, the time Iran would need to produce enough fissile material for a nuclear weapon has not changed dramatically. However, the developments detailed by the IAEA suggest the potential for major advances. 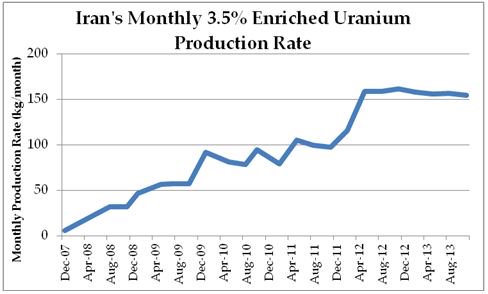 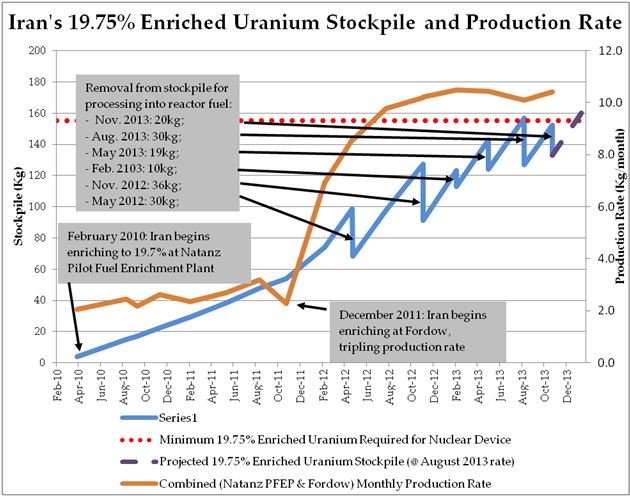 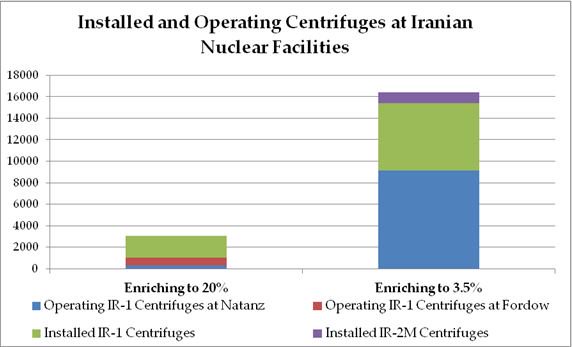 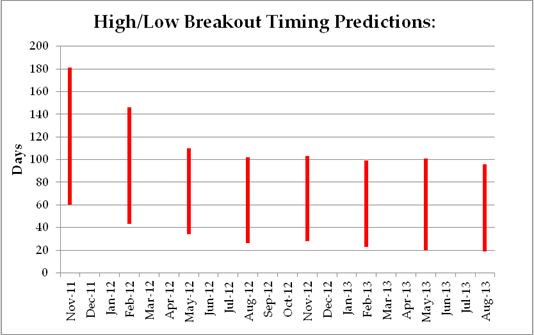 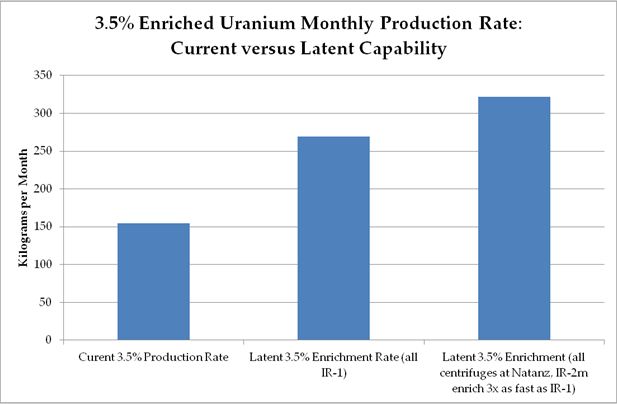 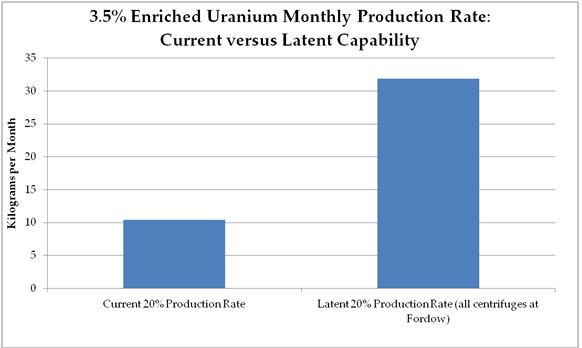 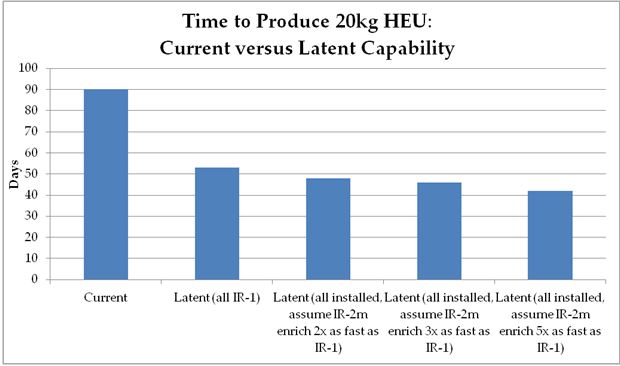 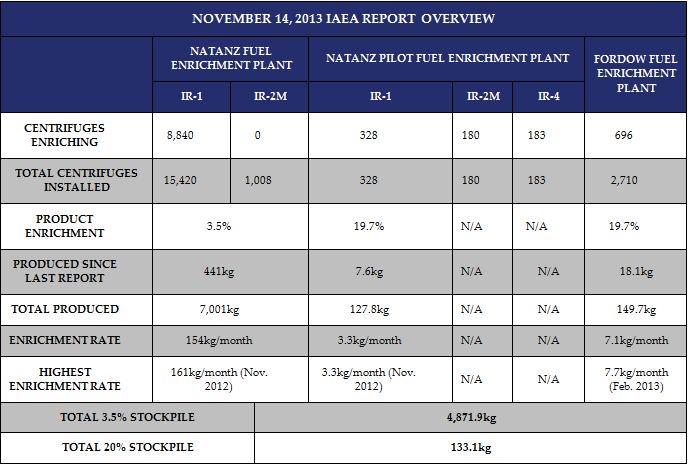 1 For enrichment, uranium must be in gas form as uranium hexafluoride (UF6). The IAEA reports its data in kilograms of UF6. However, for this paper, we will refer to solid form uranium. One kilogram of UF6 yields roughly 0.67kg uranium metal.

2 This range depends on whether Iran uses a two- or three-step batch recycling process to produce highly enriched uranium for a nuclear weapon and is based upon the work of Greg Jones at the Nonproliferation Policy Education Center. Both scenarios assume the use of the Natanz Fuel Enrichment Plant at its current production rate and drawing upon Iran’s current stockpiles of 3.5 percent and 20 precent enriched uranium. For a more detailed explanation, see here.